The money-spinning spectacle of Michael Jackson’s life after death 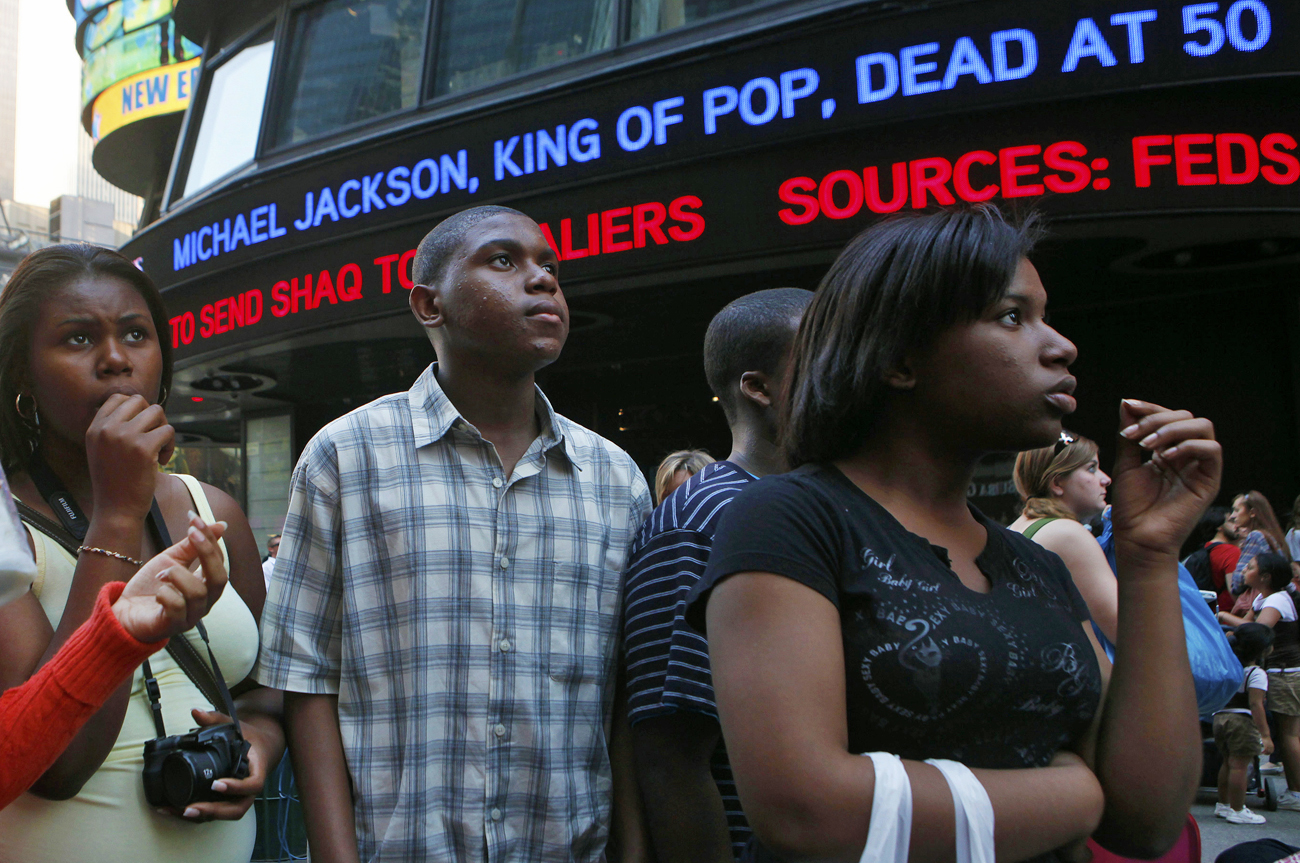 Predictably death was Michael Jackson’s ultimate career move and in the year since his demise, Jackson’s estate has amassed $1 billion. As the anniversary of Jackson’s death arrives and his popularity increasingly waxes, everybody wants a piece of the action.

If you loved Michael Jackson you can become part of a pointillism portrait being created by artist David Ilan to commemorate the superstar’s life. A collaborative online effort with MJ fans, each devotee registers a dot which is then drawn on the canvas by the artist. Hailed “the largest Michael Jackson tribute in the world”, even poet Maya Angelou is encouraging people to be one of the million tiny dots that will make the portrait.

Jackson’s family will be hosting a tribute called “Forever Michael” at the Beverly Hilton Hotel. The event is an initiative by The Jackson Family Foundation which claims to “support and carry on the legacy of Michael Jackson” by continuing his vision of “making the world a better place… every day”. Photo: Members of the Hanoi Michael Jackson fan club perform during a tribute performance to the late entertainer in Hanoi June 24, 2010. Friday marks the first anniversary of Jackson’s death. REUTERS/Kham

Other tributes include a candle-lit vigil in Jackson’s hometown of Gary, Indiana; a rerelease by The Commodores of their song Nightshift with lyrics altered to pay homage to Jackson; a documentary called “Michael Jackson: A Mother’s Story” which (surprise, surprise) features Katherine Jackson; and a CBS tribute featuring Christina Aguilera, Marc Anthony and a number of other celebrities. The US television networks have outdone themselves and there’s a plethora of rehashed documentaries featuring “revelations”, but none quite as sad and pathetic as “Michael Jackson and Bubbles: The Untold Story” by Animal Planet.

Carpetbagger LaToya features in a story about Bubbles, the chimp Jackson treated like a child until it grew up, turned violent and was shipped off to the Centre For Great Apes in Wauchula, Florida. This type of parasitic mockumentary may invoke your gag reflex, be warned.

The video shows LaToya imploring Bubbles to remember her while he alternately spits at her, turns his back on her or flat out ignores her. Even though LaToya intones his name more than 80 times, Bubbles responds by looking disinterestedly over his shoulder. LaToya starts weeping and beseeching: “Bubbles, you remember me, don’t you?” Bubbles offers a deadpan expression as he looks away. If one were to humanise the look in his eyes it must be to suggest that the ape’s thinking: “For God’s sake! Someone get this crazy woman away from me.”

What’s obvious in the onslaught of tributes is the opportunism – there’s gold to be had from Michael Jackson. Before his death Jackson was a financial disaster who was facing the foreclosure of his beloved Neverland ranch and debts of some $500 million. Six weeks after his death 4 million Michael Jackson albums were sold, and six of his albums were on the billboard Top 20. By June 2010 sales stand at some 24 million.

“This is it” the movie of Jackson’s rehearsals for his up-coming live show proved a blockbuster with Billboard reporting that the film made $260 million at the box office and took another $68 million in DVD rentals and sales.

AFP reports that earlier this year Jackson’s estate signed a 10-album deal with Sony Music Entertainment that will net the estate $250 million dollars. The deal pairs Sony and the estate in a licensing arrangement for films, stage shows and movies using Jackson’s music.

What’s apparent is that Jackson’s estate looks set to easily eclipse that of Elvis Presley’s. Jackson brought in $1 billion in comparison to Presley’s paltry $55 million last year. Jackson looks set to become bigger and financially more successful in death than he was in life.

Read more: “The boy who would be king” in Vanity Fair. See The Daily Beast’s “The year in Michael Jackson”. Read “Michael Jackson earns $1bn since death” in The Guardian.

Photo: People watch reports of the death of pop icon Michael Jackson on large screens in Times Square in New York in this June 25, 2009 file photo. Fans, museums and some members of Michael Jackson’s family will mark Friday’s one-year anniversary of the singer’s death on June 25, 2010 with special exhibits, tributes and flash mob dances from Manila to Manhattan. REUTERS/Eric Thayer