Yanks force a late draw against Slovenia. Oh, and get r...

Yanks force a late draw against Slovenia. Oh, and get robbed of victory 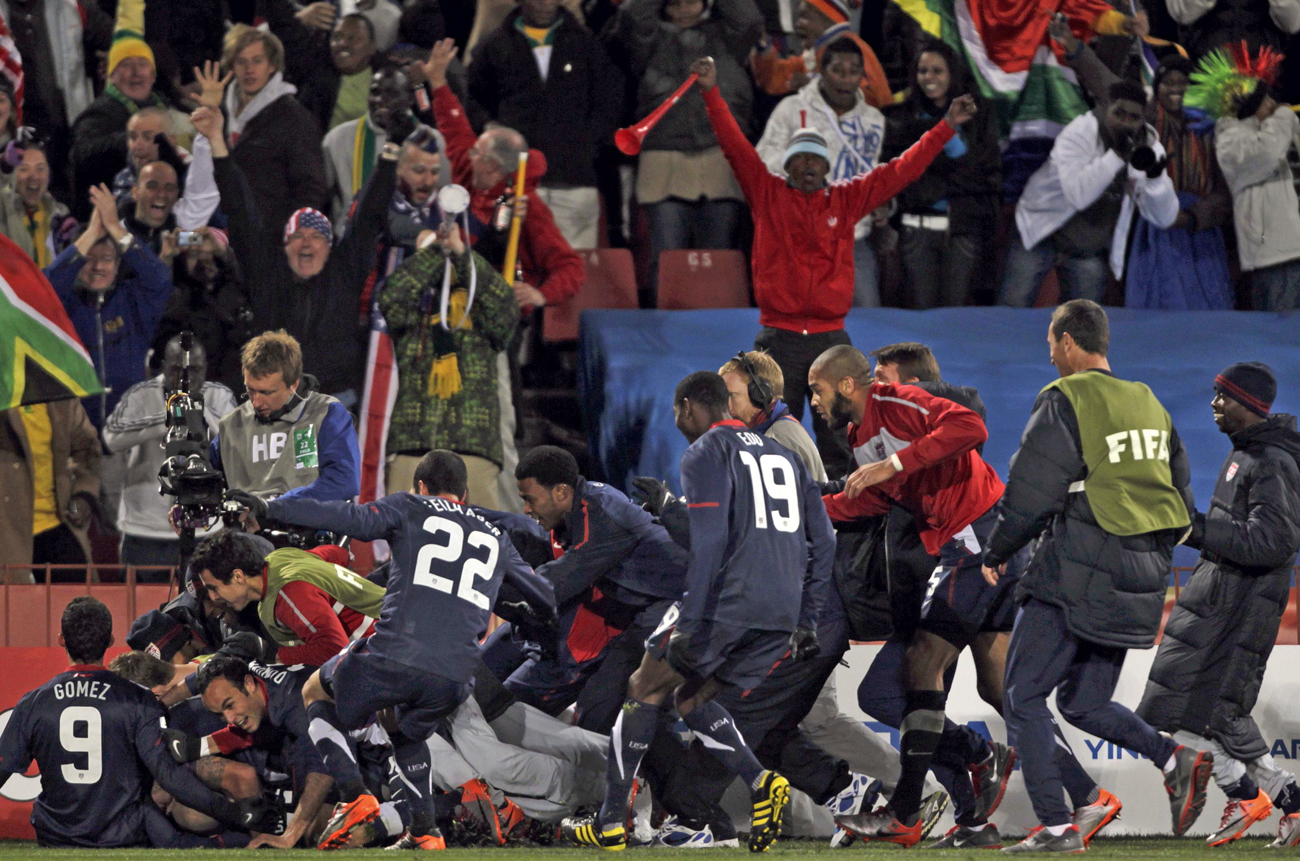 Johannesburg’s Ellis Park provided a theatre for the game of surprise and drama in which Slovenia dominated the first half and the US forced their way back in the second. Pity about the refereeing, though. It ended US 2, Slovenia 2.

For anyone who saw Slovenia’s win against Algeria as a fluke, the first half of the US game was a sobering reminder that no bad team from Europe can qualify for the World Cup. Although the US nominally had most of the initiative and attacking disposition, it was Slovenia who broke early and looked way more dangerous. Birsa scored a brilliant goal and Ljubijankic was the last in line of precise passes to slot the ball coolly past the advancing US keeper Tim Howard. Slovenia presented itself team that is well-organised and could be lethal on counterattacks. Its keeper, Handanovic was also a very safe pair of hands.

In the 41st minute, the US’s return into the game looked like a distant and not very real possibility. Enter the US’s Donovan, who more or less alone scored the brilliant first goal in the 48th minute, and engineered the second by none other than manager Bradley’s son, Michael Bradley (in the 82nd minute). Donovan also crossed a really good ball into the Slovenia’s box in the 85th minute, which was deftly buried into Handanovic’s goal by Edu, only to be disallowed by the Malian referee Koman Coulibaly for an infringement he, and only he, saw. No protests from the US side could help, of course. Phorto: Maurice Edu of the US (2nd R) takes a shot at a goal which was later disallowed during a 2010 World Cup Group C soccer match against Slovenia at Ellis Park stadium in Johannesburg June 18, 2010. REUTERS/Jerry Lampen

Both Slovenia and the US now face the third round with a reasonable chance of advancing into the next round. Of course, it all depends on how England and Algeria perform will tonight: the number of permutations is pretty high. What is certain, though, is that it would be much better if all the results and eventual successes were due to the teams’ merits and not the unsteady refereeing.

Here are this reporter’s notes.

The first 10 minutes pass without much fanfare, with both teams diagnosing each other’s readiness and commitment. Photo: Slovenia’s Zlatan Ljubijankic shoots to score past Tim Howard of the US during a 2010 World Cup Group C soccer match at Ellis Park stadium in Johannesburg June 18, 2010. REUTERS/Jerry Lampen

The US is now up against a hard, big wall. It will be tough for them to come back after such a shock. What’s more, the US players will have to attack even more emphatically, leaving huge gaps behind them. And we just saw what Slovenians can do when a gap opens up.

End of the first half. The US team is stunned. The Slovenians are 45 minutes away from going into the next round. Today is a day for upsets, it appears. The Slovenians mount a response to the US’s second half offensive, trying to calm the rhythm that brought the Americans within a sight of their lead. It is in great Slovenian interest to becalm the choppy green waters of Ellis Park now. The US has also slowed down a bit, only to provide Altidore with a chance that was defused by the swift response of Suler.

Reports from the stadium indicate that the stewards are running roughshod over the supporters. How irritating it must be!

The game settles into a typical tournament game, with every ball fought for and every pass interception attempted.

Will the US manage to claw its way back? They spend couple of minutes besieging Slovenia’s penalty box. Slovenian attacks are quickly defused. And yet, what is really missing are the proper opportunities. Yes, Bradley is the US manager’s son. Wanna be clever about nepotism now?

Three minutes of stoppage time. Both defences prefer to clear the ball as far away as they can. No time and no margin for error now. Pecnik is injured after colliding with Dempsey and get replaced by Kovac.