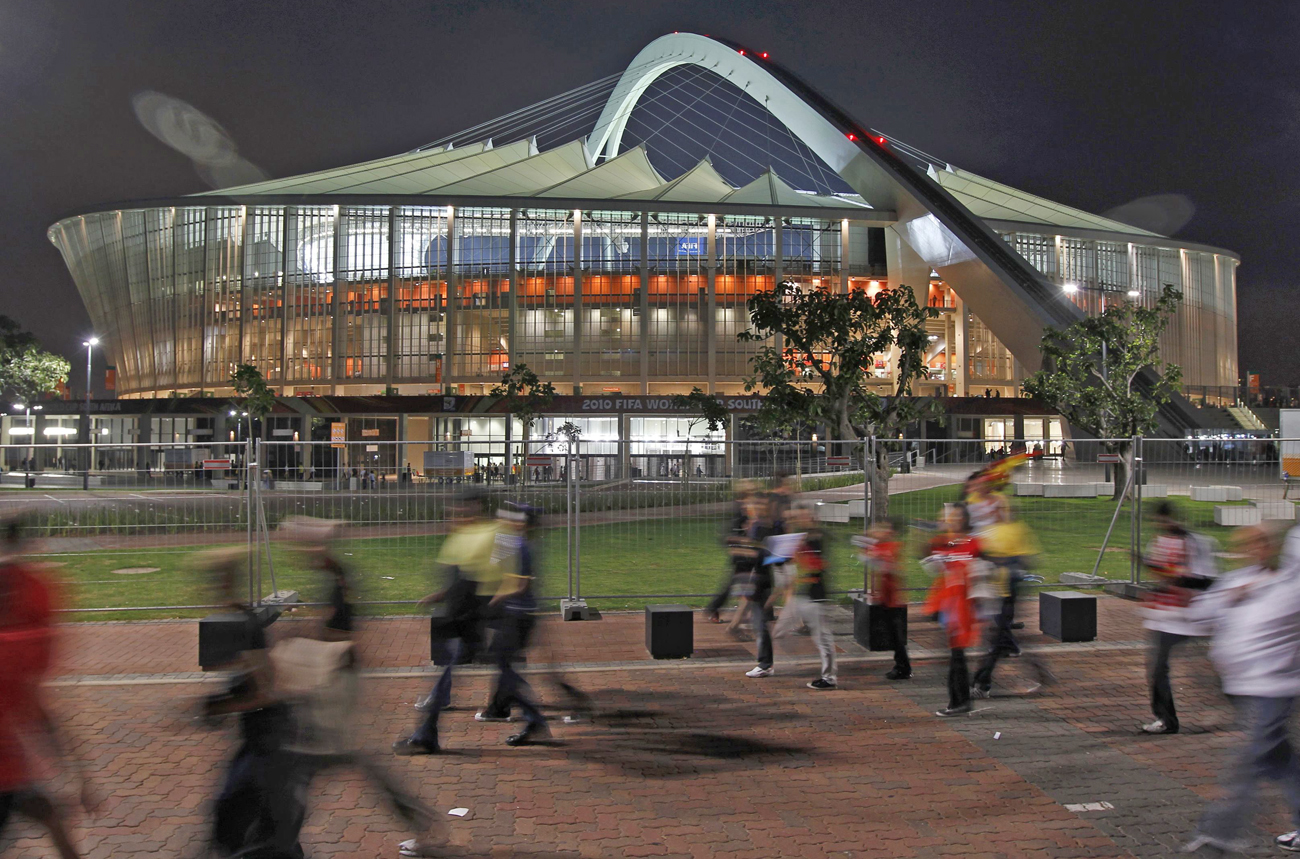 Craig Tanner’s documentary Fahrenheit 2010 interrogates the needless expenditure behind South Africa’s brand-new stadiums, and argues that the World Cup could have (and should have) been staged in the venues that were in existence when we won the bid. Do our own broadcasters care? Not really.

Four days into what’s easily the most inclusive sports metaphor on Earth – this football event into which a large chunk of humanity puts its energies, hopes and fears – and we can already say that South Africa has pulled it off. Never mind the matches running on time or the lack of serious incident, more important is that the country has taken the break from itself it so desperately needed. The class and race divisions that only two months ago were dominating our national psyche have been forgotten, and we’re now collectively telling ourselves (and the world) that there’s more keeping us together than has been keeping us apart. We’re having a fat jol, and we’re being loved and appreciated for it.

Unfortunately, in less than a month the world’s not going to care anymore about South Africa. Come July 12, we’ll have a debt as big as our hangover, and we’ll only have ourselves to get us through. It’s probably best, then, to pay attention to the insights of Craig Tanner, writer and director of the documentary Fahrenheit 2010. The truths Tanner uncovers are no less important for being truths we think we already know; the critical thing, for South Africa, is that Tanner gives these truths substance and form.

Less than ten minutes into his documentary, Tanner states his purpose: “This film does not question whether South Africa should host the World Cup. The opportunities the tournament offers to market the country and to invoke national pride are unquestionable. A central inquiry is why a developing country with extreme socio-economic challenges would choose, or be expected, to divert funds from investment in hospitals, housing and education to build huge sports arenas that will rival first world amenities – an initiative despite the existence of existing facilities in which the 1995 Rugby World Cup and Fifa’s 2009 Confederations Cup were staged.”

To reiterate, Fahrenheit 2010 interrogates the need for expenditure of tens of billions on new stadiums across South Africa when, firstly, the event could easily have been staged using the old stadiums and, secondly, the country’s limited resources should be urgently geared towards housing, healthcare and education facilities for the disenfranchised.

As one example amongst many, the film focuses on the Green Point stadium in Cape Town. It’s common knowledge by now that the ANC wanted the new stadium built in Athlone, where it would be of more immediate benefit to the city’s poorer communities, and that Fifa insisted on the Atlantic seaboard venue because of the better view. Slightly less well known is that Newlands, with a small addition of 6,000 seats, would’ve fulfilled Fifa’s requirement that semi-final venues have a minimum 70,000 capacity.

LOC boss Danny Jordaan is quoted in the film saying Newlands has a transport problem; that the roads are narrow and that traffic would have been impossible. But Noseweek editor Martin Welz comes back with the obvious: Newlands is built on a railway line and two main Cape Town thoroughfares. Also, states the film’s narrator, “Fifa declared the Confederations Cup, staged in South Africa in June 2009, to be a success. Every one of those matches was played in stadia that were in existence before South Africa won the bid to host the World Cup.”

In an interview with The Daily Maverick, Tanner said that the question of who exactly benefits from the construction of these new stadiums (incidentally, the Sunday Times ran an article recently in which it estimated the cost of five new stadiums – Cape Town, Durban, Nelspruit, Polokwane and Port Elizabeth – at R12.7 billion) is an “area that needs more thorough investigation.”

What he did offer, however, was the following: “The bid was won on the basis that existing stadiums were adequate subject to upgrades. And then at a specific moment the decision was made to build new stadiums. The key is to hone in on that moment.”

Later, Tanner sent The Daily Maverick a message expanding on his answer: “A point worth noting is that the people who decided to build the new stadiums or, for that matter, to ensure that South Africans do not see a film that poses questions about that expenditure, are not living in shacks. Their lives are not affected in any way by the diversion of public funds from service delivery to the building of state-of-the-art sports arenas.”

As for that line about the people who don’t want South Africans to see his film, Tanner reminded us that all three major broadcasters in the country rejected his overtures. ETV replied with the answer that “the film is not suitable for a South African audience,” MNet simply said they weren’t interested, and the SABC, although they did send a news crew over to produce a short interview piece, never ran the piece because “editorial were unhappy with the content”.

But beyond the country where it’s most important that the documentary be shown, the interest has been significant. Fahrenheit 2010 has so far been sold to broadcasters in Spain, Israel, Estonia, Brazil and Sweden, and is due for cinema release in Italy. Al Jazeera have also bought the film, and it’s about to be released on DVD in the United States.

Outsiders will therefore soon know a lot about a subject that impacts us way more than it does them.