Bafana Bafana draws the Mexico game, but makes us proud

Bafana Bafana draws the Mexico game, but makes us proud 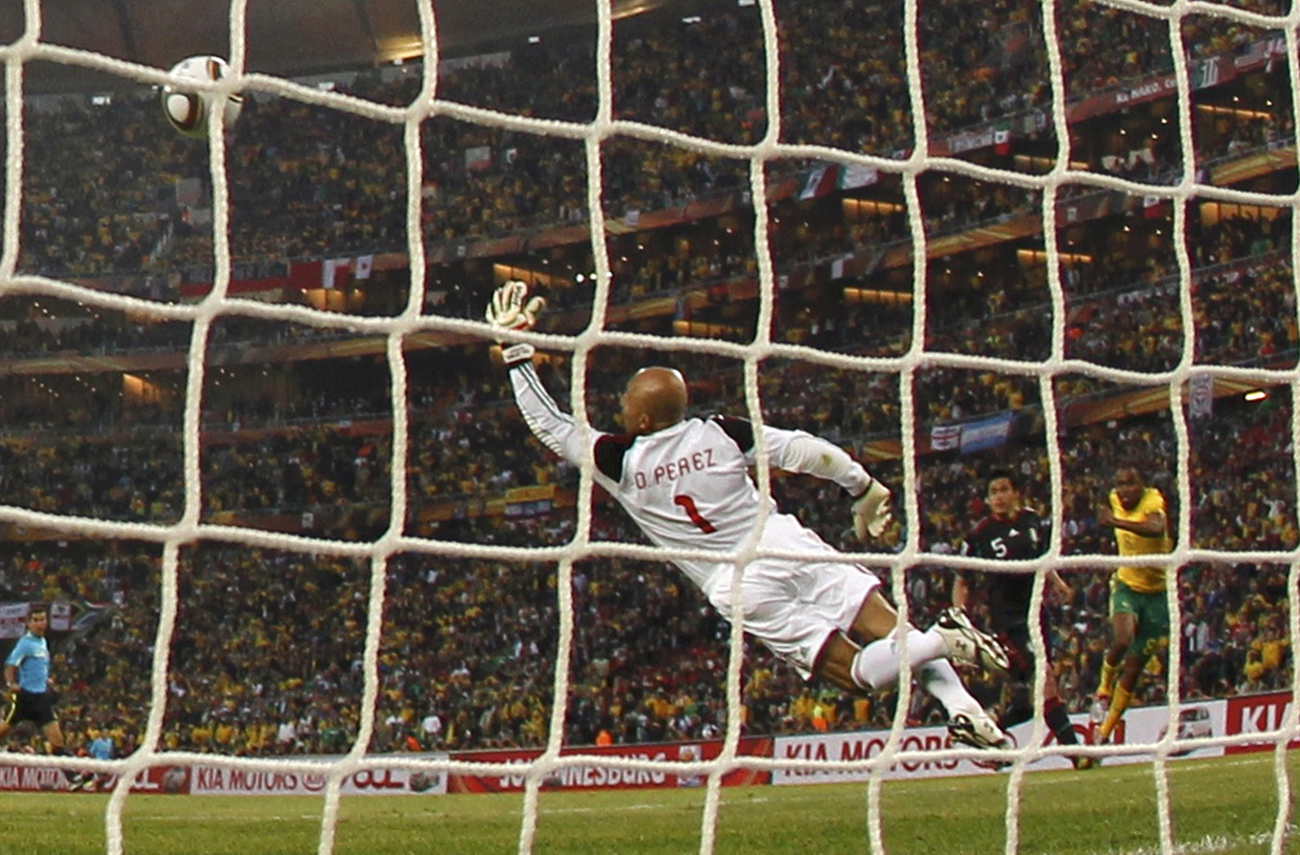 They fought a hard battle that at times looked entirely winnable. But Mexico was a tough opponent that managed to crawl its way back and live to fight another day. Just.

As the match against the refined Mexicans started, the whole of South Africa, including the 11 Bafana Bafana fighters on the pitch, suffered from jelly knees. Mexicans dominated the space and, at times, the immediate future looked rather bleak for SA’s 50 million supporters.

But as the fist half drew to a close, it become more and more obvious that Bafana’s uncertain play was more of a stage fright problem than lack of quality.

The second part properly exposed the gaps in the Mexican defence that this reporter noticed in the first half. Apart from being a moment of personal brilliance, Tshabalala’s goal was a product of well-executed strategy to punish the Mexicans lackadaisical approach towards defence.

The Mexican equaliser, however, was a worrying lapse in concentration that, no doubt, had Parreira pulling his hair out. It is obvious that the Bafana Bafana coaching team will spend more time focusing on the issues that were not easily imagined before the match – like how to defend and protect a brilliant lead in a World Cup game. What is incredibly encouraging, though, is that at the end of the game, and despite Mexico scoring the late goal, Bafana continued attacking and pushing for the winner. They are obviously well-prepared and in peak physical condition. The games that follow will be started with much less nervousness; they now know they can get out there and compete with the best.

All in all, Bafana Bafana did us all proud. It is good to be South African this cold June evening.

Here are this reporter’s minute by minute notes.

Presidents Jacob Zuma and Calderón were at hand to encourage their teams before the noisiest match start in the history of the game. SA coach Carlos Alberto Parreira chose to retain the team that started against the Danes almost a week before. Mexicans are giving SA audience run for their money.

The Mexicans start confidently. Their passes are precise; the South Africans’ interventions border on desperation. Itumeleng Khune is looking pretty good, though. Parreira looks anxious for Bafana Bafana to calm their initial nervousness and start playing their own game, Mexico permitting.

As the first 10 minutes pass, Mexico’s strategy becomes obvious. They spend most of their energy on closing down Bafana players, in an attempt to break their rhythm and concentration. But SA boys have managed to calm their nerves somewhat, with game settling in between the 16-metre boxes. In theory, the chess game should suit the seasoned professionals in their team more than the Bafana players who, in theory, energised by fans wanted to assert themselves sooner rather than later.

During Mexican sorties deep into SA territory, they do look rather dangerous. SA defence is still holding, though. Their defence is pushed away from the goalkeeper Perez, leaving plenty of empty space for Stephen Pienaar to engage Katlego Mphela’s quick feet.

19th minute: Giovani dos Santos’s confident effort in the counter-attack temporarily stops millions of SA hearts, but the ball, luckily and harmlessly, chooses the path away from Khune’s gates.

22nd minute: Plenty of space in Mexican defence. It does appear that Perez is not the safest pair of hands. Or is it just jitters?

27th minute: Kagiso Dikgacoi get SA’s first yellow card, handing the free kick in a promising spot for Mexico. The Jabulani ball, however, still appears to be a handful for both players and goalkeepers.

First 30 minutes over, Mexicans have the lions’ share of possession (62%), but Bafana are in the game, albeit still a bit nervous.

32nd minute: Argentine-born Guillermo Franco has his first proper chance instinctively stopped by Khune, whose game is instilling his defenders. 33rd minute: Carlos Vela wastes a perfectly good chance, succeeding in turning his opportunity from the right-hand side of the box into neither a shot nor a cross. Good, because Bafana’s defence looks exposed; allowing two chances to Mexico is not a good sign. Parreira is nervous, sending several players to warm-up, changes in SA defence distinct possibility, especially with creating the chance in 37th minute too.

38th minute: Mexican goal disallowed for offside, but the SA defence has been comprehensively beaten. The Mexicans didn’t complain too much and it does look as if they are certain of another goal coming soon. Bafana’s skin is saved by the offside law which says that TWO people have to be behind the striker. Khune’s effort to stop the cross left the lone Pienaar on the line. South Africa breathes again.

40th minute: It is all Mexico now. Franco fails to convert dos Santos’s cross, heading the ball just over the crossbar. It doesn’t look good for Bafana.

41st minute: SA corner provides much-needed respite for Khune and the rest of the defence. Oscar Perez fingers the ball, just, into another corner. It does look that he could be Mexico’s weak point, especially because of his height, or lack of it.

43rd minute: The first chance for Bafana, as Mphela was inches away from reaching Siphiwe Tshabalala’s cross and burying it into the net. Two corners in a row trouble Perez.

The first half ends and not a minute too soon for Bafana Bafana.

A note from our embedded reporter during half-time: The toilets are well stocked with condoms, though it is unclear how suitable the Soccer City is for having sex. It may be that the stadium and match officials are predicting Bafana’s victory?

The first half doesn’t bring much confidence to SA supporters. Mexican player clearly are playing a technically refined game that is on higher plain than Bafana’s and dos Santos and Franco are pretty much doing what they want. But the Mexican defence still leaves plenty of space for counter-attack and that looks like Bafana’s best way in.

The half starts almost sedately, with opponents sizing up each other again.

50th minute: Bafana Bafana look much more of an equal partner in the game, which is now pulsating on both sides. Mexican defence keeps leaving acres of space for Bafana to exploit.

54th minute: GOAL!!! Siphiwe Tshabalala scores for Bafana! A prefect counter-attack and the perfect finish that you will not see often on ANY scene, ever. The situation now changes materially. Mexico will now be forced to get out even more, leaving even more space for Bafana counter-attack. And Bafana will now finally overcome the jelly knees that plagued them for most of the first half. It is turning into a great game. 59th minute: Khune brilliantly stops dos Santos’s great shot from the right-hand side of the box. Great for his confidence. Resulting corner was defused harmlessly by the Bafana defence.

61st minute: Bafana grows in confidence and will try playing counter-attacks for the remainder of the game.

65th minute: Teko Modise misses an almost perfect chance that would almost certainly bury the Mexicans. His pained face says it all.

Tshabalala is growing in confidence. Bafana are enjoying the possession that eluded them in the first half of the game.

20 minutes for Bafana to survive. The SA defence’s confidence grew very much in the first part of the second half. Apart from dos Santos’s shot, not much penetration from Mexico, in stark contrast to the previous period. Mexican crosses fly wide and shots go high. Pressure shows.

78th minute: Rafael Marquez scores for Mexico! SA defence, inexplicably leaves three players on their own and there was no goalkeeper in the world who would’ve saved it. 79th minute: Siboniso Gaxa’s shot troubles Perez somewhat. Bafana are showing that they will fight to the end.

87th minute: Mexico makes a promising attack, but Hernandez heads it over the crossbar. Phew!