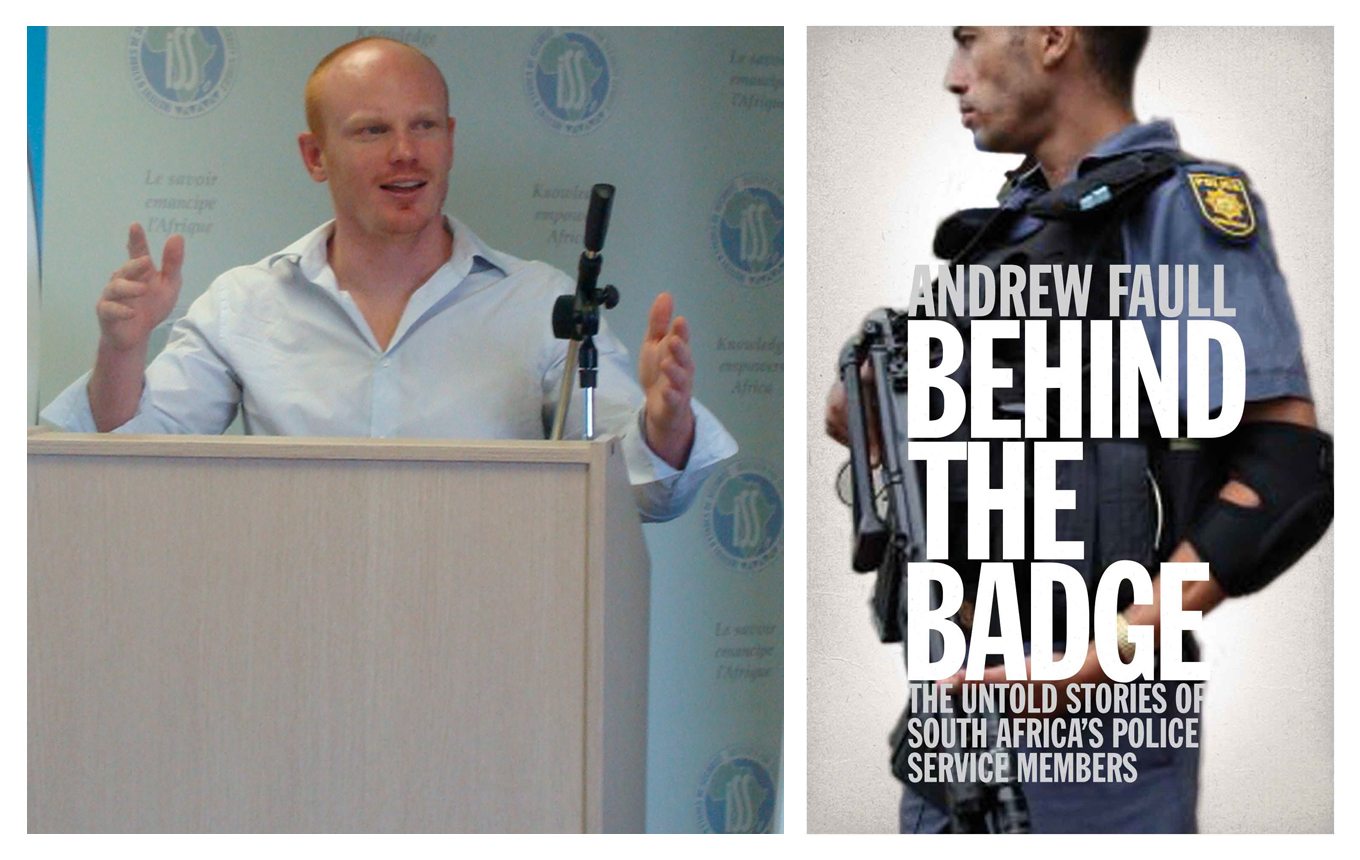 Small wonder the people who work, live and die in the South African Police Force (formerly the South African Police Service) are often little more than caricatures that inhabit our popular culture. They are the punchline of jokes, news headlines that tell of another cop shot on the job, or the statistics that indicate abnormally high police suicide rates.

There’s an unspoken rule that if you are a member of the police you don’t speak out – “what happens on the shift, stays on the shift”. Because of this “conspiracy of silence” members of the SAPF have largely been reduced to a clichéd abstraction by those of us who don’t have blue-badge friends or family.

Of late South Africans have had a rare glimpse into the closed world of local policing thanks to books like Jonny Steinberg’s Thin Blue and Andrew Brown’s Street Blues, but until now there’s never been a frank, first-person introspective.

Behind the Badge by Andrew Faull changes all that by exposing the interior landscapes of those who “protect and serve”. A series of conversations with current and former police members, the book offers candid insights on crime, corruption, trauma, racism, sexism, fear, torture, sex, power, corruption and humour on the force.

“I did a deal and caught a guy from Vryheid. He was a truck driver and I met him at the Ultra City. He took out the dagga there at the Ultra City. I said to him, ‘No, Man, you can’t take it out here; maybe there are policemen around here!’ He said to me, ‘Hey, I smell a boer seven miles away!’” – Captain de Beer

The aim of the book is to show how unique and disparate the people who work in the police are. Featuring 28 people who are as diverse as they are disconnected, what’s striking about the perspectives is how different they are.

“All these people work for the same organisation, but they have hugely different histories and completely different memories. Their concept of how things were in the past and how things should be in the future are all quite different. The excerpts exhibit clearly competing discourses which show the SAPS as a disjointed organisation that is still very turbulent and needs to settle,” says Faull.

While Faull compiled the book for a larger public, he’s hoping it will be read by people of influence in the SAPF. “I hope the police, without getting defensive about it, would recognise the challenges the people within their own organisation are facing and address the culture of the organisation.”

“I wanted to give the police a voice without an outside lens, so it is definitely a first of its kind,” says Andrew Faull, who adds, “I wanted to put the problems that exist within the organisation into the public domain on a more accessible level so that perhaps the police themselves will be spurred into action because they are a little bit embarrassed about police speaking about their own organisation and making confessions about torture, corruption and racism.”

“I knew about my colleagues’ involvement in corruption. They would just take favours in return for not proceeding with the charges. People give out money so that their guilt can be overlooked. It’s common. If you see someone doing that, you can’t stop him.” – Inspector Kekane.

As Faull says in the opening to his book, all South Africans have something to say about the police and most of these views are uncomplimentary. On the other side of the spectrum there’s the official SAPF version of the police, which is sanitised, peripheral and institutional.

“We tend to homogenise the police. I wanted readers to realise that the SAPS is a complex organisation with a complex history. Despite this, there’s the expectation that the police fulfil an impossible mandate and prevent crime. That they do so as a force that is filled with people who were once the strong arm of the apartheid, who were APLA members and freedom fighters, who were the product of combining 10 homeland agencies.”

The contrast in the interviews is striking, but so too the common humanity of people facing fear, trauma and horror.

“In this job you can’t think of death and still expect to perform. If you think of those things you can hardly do anything. That doesn’t mean you don’t get scared. You get scared, but you must deal with it.” – Inspector Lukhele.

“We went to a house where they had stabbed a 70-year-old woman, an old lady. They had stabbed her body. She had about 27 stab wounds. When we arrived, she was still alive. When she breathed, all these holes were puffing blood. It was horrible. Very sad. It makes you feel afraid and scared. That day I won’t forget.” – Inspector Dlamini.

Read The Sowetan story on Behind the Badge.