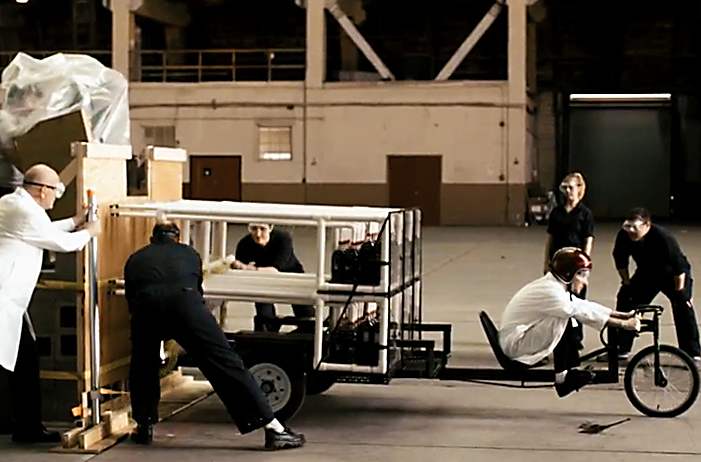 Shopping list: 108 2-litre bottles of Coke Zero, 638 Mentos. Just add two mad scientists and you have (most of) the ingredients you need to propel a rocket car.

We don’t know which genius first discovered the Diet Coke and Mentos geyser effect. What we do know is that it made science cool to a whole new generation. If you somehow haven’t seen one of the many Diet Coke and Mentos videos on YouTube, a geyser effect occurs when you drop a Mentos sweet into a Diet Coke bottle. And, unlike some of the crazier videos on the Internet, it’s perfectly safe to try this at home (although probably not in the vicinity of your mom’s Persian carpet).

The first televised demonstration of the effect was by physics teacher Lee Marek, in an appearance on the David Letterman Show in 1999. But it was Fritz Grobe and Stephen Voltz who turned the “Coke geyser” into an Internet phenomenon in 2006 with a video called The Extreme Diet Coke & Mentos Experiments. The pair, who are the co-founders of Buckfield, Maine-based entertainment company Eepybird,  spent six months developing different Coke and Mentos geyser effects, before putting together a spectacular dancing Coke fountain video.

The scientific principle behind the effect is called nucleation, and it’s a physical (rather than chemical) reaction. As the Coke and Mentos guys explain on their website: “All the carbon dioxide in the soda – all that fizz – is squeezed into the liquid and looking for a way out. It’s drawn to any tiny bumps it can grab onto. Those tiny bumps are called nucleation sites: places the gas can grab onto and start forming bubbles…

The surface of a Mentos is sprayed with over 40 microscopic layers of liquid sugar. That makes it not only sweet, but also covered with lots and lots of nucleation sites… Since the Mentos are also heavy enough to sink, they react with the soda all the way to the bottom. The escaping bubbles quickly turn into a raging foam, and the pressure builds dramatically. All that pressure has got to go somewhere, and before you know it, you’ve got a big geyser happening!”

The experiment has been profiled on “MythBusters”, where Adam Savage and Jamie Hyneman delved deeper into the hows and whys of the effect, eventually concluding that, “The ingredients seem to have a perfect compatibility with each other and, when mixed together and added to the nucleation, create a chemical reaction that forces the soda to release all of its dissolved carbon dioxide at once, thus causing a more violent eruption than carbonated water alone.” If this stuff really excites you, Tonya Coffey of Appalachian State University has published a paper on the reaction.

For Grobe and Voltz, it’s less about testing theories and hypotheses and more about having fun. The pair’s latest scientific stunt was using the Coke and Mentos effect (plus a simple piston mechanism) to propel a “rocket car” – or, if you’re being technically correct, a “rocket bicycle and trailer” – a distance of 221 feet.

On Monday they posted a video on YouTube documenting this feat, Experiment #321: Human Propulsion, and it’s already gathered more than a hundred-thousand views. You can even check out a 3-D version. If you don’t have any 3-D glasses lying around, no worries, the guys have also created a video about how to make your own.

The tagline of the Eepybird website is, “Entertainment for the Curious Mind”, and the company’s philosophy is to explore “the ways in which ordinary objects can do extraordinary things”. We’ll join Grobe and Voltz in a Coke Zero toast to that.