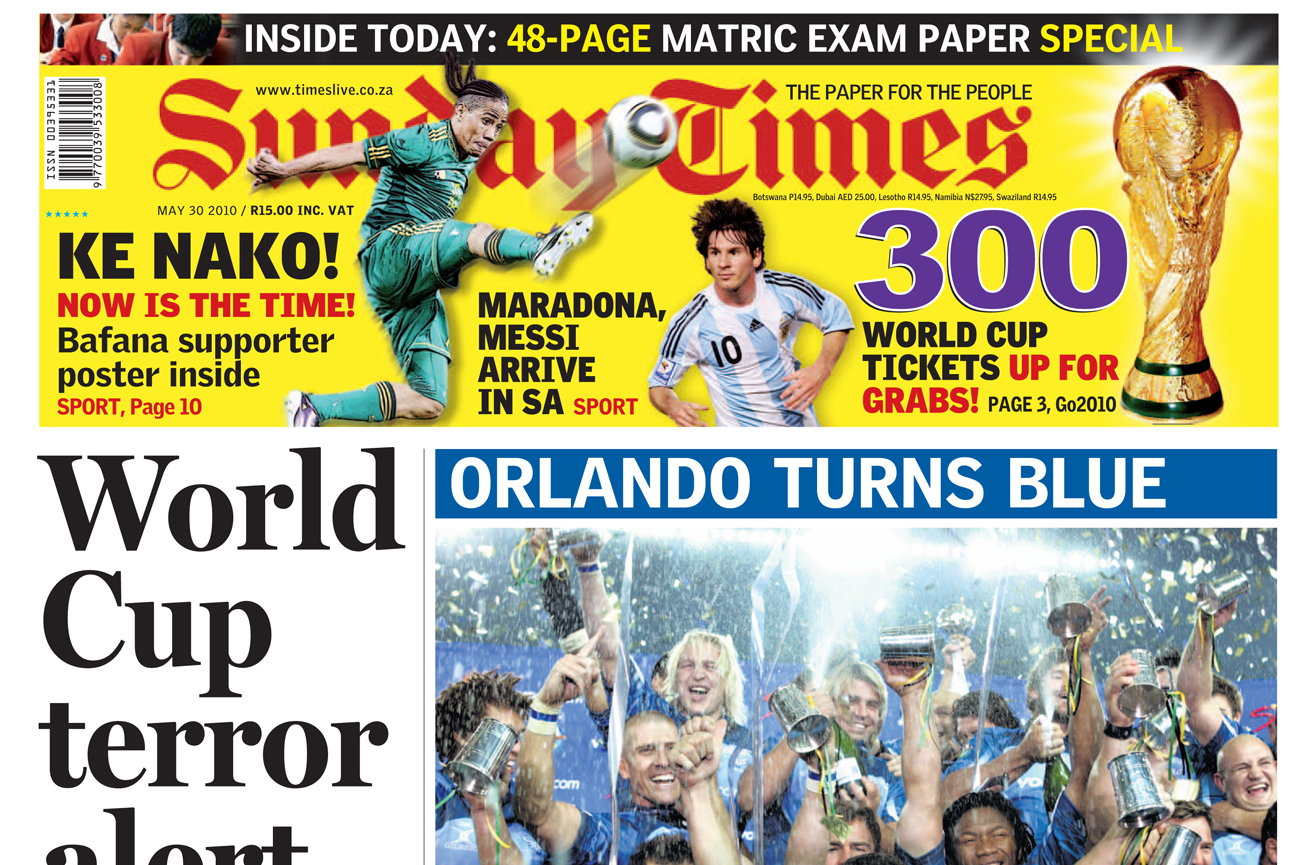 It may not entirely be South Africa’s “paper of record,” our equivalent of the New York Times, but it’s close enough. On May 30, with less than two weeks to go before kick-off, the Sunday Times crammed itself full of revealing World Cup stories – and in doing so took the temperature of a planet.

If any of us still foolishly thought that the 2010 Fifa World Cup was just a soccer competition, a sports event that didn’t mean much in a larger context, a piece of staged theatre that could be compartmentalised or ignored, the Sunday Times of May 30 has come, once and for all, to disabuse us of that notion. The newspaper, which despite some recent setbacks remains the most influential in South Africa – and arguably the most influential on the continent – has “flooded the zone” with its latest issue, and by doing so has reminded us of the vast range of human concerns reflected in (and by) the tournament. The World Cup, the newspaper has effectively said, is currently the largest event organised by human beings for human beings, it’s how the species explains itself to itself, it’s the most effective temperature gauge we’ve got for our global condition circa 2010.

Item number one: human beings, unfortunately, are as divided as they ever were. “World Cup terror alert” reads the newspaper’s front-page headline, and it doesn’t have (nor need) an exclamation mark, because there’s nothing about this that’s particularly surprising. The United States Congress, it turns out, has been warned that Somali and Pakistani militants are running training camps in northern Mozambique; that some of these trainees may have entered South Africa to join or form cells planning World Cup attacks; and that there appears to be an al-Qaeda link.

“The existence of operational militant training camps in several provinces in South Africa, and of established terror strike cells planning to target the World Cup, was confirmed independently by three sources with direct or indirect access to active intelligence operations,” the report noted. “Two sources separately confirmed the Mozambique camps and presence of both al-Qaeda and al-Shabaab operatives.”

In the body of the paper, the Sunday Times picks up on the other enduring preoccupation of homo sapiens (the first being killing one another) since the beginning of recorded time: sex. “On the eve of the World Cup,” writes journalist Buyekezwa Makwabe, “pretty young faces selling their bodies are sprouting like mushrooms around the city, and sex workers around the country are hoping to rake in foreign currency from tourists.” The piece focuses with empathy on the plight of a Capetonian sex worker named Skye, who joined the world’s oldest profession so she could feed a family of eight. There is a suggestion at the end of the article that some of the new “ladies” (their ages range from 18 to 30) will leave the sector after the World Cup.

It’s not quite as ancient a drive as war and procreation, but the profit-motive, the in-built compulsion to own stuff, is pretty old nonetheless. Here the Sunday Times borrows the narrative of one Emil Keyser, a man who spent R40-million on developing a 50-room hotel to host the German team, only to find that unless he complies with a stringent set of building regulations by May 31, the court may order the Germans to go elsewhere. Appropriately, there is in this piece a subtle undertone of schadenfreude, the German term for the pleasure that can be derived from the misfortune of others, which is an instinct about as old as the profit-motive itself.

What about the instinct to be applauded, to be celebrated for your uniqueness and all-round worthiness on the planet? That’s in the latest Sunday Times too, in the article “Chaos adds spice to SA soccer fever”. The subtext here is that South Africans are late starters, that they are slightly recalcitrant and not a little bit crazy, but that ultimately they are devoted and animated and, well, loveable. Get this for a great paragraph: “In a sign of the soccer fever gripping the country, cabinet ministers will play an exhibition game on the lawns in front of the Union Buildings in Pretoria on Friday. President Jacob Zuma is due to captain one side, and Deputy President Kgalema Motlanthe will lead the opposition. The World Cup trophy is to be presented to Zuma after the match – win or lose.”

Brilliant. There are more articles of a less momentous nature, such as the one about the “hunk” footballers who’ll be dazzling with “more than their ball skills” (sex category), or the one about the Sunday Times’s generosity in giving away 62 free tickets (shameless self-promotion category). There is also a tragically typical South African story about a shootout between Cape Flats gangsters at a primary school soccer match.

Again, taken together, all these Sunday Times stories coalesce around one core theme: with a soccer tournament inviting the world to gaze into a South African mirror, what’s being reflected back is an image that covers the gamut of contemporary human experience.