Review: The Boys in the Photograph

Review: The Boys in the Photograph 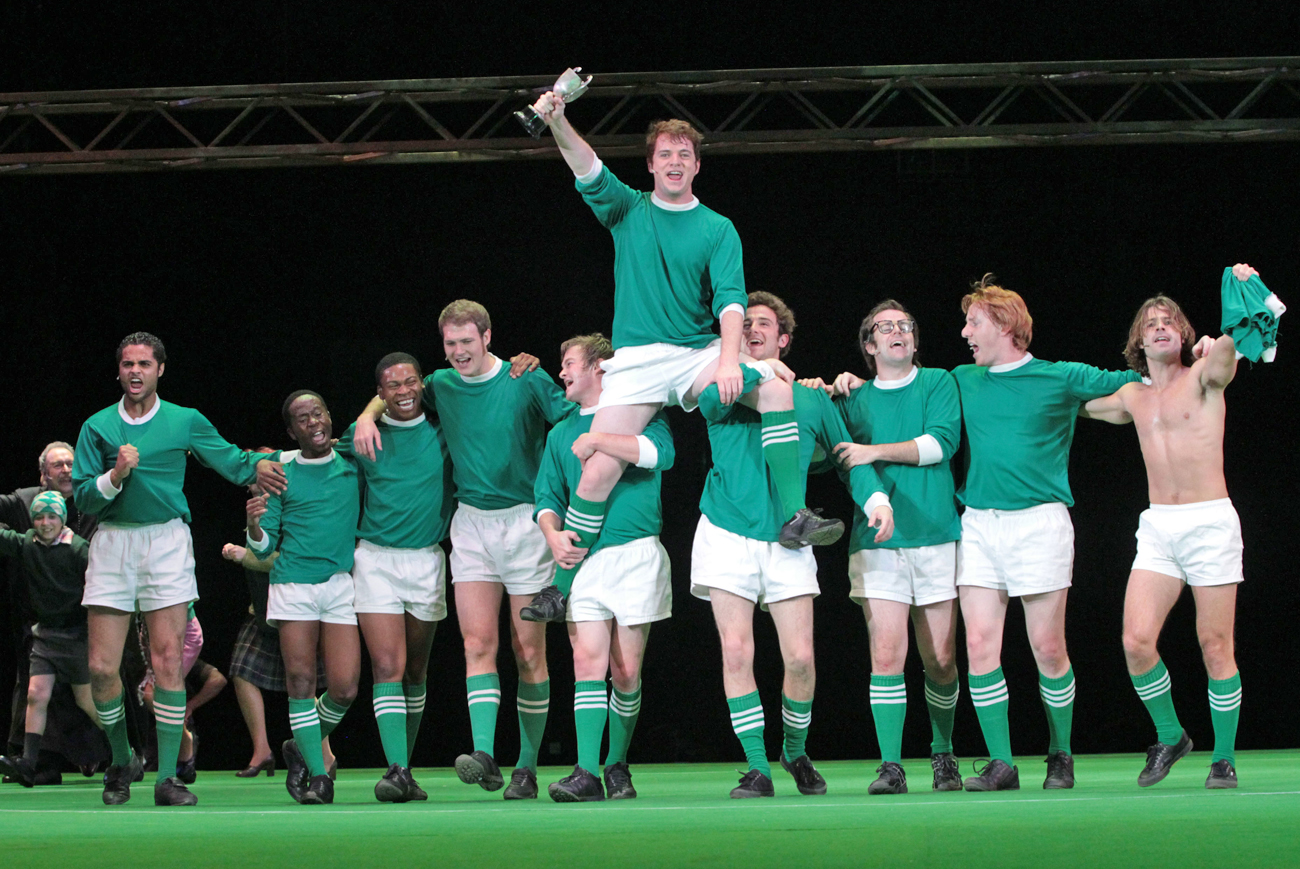 When stage sets for a musical get more rapturous applause than the cast itself, it can mean one of two things. Either the sets are astonishingly good or the cast is astonishingly bad.

For “The Boys in the Photograph” the scenery is simply the most elaborate and inventive I’ve ever seen. There’s a double-decker contraption where a street scene suddenly rises up and an entire changing room appears below, a revolving football pitch, a scarily real street-riot scene and a full Irish pub where you could probably be pulled a real pint of Guinness to take the edge off your amazement.

The cast is incredibly good too, but those fantastic sets by local designer Johan Engels do upstage them.

Created by Andrew Lloyd Webber and comedian Ben Elton, this musical isn’t a show as much as an event. The songs range from stirring to poignant, the script is witty and insightful and the all-local cast has been coached to perfection in their Irish accents. Director Janice Honeyman has coaxed the cast into some brilliant performances and makes full use of those marvellous sets. The costumes are periodic gems and the choreography by Celeste Botha is so good that a fight, a football match and a party are presented with rich intensity.

Chief among the admirable cast are David Chevers and Carly Graeme as handsome John Kelly and haughty girlfriend Mary Maquire, Adam du Plessis as an IRA thug, and Neville Thomas as whisky-swilling,  football-loving Father O’Donnel. A 10-piece orchestra adds to the extravaganza, although its exuberance needs to be checked to prevent it from drowning out some of the lyrics.

The musical was written to capture the events and emotions behind the Irish civil war. It focuses on a particularly violent period around 1969 when the IRA was biting deeper and ordinary Catholics and Protestants could no longer rub along together in relative peace. That’s not the stuff of a joyous, uplifting musical, yet Elton has woven wit through the plot and in the lyrics to his consistently powerful songs. There’s only one drawback, and it’s presumably what has kept the musical off the world’s stages since its original year-long London run in 2001. It’s a show with extremely limited appeal. English and Irish audiences may not want to sit through almost three hours raking over such a recent war.

It’s probably not insulting to say Americans and Australians wouldn’t give a toss about the troubles of a far-off land. So it’s come to South Africa too, where audiences are not going to get what they expect. Originally called “The Beautiful Game”, the musical is being advertised as a peripheral activity around the World Cup, with posters showing diving footballers rather than gun-toting soldiers.

That’s not wrong since the story follows the fortunes of schoolboys who meet in a local football team. But anyone who expects a rousing sporty evening is in for a political history lesson instead.

The show itself is incredibly good. It spans prejudice and morality, friendship to one versus kinship to all, the brutality of jail and the corruption of those who think they’re fighting a holy war. Strangely, Elton has rewritten the script to give us a last-minute happy ending, which seems as unrealistic as expecting Bafafa Bafana to win the World Cup.

This R10.6 million production is a fabulous piece of theatre, but leave your vuvuzela for the real games in the stadiums.

For more of Lesley’s stories, visit her brilliant website.

“The Boys in the Photograph” runs at Joburg Theatre until July 11th.