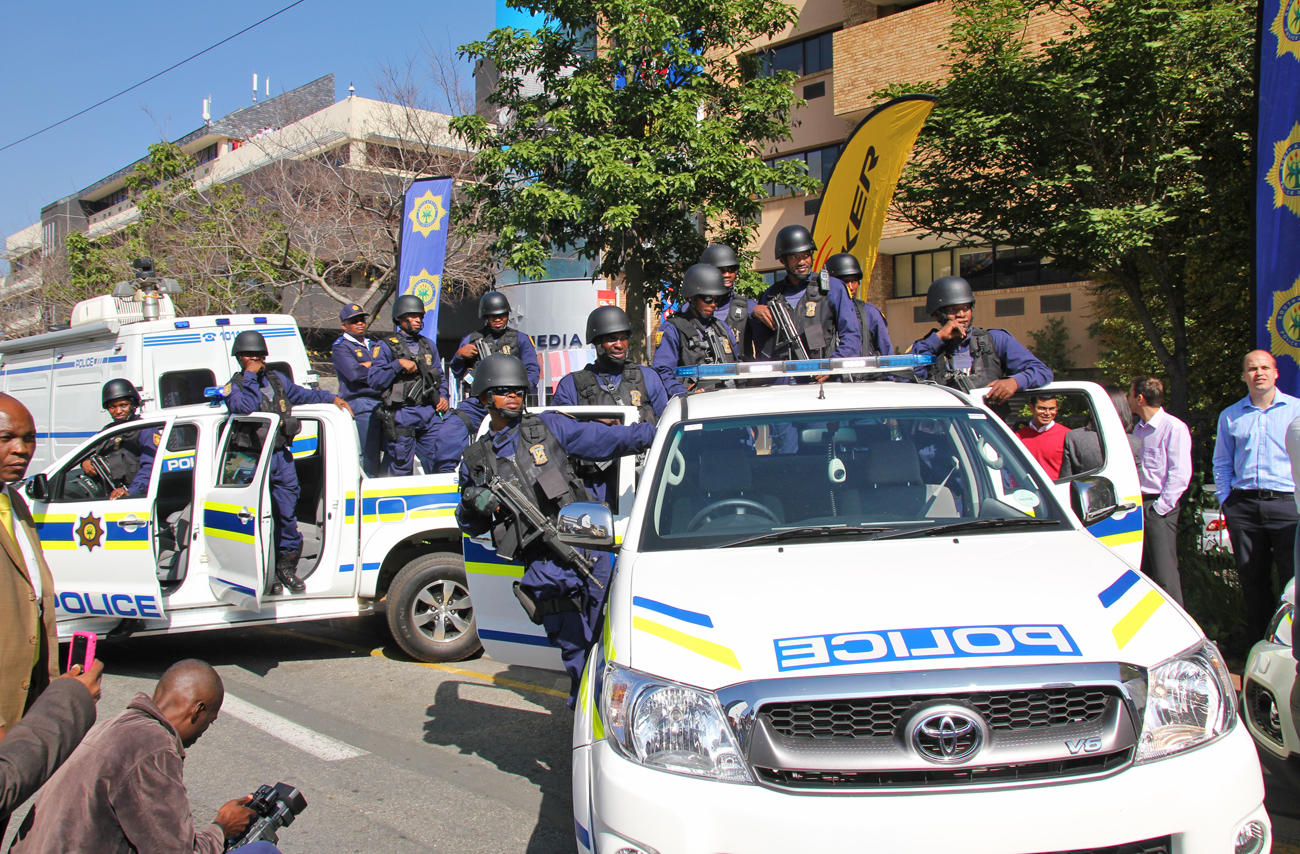 You'll have to excuse us if this report is a little short of substance. That's simply an accurate reflection of what happened in Sandton on Monday morning: lots of flashing lights and prettily coloured smoke to show that the police are ready for the World Cup, and awfully little detail.

This being South Africa, there were a couple of cynical questions going around the crowd. Questions like: where the hell did all of these cops suddenly come from? And: if all of them are here, who is out catching the criminals? It’s not often that you see several hundred police vehicles in one place, complete with air support, body armour, big guns (and little guns) and everything else that makes for an impressive display of force. Photo: Though he was not present in person, the grim spectre of Sepp Blatter was beamed in thanks to modern technology.

There was no particular point to Monday’s exercise in the Sandton central business district, except perhaps to be maximally photogenic for visiting foreign media who need something World-Cup-related to photograph. The exercise was combined with third birthday celebrations for CrimeLine, the anonymous SMS interface set up by Primedia (and championed by its radio stations) that feed tip-offs through to the police. But even that came down to a recounting of previously publicised successes. Still, the politicians had better get used to this kind of outing, because there’ll be plenty more to come. Police commissioner Bheki Cele and his boss, police minister Nathi Mthethwa had to make lots of speeches utterly devoid of substance but strong on style, and smile a lot. Also hanging around were a gaggle of artists associated with the Shout project , which seeks to eradicate crime by singing in harmony, B-list politicians like Gauteng premier Nomvula Mokonyane, and various people associated with soccer in one way or the other. None of them got speaking parts.

The only know casualty on the day, aside from office workers who may have been asleep at their desks when the flash-bangs went off, was Dino Lloyd, who is associated with Shout. He was just a second to slow in ducking a low-hanging branch while riding around on an open-top bus. Thirty minutes after being downed with a profusely bleeding head wound, Lloyd was regaling passers-by with stories about how hard his head is. Which may be a good metaphor for what is about to hit South Africa, but we haven’t figured out just how to make it fit yet.

Photos and video: The Daily Maverick Photo: Perhaps the most under-appreciated of the displays: a precision parachute landing in a corridor between high-rise buildings and a gap in the crowd less than 20 meters across.