12 May: Pope makes most telling sex abuse statement yet

12 May: Pope makes most telling sex abuse statement yet 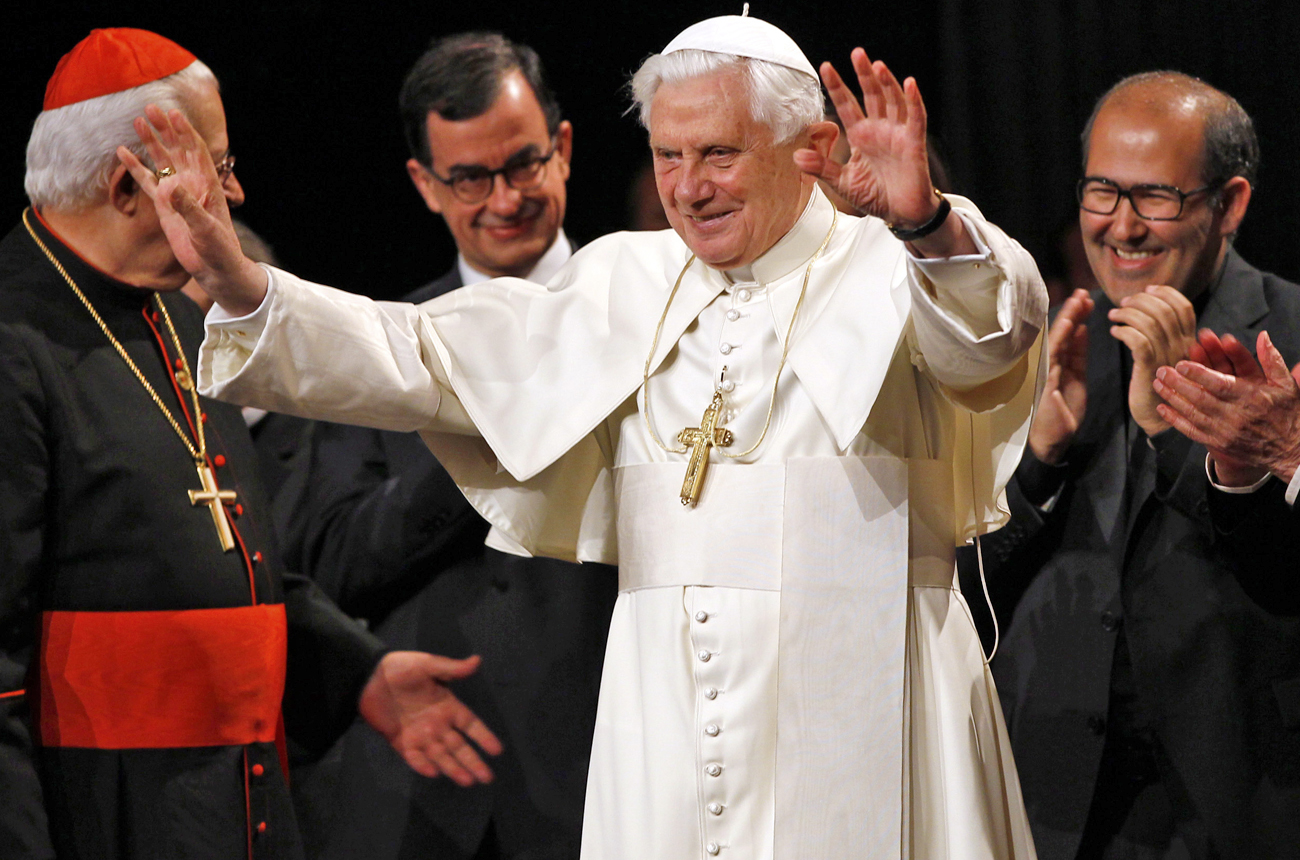 Also today: Cameron moves into No. 10; Congress castigates companies as they blame each other over Gulf of Mexico oil spill; Prophet Mohammed cartoonist says he was assaulted; Americans, Afghans agree to disagree.

Pope Benedict XVI told journalists that the guilt in the clerical sexual abuse scandal derived from sins within the Catholic Church and not from a campaign by outsiders. That’s the closest the pontiff has come to acknowledging responsibility for the litany of sex abuse claims against Catholic priests from all over the world. But victims’ support groups were not letting Benedict off that easily, saying that while he had scolded the church and accepted some bishops’ resignations, no one has been punished or defrocked for directly molesting children. The pontiff said: “The church needs to profoundly relearn penitence, accept purification, learn forgiveness, but also justice. Forgiveness cannot substitute justice.” Benedict was on his way to Portugal for a four-day visit when he made the comments. The Vatican had earlier said the Church was the victim of a media campaign and abortion rights and pro-gay marriage groups, despite promising to protect children and make abusive priests face justice.

Photo: Pope Benedict XVI acknowledges applause next to Portuguese film director Manuel de Oliveira (R) during a visit to the Belem cultural centre in Lisbon May 12, 2010. Pope Benedict said on Tuesday that the greatest threat to Catholicism came from “sin within the Church”, one if his most forthright comments so far on a sexual abuse scandal that has created turmoil in the church. The Church has “a very deep need” to recognise that it must do penitence for its sins and “accept purification”, he said. REUTERS/Stefano Rellandini

Cameron moves into No. 10

Conservative Party leader David Cameron is Britain’s new Prime Minister following the resignation of Labour’s Gordon Brown. The announcement came as Liberal Democrat leader Nick Clegg was installed as deputy prime minister after days of hard bargaining with his former political rivals. The prospect of a hung parliament forced the Tories to include four other Lib Dems in Cabinet, ending the election saga that returns the Tories to government after 13 years of Labour Party rule. Many Conservatives think this dilutes their party-political agenda, so it may not be a happy marriage of convenience. At 43 years of age, Cameron becomes the youngest prime minister in almost 200 years. Cameron and Clegg agreed to unite after the Conservatives won the most seats in Parliament in the 6 May election, but fell short of winning a majority, making this the first full coalition government in Britain since World War II. Both Cameron and Clegg indicated they favour looser ties to Washington than those held by Brown and his predecessor, Tony Blair. That’s sure to raise questions over Britain’s role in Afghanistan.

The US Congress has called oil major BP and its drilling partners, Transocean and Halliburton, to account for the catastrophic Gulf of Mexico spill, querying the chain of events that led to a deep-sea wellhead exploding and threatening marine environments all along the southern coast of the US. Both Democrat and Republican Senators grilled executives of the three companies who spent their time trying to shift the blame to each other. Lamar McKay, chairman of BP America, said his company’s only obligation was to clean-up the spill, and that ultimately blame for the rig’s failure lay with Transocean and Halliburton. Lawmakers compared the magnitude of the spill with other great man-made disasters, including the sinking of the Titanic, the Three Mile Island nuclear accident, and the loss of the space shuttle Challenger, saying they’d likely discover a cascading series of technical and regulatory errors.

Lars Vilks, a Swedish cartoonist who depicted the Prophet Mohammed as a dog, appeared to be head-butted by a man who jumped from the front row of a lecture theatre at Uppsala University, breaking Vilks’ glasses, as furious protesters interrupted his talk about the limits of free speech. Police later said the attacker didn’t reach Vilks and the so-called head-butt may have come as he was evacuated from the hall by plainclothes officers. A video clip of the incident showed the cops using pepper spray and batons on an angry crowd shouting “God is great” in Arabic after Vilks was whisked away. Earlier this year, US investigators said Vilks was targeted in an alleged murder plot involving Colleen LaRose, an American woman who dubbed herself “Jihad Jane”, and who is now on trial. Vilks insists that he was head-butted by a man from the audience and that his glasses were broken.

US secretary of state Hillary Clinton has assured Afghan President Hamid Karzai that Americans will remain engaged in his country’s security and reconstruction long after the last US combat troops have departed the eight-year conflict. She said the US wouldn’t abandon the Afghan people, despite the sharp differences between the parties that have complicated efforts to stabilise the war-torn country. Karzai thanked the US for helping oust the Taliban regime in late 2001, but said international forces must do more to avoid civilian casualties. That’s caused rifts between the Americans and the Afghan government, but the major cause of friction has been that Karzai was re-elected as president last year in polls widely seen as fraudulent.