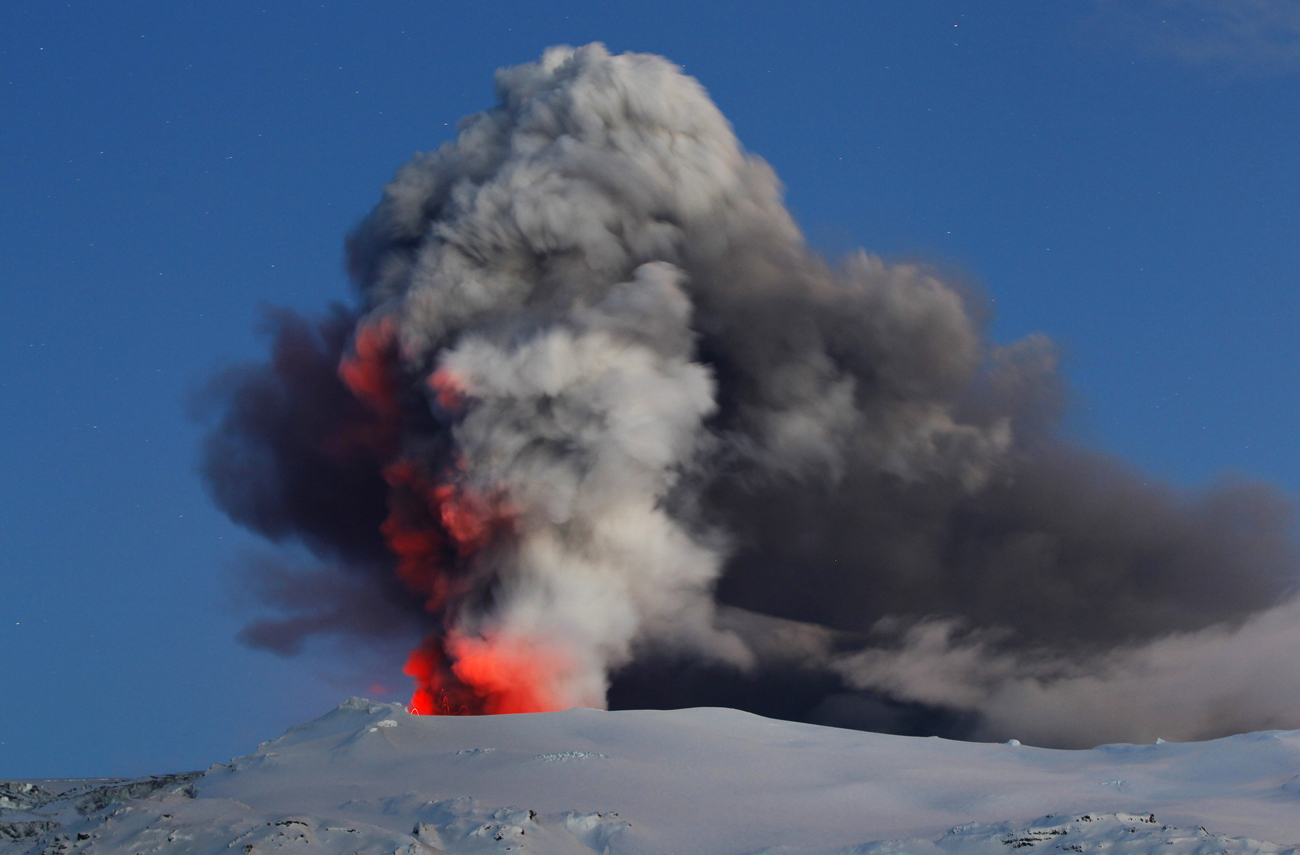 Ash continues to spew from Iceland’s Eyjafjallajokull volcano, cancelling hundreds of flights across Europe as a 3,400km x 2,200km cloud of gritty ash stretching from Greenland to Portugal caused aviation authorities to shut down trans-Atlantic air traffic. Five of Ireland’s westernmost airports closed on Sunday, although the country’s three biggest airports in Dublin, Shannon and Cork stayed open. But as airlines diverted traffic north and south of the cloud, some connections were halted entirely as an offshoot of the main mass passed over Spain, southern France, northern Italy, Germany, the Czech Republic and Austria. European air traffic authorities fear the volcano’s abrasive ash could harm jet engines, further raising the cost to airlines. But there were still some 24,500 flights within Europe on Sunday, or about 500 flights below the average for this time of year, meaning that most of the closed airports were likely to reopen soon.

Photo: Lava and ash explode out of the caldera of Iceland’s Eyjafjallajokull volcano April 22, 2010. REUTERS/Lucas Jackson

Gulf of Mexico rig gushes out of control

Efforts to contain the Gulf of Mexico oil gusher are not working out, after icy crystals of methane clogged the nearly 100-ton steel-and-concrete box meant to cap the leak. The crystals made the lid more buoyant, and also stopped oil from rushing up a pipeline from a depth of 1,500m into tankers on the surface. Some 800,000 litres of crude are daily pouring into waters 80km off the coast of Louisiana, but the toxic slick is now seen to be washing up on beaches as far away as Alabama, and threatens the environment in Mississippi and along the Florida panhandle. Officials now hope to deploy a smaller containment box that’s less likely to get clogged, but this would only be in place by mid-week. Contractor BP also has a few other tricks up its sleeve, the main one being drilling a relief well over the next two to three months. The company is also considering using larger piping to bring the oil to ships on the surface, but this will further increase the flow of the gusher, making it difficult and risky. Another proposed method of covering the leak would be to use a mix of mud and concrete, but this would take two to three weeks to effect. Time is of the essence, and that already seems to be running out.

Europe and IMF wake from torpor over Greek debt

The EU and the International Monetary Fund finally pulled out of their slumber and pledged nearly $1 trillion to defend the embattled euro currency from relentless speculative attacks fomented by Greece’s debt crisis and fears over other debt-laden eurozone members. An 11-hour emergency meeting of European finance ministers acknowledged that markets had not taken to their months of posturing, and that Greece’s financial chaos seemed poised to spread to Portugal and Spain, and possibly farther afield. So now, the EU will make $75 billion available to stabilise the common currency over three years, while the 16 eurozone countries promised another $570 billion. The IMF will contribute some $320 billion more. The EU ministers released a statement saying the continent was facing such exceptional circumstances that the relief mechanism will stay in place as long as needed. The US Federal Reserve also jumped to the rescue by promising US dollars to Europe, along with the central banks of Canada, the UK, Switzerland and the EU, reopening a programme put in place during the 2008 global markets crash, whereby dollars were shipped overseas by various major central banks, to be lent to other banks to bolster markets. Japan’s central bank will soon follow suit. In other words, another massive series of bailouts has been enacted some 18 months after world markets first collapsed. So, the green shoots of recovery are not so green after all.

White House officials claim the Pakistani Taliban were behind the failed Times Square bombing in New York, citing new evidence, while downplaying the overall threat because of the attack’s lack of sophistication. But at the same time, the attack indicates the growing reach of terrorist groups linked to al-Qaeda, even as the CIA says their operations are seriously degraded. The Obama administration now says it knows the Taliban in Pakistan helped facilitate the attack, helped direct it and likely helped to finance it, although the new evidence hasn’t been made public. It seems that Faisal Shahzad, a US citizen of Pakistani descent, spent five months in Pakistan before returning to the US to prepare the attack. After the bombing attempt, US authorities arrested him aboard an Emirates Airlines jet in New York minutes before it was scheduled to take off for Dubai. Officials say it’s likely that Shahzad was acting alone and that it was an isolated incident. But there’s so much spin and speculation in media reports that it’s not easy to choose between the red wire or the green.

The administration of US President Barack Obama says indirect, American-mediated talks between Israel and the Palestinians have resumed, capping efforts by Washington to revive the Middle-East peace process after it failed ahead of Israel’s January 2009 invasion of the Gaza Strip. George Mitchell, the US special envoy to the region, is expected to shuttle between the two sides in months to come to help forge a joint vision of the outlines of a Palestinian state. The US says any violence during negotiations would seriously undermine trust and the White House will hold parties accountable. Palestinian President Mahmoud Abbas says he’ll work to keep Palestinian factions from scuttling the talks through attacks or incitement, and Israeli Prime Minister Benjamin Netanyahu says there’ll be no more construction at the Ramat Shlomo settlement in East Jerusalem for two years – a process that has scuppered the creation of conditions for talks in the past.