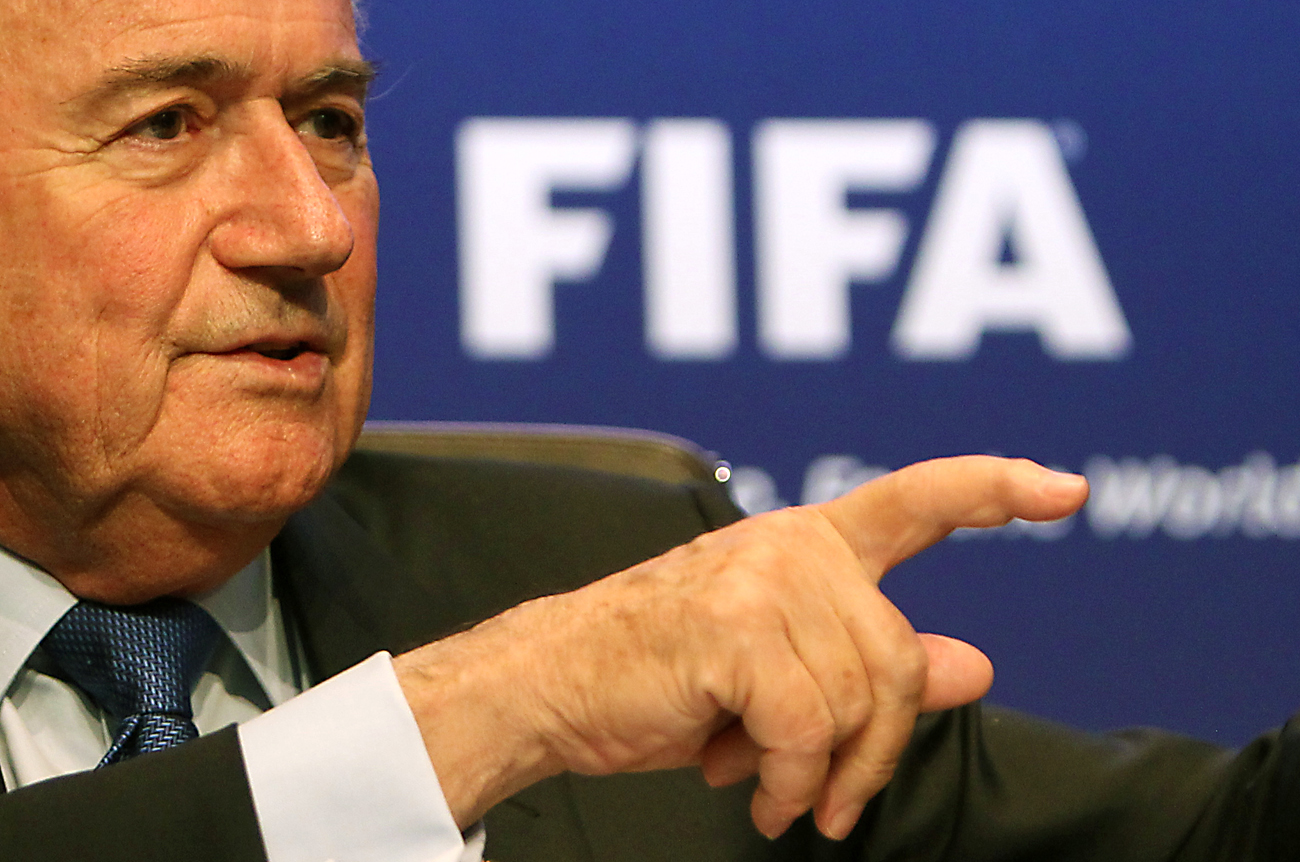 There’s a lot you won’t find in the official biographies of Fifa president Sepp Blatter. You won’t find, for example, anything about the numerous corruption scandals he’s been implicated in. What you will find, though, is a long list of his awards, knighthoods and honorary doctorates.

Like the story of the organisation that he runs, there are two versions of the life of Joseph S. Blatter. The first version you can find in the “Who We Are” section of the sparkling Fifa website, which in turn is a subsection of the “About” section. For context, then, let’s start at the top.

Officially, and according to the facts on the biography page – which, when it comes to this organisation, is apparently all the “official” you need – Blatter was born in the Swiss town of Visp, near the Matterhorn, in March 1936. After leaving school, he gained a Bachelor in Business Administration and Economics from the Faculty of Law at Lausanne University. He played football between 1948 and 1971, peaking in the top division of the Swiss amateur league. His other sports activities have included a board membership of Xamax Neuchatel FC between 1970 and 1975, membership of the Panathlon Club (society of sports managers), membership since 1956 of the Swiss Association of Sportswriters, and membership since 1999 of the International Olympic Committee. In June 1998, the facts on the Fifa website continue, Blatter was elected as successor to Joao Havelange of Brazil as the eighth president of Fifa. He had already served the world football governing body for 23 years, and his ultimate victory came at the 51st Fifa Ordinary Congress in Paris, France. According to Fifa lore, it was “direct support and the interest manifested by numerous national associations from all the confederations” that prompted him to stand for election in 1998. He was re-elected to a second and third term of office, the website visitor is lead to believe, for the same set of reasons.

What the Fifa website doesn’t mention, doesn’t even allude to, is the other reading of Blatter’s 1998 victory over Uefa president Lenart Johansson. This is the reading that suggests an amount of US$1-million was spent on “fixing” the 1998 Fifa poll; that a Middle Eastern leader jetted in around twenty US$50,000 cash gifts to tilt the presidency in Blatter’s favour.

There is no link on the Fifa website, for example, to an article in the UK Observer from March 1999 that reflects on the allegations of bribery. If there was, interested parties might have been able to read the following:

“Envelopes stuffed with cash, it is claimed, were [the] reward [of twenty leading figures in world football] for ensuring Blatter beat Lennart Johansson, the ‘honesty’ candidate, to become the soccer world’s most powerful leader.

“Johansson last night demanded that Fifa investigate the claims, which threaten to plunge soccer’s governing body into a corruption scandal like that enveloping the Olympic movement.

“Johansson, the Swedish president of European football’s ruling body, urged Fifa to follow the International Olympic Committee’s example by holding an internal probe. ‘When things go wrong like this, sort it out. Let’s have an investigation for the good of the game’, he told The Observer.”

Instead, as far as the IOC is concerned, all that Fifa has to say on the matter in their Blatter biography is this:

“Joseph S. Blatter is one of the most versatile and experienced exponents of international sports diplomacy and is totally committed to serving football, Fifa and the youth of the world. The International Olympic Committee acknowledged Mr Blatter’s achievements by electing him as a new committee member (the 104th) at the 109th session in Seoul on 20 June.” Photo: Fifa President Sepp Blatter and then Fifa General Secretary Michel Zen-Ruffinen attend a press conference following a meeting of the FIFA Executive Committee in Seoul, South Korea, on May 26, 2002. Blatter was re-elected FIFA president for a second four-year term, despite facing criminal charges of corruption in the Swiss courts and allegations of financial mismanagement during his first four years as president. REUTERS/Shaun Best

Neither is there any mention made on the Fifa website that Blatter’s 2002 candidacy was likewise marred by financial irregularities and backroom dealings. Back then, Blatter’s own colleague, former general secretary of Fifa Michel Zen-Ruffinen, leaked a 21-page dossier to Reuters that alleged the president had been involved in illegal payments, violating Fifa’s statutes, and rampant cronyism since 1998. Around the same time (February 2002), CNN reported that Farah Addo, a senior official with the African Football Association (CAF), had allegedly been offered US$100,000 to vote for Blatter – although he’d refused the offer, Addo claimed, “eighteen African voters accepted bribes…”

There are, too, reports to be found in the archives of most of the world’s leading media brands that will remind the interested reader of the time in early 2002 when Fifa sued Blatter. Following the publication of Zen-Ruffinen’s dossier, legal proceedings and a criminal investigation had been instituted against the president by senior Fifa officials – but by the end of May he’d won his second term anyway, and by December Zurich prosecutors had dropped all charges.

As for Zen-Ruffinen, as soon as Blatter had been re-elected, he set about getting rid of the man who he once said was “like a son to him”. Even Blatter’s critics had been surprised by the size of his victory over contender Issa Hayatou (Blatter took 139 votes, against Hayatou’s 56). So before ousting Zen-Ruffinen, Blatter was confident enough to make his intentions clear: “On Friday the executive committee will deal with our Mr Clean,” he told the press. “This is it. The latest negative comments from Zen-Ruffinen after my election put the nail in the coffin.” In the corridors of world soccer, Zen-Ruffinen has not been heard from since. The official Fifa biography of their president does not mention this period. In all good faith, it prefers to draw your attention to Blatter’s many attributes, one of which is his commitment to female football:

“The Fifa president’s many years of service in various domains of world football have given him the know-how and vision which are the prerequisites for steering football into the new millennium and for mastering the array of challenges in modern-day football. By setting up a permanent communications network based on state-of-the-art technology, Blatter aims to integrate not only the principal male protagonists into world football’s decision-making process but increasingly also their female counterparts – women players, coaches and referees. He also aims at closer cooperation with the confederations, national associations, leagues and clubs and a more open dialogue with Fifa’s economic, political, social and cultural partners.”

Bizarrely, no mention is made here of the time in 2004 when Blatter incurred the wrath of female footballers the world over by suggesting they “wear tighter shorts and low-cut shirts…to create a more female aesthetic.” As surprisingly, the Fifa website is mum on the many allegations of vote-rigging regarding the venues for World Cup 2006 and 2010. It also prefers to remain silent on French player Thierry Henry’s handling of the ball in a critical qualifying match against Ireland, an incident that led to a goal which knocked out Ireland and secured France’s place in the World Cup Final in South Africa. (Blatter, it seems, is a big supporter of France; it was claimed that the reason he didn’t attend the prize-podium event in 2006 was because France lost to Italy).

Watch: Investigative reporter Andrew Jennings doorsteps the FIFA president Sepp Blatter to ask if he can be allowed to attend a Fifa press conference in Zurich.

Still, the Fifa website makes up for these numerous oversights by providing a comprehensive record of the honours Blatter has amassed during his full and illustrious career. They are too many to list, so The Daily Maverick will name but a few: Knight of the French Legion of Honour; Order of the National Olympic Committee; Bahrain Medal of the First Degree; Japan’s “Grand Cordon of the Order of the Rising Sun”; South Africa’s “Order of Good Hope”; Honorary Doctorate in Philosophy from the Nelson Mandela Metropolitan University in Port Elizabeth.

It’s incredibly formidable stuff, enough to impress anyone, and we invite our readers to check out the complete list at the link below. We’ll end, though, with an excerpt from the book of a man whose groundbreaking investigative reporting on Fifa was highlighted in an article we published on Wednesday. The man’s name is Andrew Jennings, and the book is Foul!: The Secret World of Fifa: Bribes, Vote Rigging and Ticket Scandals (a longer excerpt of this section of the book was published in the Mail & Guardian in 2006, under the header “How Mandela was strong-armed in World Cup bid” [see link below to read]):

“Ten of Fifa’s committee attended the inauguration of President Thabo Mbeki’s second term of office in late April (2004). Jack (Warner) and his party got better seats than some world leaders and they even wangled a tour of Mbeki’s private residence. There’s a happy snap of the occasion: Warner, gold bangles jangling, pumps Mbeki’s hand, reluctant to let go. You can almost read the thought bubble above a grinning Mbeki’s head. ‘I can just about keep smiling if this guy brings us the World Cup.’

“Jack spent a night in the Presidential Suite that had been Mandela’s. Sleeping in Mandela’s bed! What more did the South Africans have to do? Much more. Warner demanded an hour of Mandela’s time and promptly invited him and fellow Nobel Peace laureate Archbishop Desmond Tutu to visit Trinidad. ‘Just as I was received here, he can expect a most hearty welcome by the people of Trinidad & Tobago,’ Warner told a reporter.

“Did Jack now presume to be Mandela’s equal? Mandela was 85 years old and his doctors wanted him to cut back on his international travelling. Desmond Tutu (72) was having treatment for cancer. If Mandela and Tutu really, really wanted South Africa to host the World Cup, Jack’s invitation was one they literally could not refuse…”

The relationship between Warner and Blatter? The former is Fifa’s vice-president, and like his boss he’s survived numerous scandals. Charges of black market ticket sales and requests for personal payments have affected him about as much as they’ve affected the suave Swiss capo – which is to say, not at all. The only difference between the two men is that Warner’s honours list is a little shorter. On the eve of World Cup 2010, Blatter’s domination of world soccer is close to complete. By all indications, he has bent the South African government to his will. We’re allowing it, perhaps, because we think the World Cup will deliver us another chance to prove our mettle as a nation. But what if our test is to prove, once and for all, that Fifa is a sham?

Read Bloom’s previous story: Is Fifa an organised crime group? Meet the man who’s out to prove it