David Cameron may be on his way to 10 Downing Street

David Cameron may be on his way to 10 Downing Street 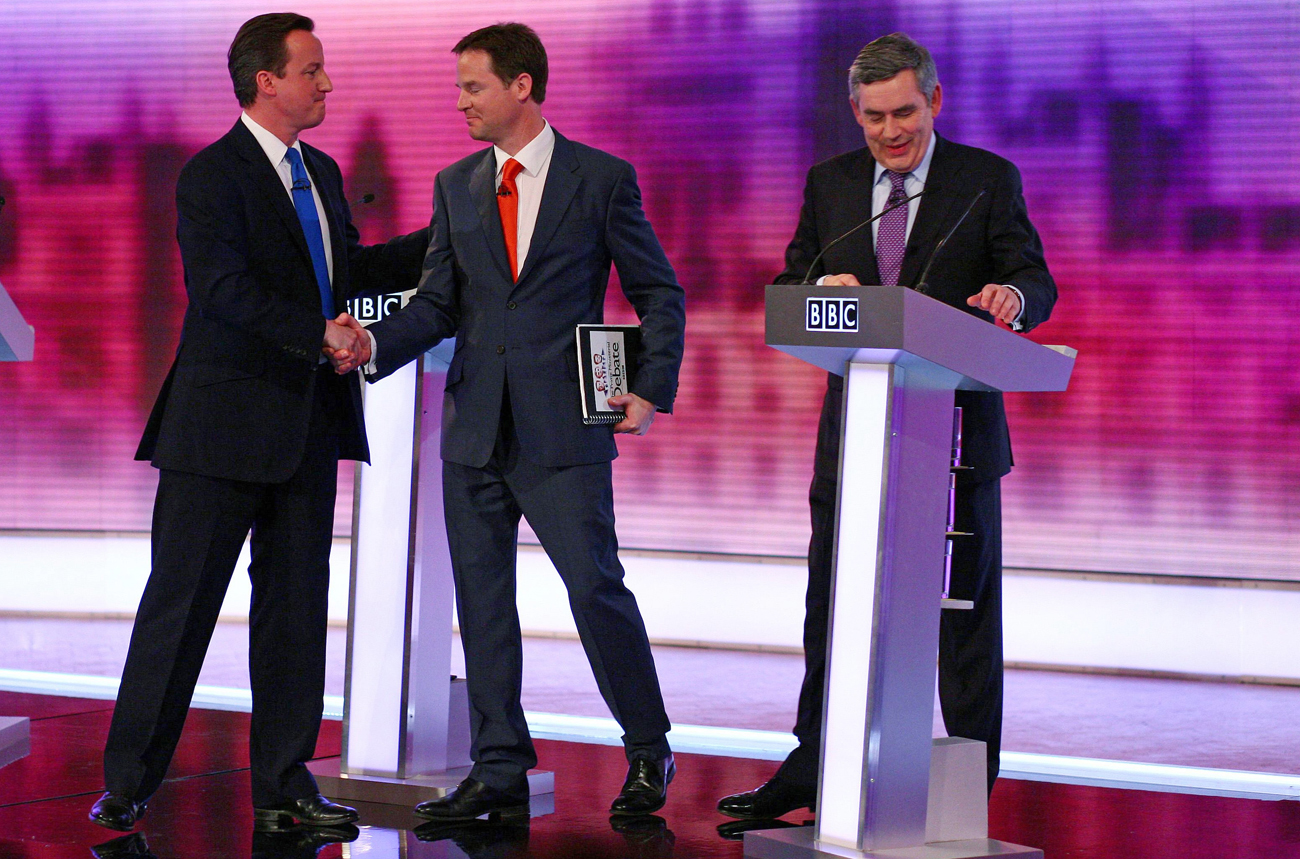 Nothing energises one as much as your opponent's bloopers, says an old political proverb. Okay, it’s not old - we invented it this very moment, but at the final party leaders’ debate on Thursday night, David Cameron was looking very much like a guy just about to fill out a “change of residence” form.

Cameron came on stage, guns blazing, calling for “change!” – seemingly aiming for a British version of Barack Obama. (Has somebody been swotting up on American televised debate styles, studying the videotapes?) Gordon Brown, meanwhile, sounded world-weary, negative and tired, trying to put his recent travails behind him with his best effort of the night being, “There is a lot to this job and, as you saw yesterday, I don’t get all of it right. But I do know how to run the economy, in good times and in bad.”

Meanwhile, Nick Clegg of the Liberal Democrats, hoping to capitalise on his recent upward bounce from the first two debates, was a bit caught off guard this time. Whenever the three men’s on-air mud-wrestling turned to immigration, illegal immigrants and how to fix a broken system, he was in the other’s crosshairs who, rather successfully, painted him as a friend of illegal immigrants.

However, while Thursday night’s debate was supposed to be about economics, reviving the economy and protecting the national treasury, much of the debate sounded like it was being conducted in a foreign language that only the three on stage actually understood.  Throughout the evening, Cameron would roar: “Taxes, bad bad, wuzz wuzz, pounds, rich, poor, waffle wiffle, jobs, must work hard, hippity hoppity, nose to the grindstone”. Then Gordon Brown would grimace, sigh, shrug and say: “Blah blah, fragile economy, humbug, bughum, poor, rich, young, old, pounds, glug glug, millionaires fortunes, grrr grrr, evil banks, ruff ruff!”

This left poor Nick Clegg nothing to say but: “Fairness, fanana, bibbity-bobbity-boo, pounds, young, old, fluff, fluff, the future can be bright, the sun is shining and we must all hold hands”. Clegg reputedly speaks five languages, but it wasn’t entirely clear on Thursday whether he could explain his economic policies in any of them. Photo: Politics as a dance. Reuters.

By the time it was over, the instant polling, and the opinion columnists, were clear: David Cameron had acted and sounded like a new, young government leader, while Gordon Brown was mired in third place. Brown’s negative, dour stance seems to have put voters off and, with just a week to go, the Tories are poised for the move into 10 Downing Street. There’s only one small problem – they may not win a clear majority of the actual seats in parliament and that is what counts in the UK, not popular vote totals. This will mean they will almost certainly have to form a coalition with somebody – the Lib-Dems, or some of the smaller, weird fringe parties.

Cameron’s positions of cutting taxes, cutting government waste and nudging Britain into being an entrepreneurial society that generates new jobs found its mark with voters, even if Thursday night’s debate did little to actually clarify how he was going to do all this. Brown’s problem, of course, was that he was defending a government, a budget and a set of policies that, in the face of the Great Recession, seemed stuck in a defensive crouch, although his best rip of the night was when he said of his opponents, “They are not ready for government, because they have not thought through their policies.”

Meanwhile, over in that other, third corner, Nick Clegg appeared to be in favour of goodness, as opposed to badness (i.e. spend wisely, cut waste, help people and be nice). But he was skewered on his complicated immigration argument that left people scratching their heads, wondering if he is in favour of better control or simply resigned to accepting the situation and registering the foreigners already in the country.

When he was not speaking in code, Cameron used the final moments of the debate to do what all winning politicians try to do – consolidate their base and steer straight for the middle ground. He summed up by saying, “There’s something you need to know about me, which is I believe the test of a good and strong society is how we look after the most vulnerable, the most frail and the poorest. That’s true in good times, but it’s even more true in difficult times. And there will be difficult decisions, but I want to lead us through those to better times ahead.”

This debate format, in the opinion of UK commentators, has already changed the nature of British politics. Almost certainly, debates will become a fixture of electoral life in that country in the future. Once again, however, the setting of the event seemed odd. The audience was prohibited from showing any kind of emotion – even boredom – and the set was a serious distraction for a TV watcher. To The Daily Maverick, it looked like an Apple screen saver, morphing from one colour to the next. At one moment David Cameron was backlit in bright blue and then, in an instant, he was framed in pulsating purple. This broadcast should have carried a viewer warning: “Do not attempt to adjust your set. The background has been programmed to generate random colours to catch you off guard and keep you awake.”