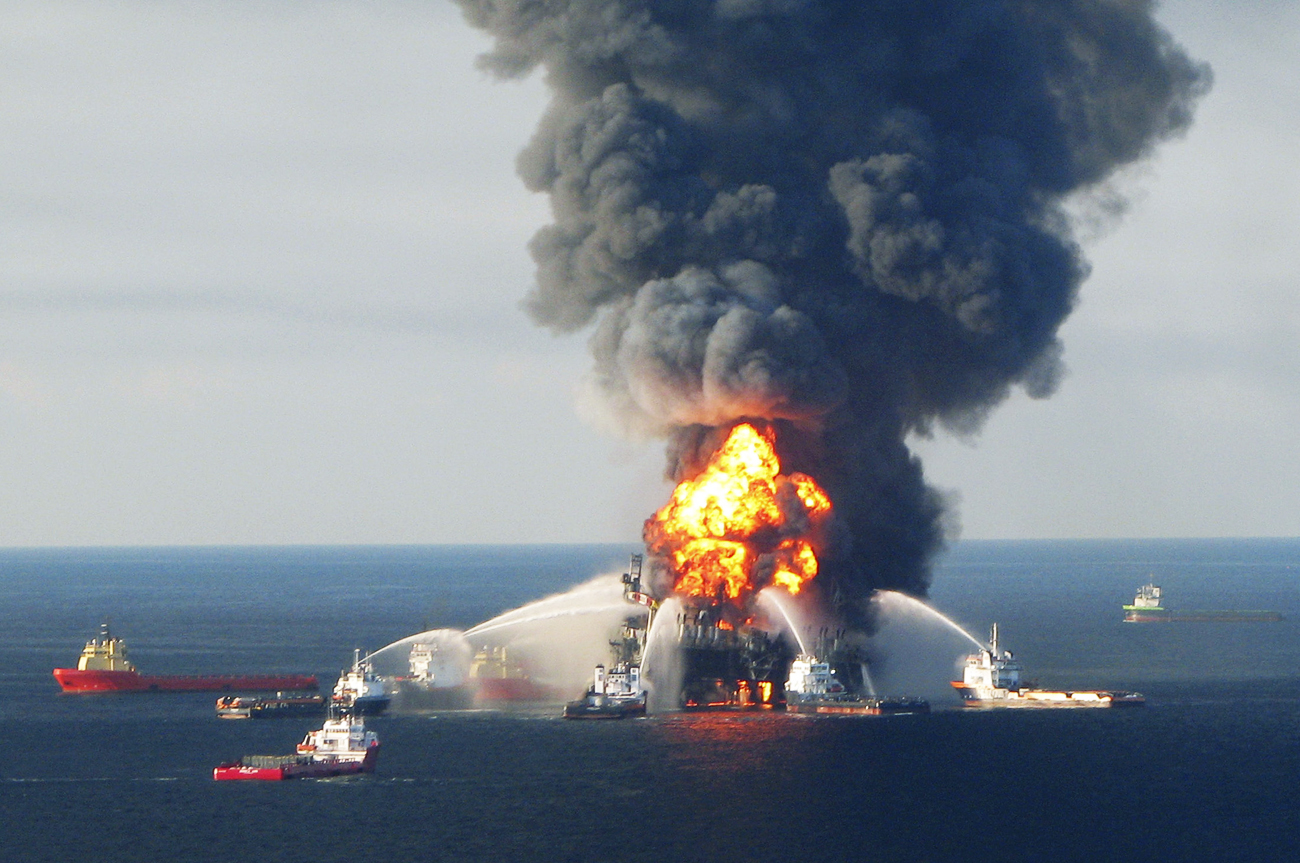 An oil platform that exploded and sank in the Gulf of Mexico has developed a new leak, according to the US Coast Guard. And predictably, the scale of pollution is much worse than was previously reported. Now, maritime authorities claim 5,000 barrels a day are leaking from the stricken rig, after earlier estimating 1,000 barrels a day were edging towards the Louisiana coastline some 30km away. The secretary of homeland security has briefed President Barack Obama, and government has offered to have the department of defence help contain the spill. That means the oil industry and emergency services can’t do nearly enough on their own, and that an aerial survey by the national oceanic atmospheric administration shows the oil slick is indeed likely to have a catastrophic effect on the surrounding ecosystem.

Photo: Fire boat response crews battle the blazing remnants of the off shore oil rig Deepwater Horizon, off Louisiana, in this handout photograph taken on April 21, 2010 and obtained on April 22. The oil drilling rig that had burned for 36 hours in the Gulf of Mexico sank Thursday as hopes dimmed for 11 missing workers and the risk of a major oil spill loomed, officials said. Picture taken April 21, 2010. REUTERS/U.S. Coast Guard

Thai troops fired on anti-government protesters riding motorbikes down a busy expressway in Bangkok, in an effort to stop demonstrations against the government of Prime Minister Abhisit Vejjajiva spreading to the city’s suburbs. The confrontation killed one soldier and 18 people were hurt, after earlier violence in the seven-week standoff claimed at least 27 lives and wounded nearly 1,000 people. There’s a danger that clashes between heavily armed troops and “Red Shirt” protesters who claim to speak for the country’s rural poor will escalate into full-blown war. The Red Shirts say Abhisit’s government came to power illegally, but they’re opposed by so-called “Yellow Shirt” protesters who have so far largely stayed out of the clashes. Police displayed 62 grenades they said were dropped by a motorcyclist who fled a police checkpoint, after earlier violence involved a deadly grenade attack. The protests have damaged Bangkok’s lifeblood tourism industry, but authorities have so far resisted clearing the Red Shirts out of the city with massed force for fear that would unleash widespread mayhem.

Senate Republicans abandoned their opposition to legislation that will likely rewrite the financial rules for Wall Street, opening the way for the most comprehensive revamp of the US economy since the Great Depression. The October 2008 collapse of markets saw American taxpayers spend hundreds of billions of dollars bailing out the nation’s largest firms. Holdout Republicans eventually realised they were on the losing end of a battle for public opinion, and now GOP lawmakers say they’ll switch to trying to change the bill on the Senate floor. Democrats threatened to keep the Senate in session all night, saying Republicans were stalling legislation. The content of the new legislation is likely to play a large role in mid-term elections this year. The Republican cause wasn’t helped by the bellicose performances of senior executives of Goldman Sachs at Senate hearings in Washington, where they stood accused of betting against financial products they sold to their clients. That exercise in market duplicity was roundly denounced by lawmakers from both the Democrat and the GOP, which is about as close to bipartisan support as the bill has seen. Now the real bargaining begins.

Asia’s powerful recovery from the global markets crash has one failing: Its sustainability is ultimately reliant on demand from Western economies. That means that the debate over China’s yuan currency has become even more pertinent, with the International Monetary Fund now weighing in and suggesting China should let its currency strengthen to help reduce the region’s dependence on exports. Senior IMF economist Roberto Cardarelli says Asia remains more dependent on external demand than other parts of the world, so if the global economy stalls again, it’s Asia that will suffer most. So far the Chinese have been acting as if they live in a bubble, rather than a deeply dependent economic relationship with the world at large. The IMF says that apart from China’s need to encourage stronger domestic demand to help balance its massive trade surpluses with the US and other nations, such reforms are needed across Asia. As things stand, the West invests heavily in Asia, and then sucks up its exports, while Asian companies and households save heavily, rather than driving strong domestic growth based on consumption.

German Chancellor Angela Merkel’s hopes that Greece’s economic crisis would remain on hold until a domestic election in May have been superseded by events. The German public is rabidly against bailing out the “poor man” of Europe, and Merkel faces political losses if she agrees in more than vague terms that the EU will do so. But now that Greek debt has been turned into junk by ratings agency Standard & Poor’s, her hand has been forced by credit markets and S&P’s concurrent downgrading of Spain and Portugal. So her political machinations have to give way to the more basic task of ensuring the stability of the euro and avoiding Greek default. As they say, a day’s a long time in politics.