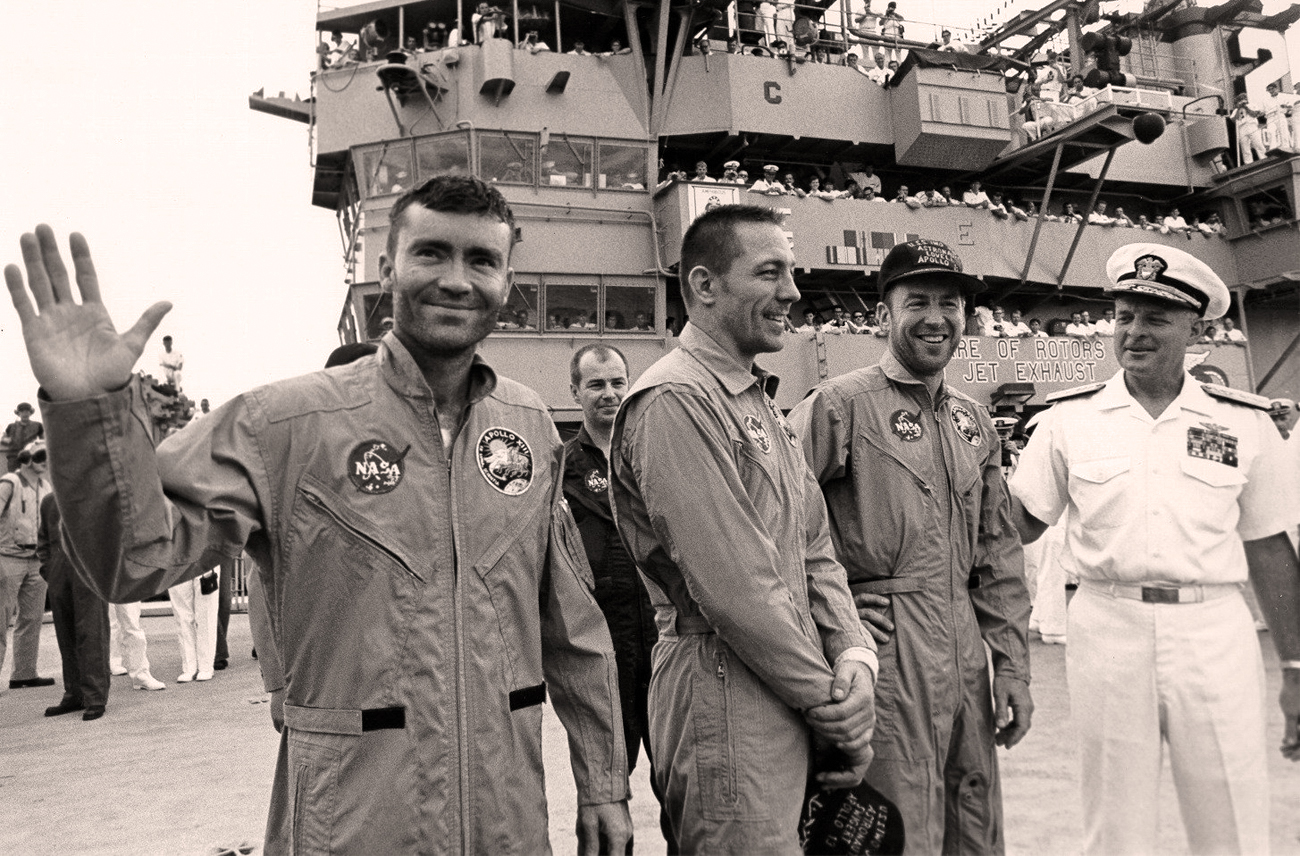 Men had died in space programmes before Apollo 13, and men and women have perished since. But Apollo 13’s victory over mechanical failure became an enduring legend of the extraordinary ingenuity of humans to improvise their survival in truly life-threatening circumstances.

Commanded by Nasa space veteran James Lovell, with John “Jack” Swigert as command module pilot and Fred Haise as the lunar module pilot, the rocket left Cape Kennedy on 11 April 1970, with a crew intent on being the third group to reach the Moon.

But, two days later, the crew members heard a sharp bang and Swigert uttered the phrase into the radio that has become a metaphor for failure that tests the soul: “Houston, we’ve had a problem.” The 1995 film, Apollo 13 gave us the slightly different version, “Houston, we have a problem.” This has become one of the 50 most recalled cinematic catchphrases, and the wording that has permeated our culture. On the craft when the problem occurred, Jack Swigert saw a warning light that accompanied the sharp bang and then said, “Houston, we’ve had a problem here,” communicating with brevity and extraordinary simplicity the truth that three men were now hurtling helplessly through space, 300,000km from Earth, their electricity failing, water and oxygen draining away and wondering if they would ever see their home planet again.

Apollo 13’s astronauts were the 20th century’s equivalent of Robinson Crusoe – but without Friday’s footprint in the sand. After the run of increasingly ho-hum success from Apollo flights around and then to the Moon’s surface, Apollo 13 brought us all up short to remind us that space flight is dangerous, technology has limits, things do fall apart, but sometimes they can be fixed.

From some frenzied, sharp thinking inside Houston’s Johnson Space Flight Centre and on the Apollo 13 craft itself, the three astronauts hammered out a chewing-gum-and-paperclip solution to save the craft. They nursed the electrical power required for guidance and powered flight, rationed their scarce oxygen and water and controlled the carbon dioxide that would have otherwise suffocated them before they could return by figuring out ways to scrub the spacecraft’s air with makeshift filters. A flight photo of the device constructed by the crew from duct tape, maps and other materials they had on hand as per instructions provided by Houston. (Nasa)

Back on terra firma, flight controller Gene Kranz led hundreds of engineers in devising the frantic rescue plan. The other day, at a special ceremony in Chicago commemorating these events, he said he never allowed himself to believe the plan could fail, although he added, “there is some point when you do the best you can and then it’s up to a higher authority to steer this mission to its ultimate conclusion”.

Apollo 13 was launched at 13:13 CST on 11 April 1970. The mission’s goal had been to explore the Fra Mauro highlands, a widespread, hilly area on the Moon thought to be composed of material ejected from the impact that formed Mare Imbrium.

Two days later, a fault in the electrical system of one of the service module’s oxygen tanks produced an over-pressure rupture which in turn caused a loss of electrical power and failure of both oxygen tanks. The rupture happened after mission control had asked the crew to stir the hydrogen and oxygen tanks so as to increase the accuracy of their quantity readings. Damaged Teflon insulation on the wires to the stirrer motor in oxygen tank 2 caused a short circuit and ignited the insulation. With the cause unknown at the time, the crew initially thought that a meteoroid had hit the ship. The failure then caused further damage that led to a shutdown of the fuel cells that generate electricity and water. The crew was forced to shut down the command module completely, and as their ultimate fall-back rescue plan, the three men moved from the main craft to the Spartan, the cramped, freezing lunar lander, as they rationed their dwindling oxygen and electricity supplies.

With the lunar module now their space-borne lifeboat, they swung around the Moon, picked up momentum as with a slingshot and aimed for Earth – and home. In the process, they turned what had first seemed to be entirely quotidian into a life-and-death struggle played out for the world’s TV and radio audiences, creating, almost by the way, one of Nasa’s finest moments, right up there with Alan B. Shepard’s first suborbital flight and Neil Armstrong and Buzz Aldrin’s walks on the Moon.

In 1994, Lovell and co-author Jeff Kluger wrote “Lost Moon,” the story of Apollo 13’s flight. The book became the basis for the 1995 movie with Tom Hanks and Ed Harris that helped renew the public’s interest in Apollo 13 at a time when it had started to fade. The book and then the film, reminded us how much there is left to explore in the solar system before we actually begin to achieve the promise that once seemed so close after the early Apollo flights. It seems a pity, therefore, that humankind is still contemplating how it may, one day, finally return to real space flight after a generation of nibbling at the edges. During their brave fight for survival, the Apollo 13 astronauts managed to accomplish that rare feat: For a few short days, the world stood united, holding its collective breath and praying to its many gods in its many languages, for their safe return. For a few days, humanity stood together, forgot their differences and accepted what binds us, wanting our ambassadors back to the Mother Planet.

Shortly after the safe touchdown, the world returned to its usual cacophony of nuclear threats, warring ideologies and religions, terrorism and mutual hatred. But for one moment, we all shed a tear of happiness when we learnt they were safely back. For that, Jim, Fred and Jack, we owe you an astronomical debt of gratitude.

For more, read the Houston Chronicle, Yahoo/AP, the New York Times and Wikipedia