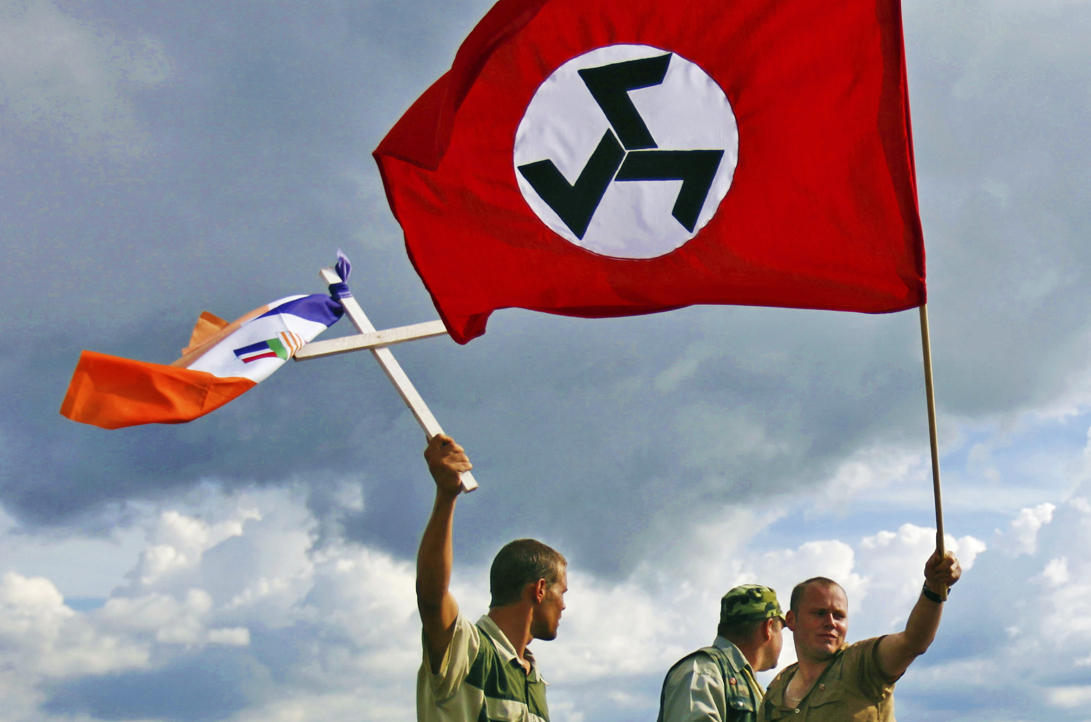 It’s been the largest gathering of the white far-right since the early 1990s, and in a certain sense it’s been marked by non-violent and acceptable defiance. In a bigger sense, though, it’s been a day stained by symbols of racism and odious hatred.

Thus read a makeshift sign attached to a fence on a suburban side-street in Ventersdorp. The sign was the first in a series of five, and the others were just as symbolic of the mood at slain AWB leader Eugene Terre’Blanche’s funeral.

There was a message evocative of the famous South African hospitality that visitors to the FIFA World Cup can expect: “Come to World Cup and bleed at the hands of black racists.” A message of pacifism and non-violence from the anti-gun lobby: “Wit mense handig geen wapens terug aan staat.” (White people don’t hand your weapons in to the state.”)

Another message of welcome to World Cup visitors: “Britain, you saw what happened to your reporter. Your fans will not be so lucky.”

And a fetching message of harmony amongst the races: “Malema, jy is die selfde kleur as my kak.” (The Daily Maverick doesn’t really feel like translating this one).

On their way out the church grounds, many of the thousands of mourners who attended the funeral stopped to read the signs and to laugh; once the service was over, the general feeling was more one of celebration and defiance than sombre reflection. But things started off tense. The South African Police Service were on high alert from early in the morning, and their helicopters could be seen circling the skies above Ventersdorp. The back-to-back traffic that stretched for kilometres up to the turn-off to the small platteland town was another clue that Friday April 9 was not going to be a normal day in South Africa.

At the BP garage the first biker gangs in their leathers were spotted, and the first men in muddy four-by-four bakkies wearing khaki; there would be hundreds more where they came from. A Toyota Fortuna had two German flags stuck to its doors, which seemed odd, until the first AWB flags were seen – and later, on the church grounds, a Swastika arm-band attached to the khaki shirt of a bearded white man with no shame.

An entire suburb of Ventersdorp soon became a car park, and a procession of Afrikaners bearing old South African flags and Vierkleure marched towards the church. The theme track of the day, belting out on dozens of sound systems, was Bok van Blerk’s “De la Rey” – every once in a while the fetching tune would be drowned out by bikers revving their superbike engines. A woman with dyed purple hair and matching purple pants-suit explained to us that she’d driven in from Rustenburg, to show her solidarity with the white farmers who were being murdered. At the top of the road, near the entrance to the church, a policeman physically removed a black photographer from out of the path of the hearse carrying Terre’Blanche’s body. “Take your hands off me,” he shouted. A few tall AWB members in dark brown fatigues moved towards the scene. “Nou sal daar kak wees,” one said.

Luckily, there wasn’t kak. Instead, there was a very long sermon from a preacher, which was broadcast on powerful speakers to the huge crowd. Many of the mourners brought camping chairs, but out of respect for the occasion there was no braai-ing or alcohol consumption. An elderly woman in a camping chair said to her husband, in Afrikaans: “The sun isn’t shining, it’s not too bright. There’s a slight breeze, and it’s not too cold. It’s a blessed day.” A supporter of Eugene Terre’blanche holds his picture during his funeral in Ventersdorp in South Africa’s North West Province, April 9, 2010. REUTERS/Siphiwe Sibeko

The fire and brimstone sermon continued for an hour. Amongst the things the preacher said were that murderers and robbers shall die twice – the second time when God does not allow them into the kingdom of heaven. He also said, “A democracy is anti-theocracy…and we need to be ruled by a theocracy.”

Outside the grounds, when the preacher was done, a man was spotted with a flagpole that bore two flags – a large Stars and Stripes, and a smaller old South African flag. Why the Stars and Stripes? “For our kids in America,” said the man, whose name was Johan. “One is in Virginia and the other is in Miami. They went because there are no jobs here.”

Later in the day the mourners moved to the farmhouse of Eugene Terre’Blanche, about ten kilometres out of town. As we sat in the car on the side of the road and watched the cars drive past, we saw the hearse approaching. Dozens of young white men in Khaki stood on the verge and saluted.

At the time of writing, the burial is taking place at the farmhouse. Apparently, a large AWB member in military regalia has just threatened to “remove” The Daily Maverick  photographer if he doesn’t “fall back”. Five horsewomen on large black stallions have just trotted past the car. It’s been a strange day indeed, and one that’s said much about the fragile state of the country right now.

Update: The Daily Maverick photographer, thank God, is fine. He is now back in the vehicle and wearing a kippah (Jewish skullcap) that he found in his camera bag. He is playing Jewish kletzmer music loud enough to rival the tunes of the Boers. His name is Toby David Shapshak.