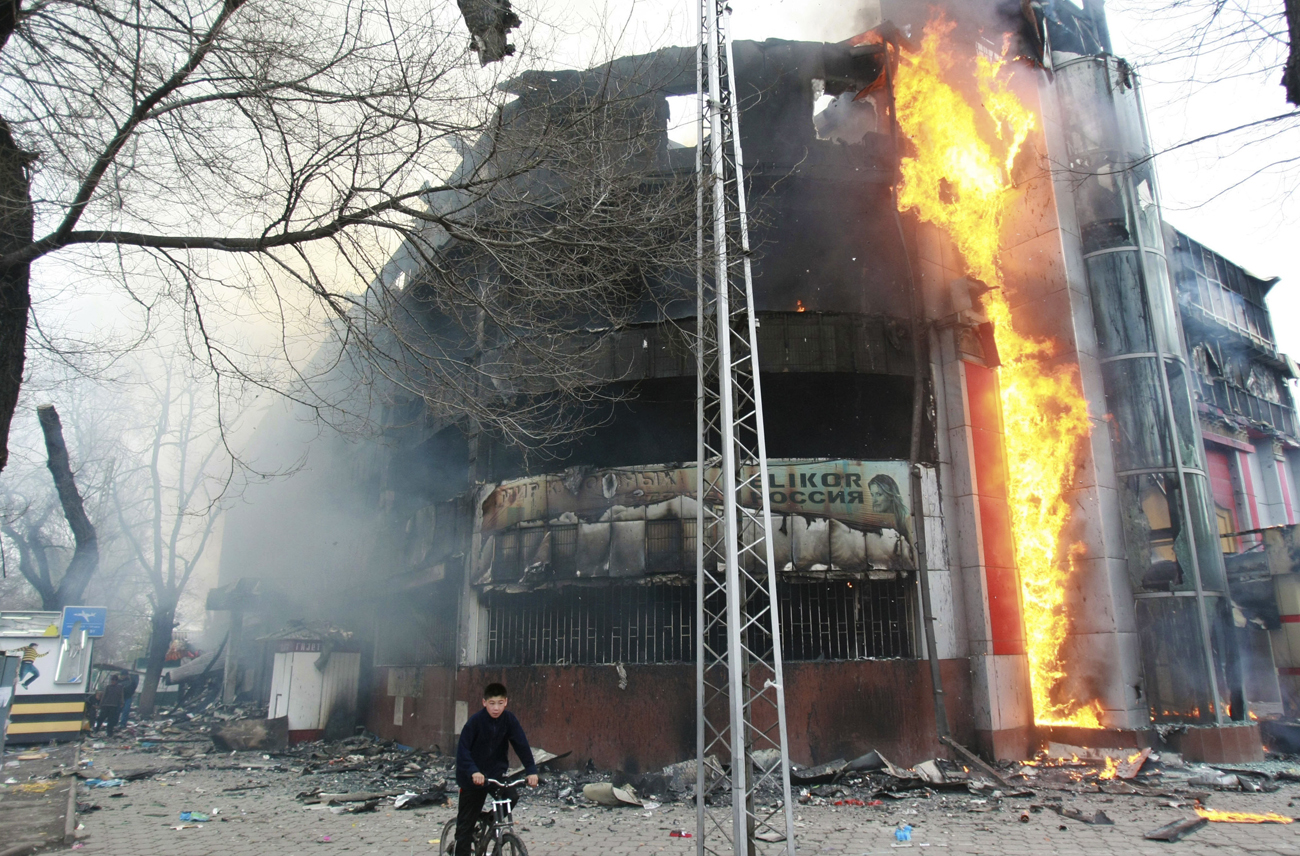 Kyrgyzstan’s President Kurmanbek Bakiyev fled the capital Bishkek in the wake of bloody clashes, leaving a transitional government led by former foreign minister Roza Otunbayeva to dissolve parliament and say it would take office for six months. The clashes between protesters and security forces left 68 people dead and hundreds injured in the Central Asian country, that’s home to a key US air base. But calm has now descended on government headquarters, ironically known as the White House, with little police or troops presence. Bakiyev, who came to power in a popular uprising five years ago, is said to have to have escaped to his home region in the south of the country. It’s not yet clear who supports which parties. No doubt that’ll soon become apparent.

A boy rides a bicycle in front of a burning shopping centre in the centre of Bishkek April 8, 2010. Kyrgyzstan’s opposition said on Thursday it had taken power and dissolved parliament in the poor but strategically important Central Asian state after deadly protests forced President Kurmanbek Bakiyev to flee the capital. REUTERS/Vladimir Pirogov

Anti-government demonstrators in Thailand vowed to stage a mass rally in Bangkok despite a state of emergency being declared after protesters briefly broke into parliament. Prime Minister Abhisit Vejjajiva is fighting a long-running battle with supporters of former leader Thaksin Shinawatra, ousted in a 2006 military coup over allegations of corruption. The demonstrations over the rights of the rural poor have gone on for weeks, crippling government. Amid fears that the showdown could end in serious violence, the “Red Shirt” protesters have dared a government crackdown.

The US and Russia have complemented Prague’s spring by signing a new nuclear treaty in the historic city that will still leave the world littered with thousands of atomic weapons. Under a so-called New Start treaty, the two powers will clean up their arsenals but still deploy 1,550 warheads each, along with thousands of other weapons not covered by the pact. US President Barack Obama has recently turned the US nuclear strategy away from Cold War rivalry towards preventing so-called rogue states – such as Iran – from acquiring warheads, and ensuring they don’t get into the hands of groups such as al-Qaeda. Obama has to balance the deal with Russia between arms control advocates, who seek eventual complete disarmament, and US national security hawks who say America needs to assure no other nation is tempted to challenge its power.

Afghan President Hamid Karzai has booted out Afghanistan’s top two election officials, who the US and EU say sanctioned widespread fraud that favoured Karzai during last year’s presidential race. Western diplomats say until replacements are named, the verdict is out on whether this will make any difference. Karzai’s relations with his Western allies, especially the US, have cooled dramatically in recent months. Just the other day, whether in jest or not, he threatened to join the Taliban, and has been seeking to blame the West for election fraud as the country fights the war on terror. Some officials fear that possible replacements for the election officials could be those who favour Karzai’s political longevity, compromising the independence of the election process that benefited what’s seen as a corrupt and inept administration. And it all started out with so much hope and promise…

A Qatari diplomat, trying to smoke a cigarette in an airplane toilet, sparked a bomb scare on a flight between Washington and Denver, months after an attempted terror attack on a Detroit-bound airliner. Fighter jets scrambled and law enforcement officials were put on high alert after the man joked that he had been trying to light his shoes, in an apparent reference to British “shoe bomber” Richard Reid, who tried to blow up a flight from Paris to Miami in 2001. No explosives were found on the man, but his macabre sense of humour further exposed fears about US national security and the threat of terror since the twin towers fell in New York.