Behind the headlines: Mugabe wins again

Behind the headlines: Mugabe wins again 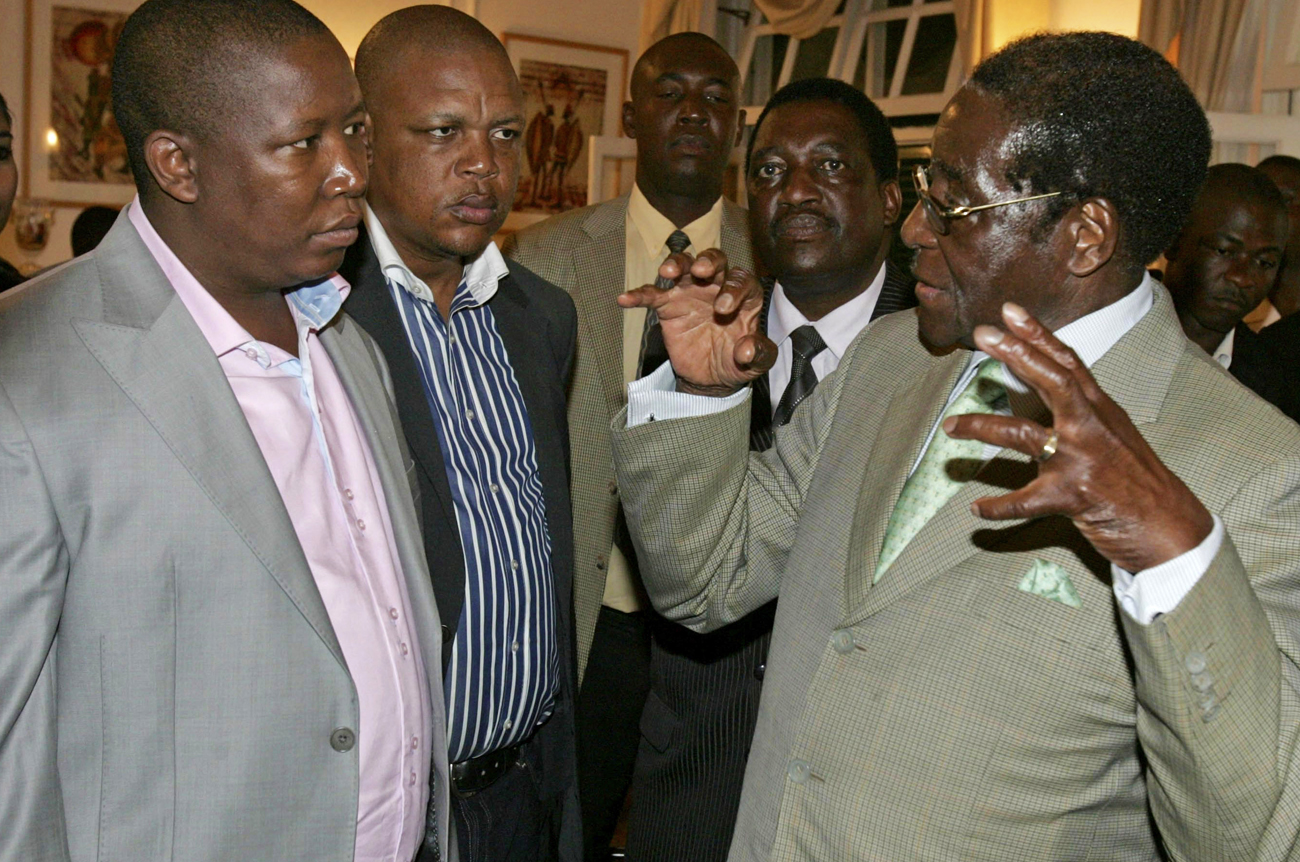 While everybody was slightly distracted by Easter and the murder of the country’s chief white supremacist, strange and disturbing messages were circling through Zimbabwean media. Sender: No-one other than Zanu-PF, it seems.

But first, South Africa: Of all the front-page headlines on Sunday, City Press’s got closest to the political heart of the matter. “MALEMA’S ZIM VISIT SPLITS ANC,” the newspaper declared in bold caps, with only the much smaller sub-header acknowledging the story’s more controversial angle – “Mugabe treats youth leader like a visiting head of state”.

Of course, given City Press’s predominantly black middle-class readership, it didn’t need to play on white fears. The Sunday Times would have sold thousands of extra copies with the headline “Malema lauds Bob, says SA will copy Zim’s land seizures,” and the same would have gone for Rapport’s “Zuma steun glo Malema se kuier by ‘kameraad’ Bob,” but there was a question behind all this emotionalism that City Press wanted answered, and it was a damn good one: what’s the official ANC line on the youth leader’s ostensible love affair with Zanu-PF?

In a nutshell, as news editor Japhet Ncube reported, there wasn’t an official line. Apparently, President Jacob Zuma’s government had been trying desperately to save the faltering coalition talks between Zanu-PF and the opposition Movement for Democratic Change (MDC), and as of last week Friday – when Malema left for Harare – these talks were at a genuinely vulnerable stage.

“The timing is just wrong and downright insensitive,” one (nameless) ANC official told City Press. “How can the ANC allow Julius to go to Harare? It hurts Zuma’s efforts to bring political stability to Zimbabwe.”

As Rapport made eminently clear, though, Zuma had already given the Youth League president his blessing, and asked him to send regards to comrade Bob. Zuma’s spokesperson Zizi Kodwa confirmed that the South African head of state had no problem with the trip, and even suggested that Zuma would have given Malema some “pointers” about the situation on the ground. But Kodwa’s most revealing statement was this: “We cannot stop an NGO like the ANCYL from doing political work anywhere, including Zimbabwe.”

The ANCYL is an NGO? Really? A standalone organisation as independent from the ANC national executive as, say, Greenpeace?

It was another blatant instance of ruling party double-speak; when Kodwa said “we cannot” stop the Youth League, he actually meant “we will not” stop them, irrespective of how divided the organisation might be on the issue.

Inescapably, it led to the next question, one that the mainstream South African press didn’t directly address, but Zimbabwean media did: WHY would the senior ANC decision-makers want to risk a further split in their ranks and allow the firebrand youth leader to go on a “fact-finding” mission to Zimbabwe?

Which brings us to the already-mentioned strange messages in the Zimbabwean press. On 29 March the Zimbabwe Mail, an independent online news entity founded in 2007 by the same UK-based businessman, Brighton Musonza, who launched the Geoffrey Nyarota-led Zimbabwe Times, published a story that seemed too bizarre to be credible. “[The] ANC is planning Zimbabwean-style land invasions after the FIFA 2010 World Cup,” it announced in the lead paragraph, “amid reports Zimbabwe’s Zanu-PF and War Veterans Association will provide crucial support for the programme…”

There were a couple of clues that this story needed to be treated with suspicion. First, the Zimbabwe Mail’s major source was an unnamed Zanu-PF security department official; and second, the Daily News, Nyarota’s respected vehicle and the site you now land on when you enter The Zimbabwe Times URL, didn’t carry any variants or follow-ups.

Still, in the context of what Malema subsequently said during his Zimbabwe visit about that country’s land reform programme – “In South Africa we are just starting, but we hear that here at home in Zimbabwe you are very far” – there was something about the Zimbabwe Mail story that warranted a second look.

“This week, a high-level delegation in the South African security forces, intelligence and media with close links to the ruling party ANC are travelling to Zimbabwe and they will spend three months training at the Zimbabwe National Army’s Staff College,” the report stated.

“Senior Zimbabwe National army officers who led Zimbabwe’s land invasions will train their South African counterparts and impart knowledge based on their experiences.”

In case we needed to be reminded of the implausibility of such sentiments, Professor Tawana Kupe – Zimbabwean native, media studies expert, and dean of the faculty of humanities at the University of the Witwatersrand – told The Daily Maverick he thought the story was a bit far-fetched. “It serves the interests of Zanu-PF to spread propaganda like this,” he said. “It shows that there are high-level connections between them and the ANC.”

Kupe employed the same phrasing when explaining why (in the real world) Malema was received by Mugabe as if he were a visiting head of state. “Obviously, Zanu-PF wants to demonstrate that its programme of land reform has the support of the ANC liberation movement. That is why Mugabe received him at such a high level. It’s all part of the political perception game. They are frightening the MDC by showing that the ANC and Zanu-PF are brothers. They’re saying, ‘Don’t be fooled!’”

The political perception game, as always, was played out in this instance through the media – and it wasn’t only the Zimbabwe Mail that were used as pawns. It would have been chiefly to the South African press that the MDC would’ve looked when trying to ascertain the nature of relationship between the ANC and Zanu-PF; behind the obfuscation and the double-speak, the answer would have been plain: very friendly.

Malema’s visit to Zimbabwe has puzzled many an analyst. But it appears that it was a great mistake to look at it from the South African side. Come to think of it, whichever way you frame the question, one thing is certain: the major winner after Malema’s triumphal Zim trip, given the wave of uncertainty it created on both sides of the border, is once again Robert Mugabe.

Photo: Julius Malema is welcomed by Zimbabwean President Robet Mugabe at State House in Harare, April 5, 2010. Concerns over increasing racial polarisation in South Africa have been thrown into the open by a row over Malema’s singing of an apartheid-era song with the lyrics “Kill the Boer”. REUTERS/Philimon Bulawayo