Video: the Ventersdorp skirmish that nearly became a battle 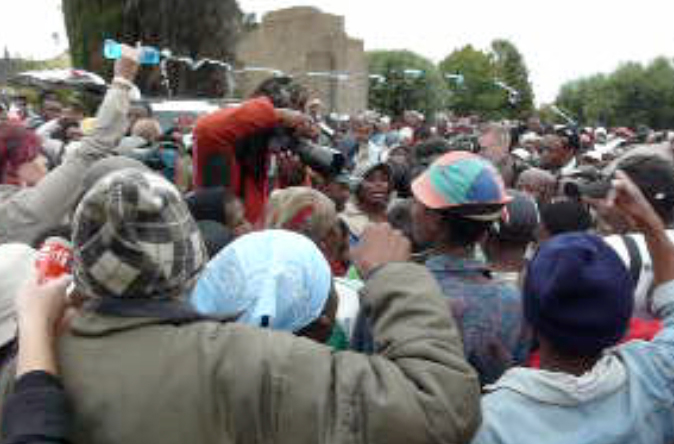 On Tuesday morning a single woman armed with a bottle of water nearly sparked a race battle in Ventersdorp. An illustrated, blow-by-blow guide.

Here’s how it went down. After much standing about, first in light drizzle, then in weak sunshine, representatives of the family of Eugene Terre’Blanche emerged from the Ventersdorp magistrate’s court to update waiting supporters on the legal route.

The crowd responded with a pretty decent rendition of Die Stem, the old SA anthem. Black onlookers, only metres away, quickly responded with the new anthem, which segues from Nkosi Sikelel’ iAfrika to the first verse of Die Stem in Afrikaans. They enjoyed it so much that they did it a second time. And that was when a woman armed with a bottle of what looked like water (but according to some reporters was an energy drink) struck.

Afrikaaner Weerstandsbeweging spokesman Pieter Steyn was still trying to make his way to the scene, presumably to calm tensions, when waiting police sprang into action. They quickly formed a human chain between the black and white groups, eventually establishing an empty corridor about four meters wide.

But the court looks out onto an open piece of ground, with only monuments to the AWB and boer leader Andries Pretorius on it. Plus what turned out to be a miniature quagmire.

As police attempted to deploy strands of barbed wire between the two groups, the Nyala armoured vehicle towing the wire trailer was caught in the mud. Mainly white men gathered around it, good-naturedly taunting the police and loudly offering the services of tractors to pull the police vehicle out of the mud.

But that gathering made for a mix between the white and black crowds again, and that is where things nearly got ugly. Taunts degenerated into a rendition of Bobbejaan klim die berg (the baboon climbs the mountain), and there was at least one determined charge on the police line, which formed between the groups in the nick of time.

However, AWB supporters accepted the call from leaders for calm, most of them only after an appeal was made to respect the Terre’Blanche family. The white group rapidly dwindled as individuals made their way towards an impromptu gathering on the outskirt of town – some walking right through the black crowd without further incident.