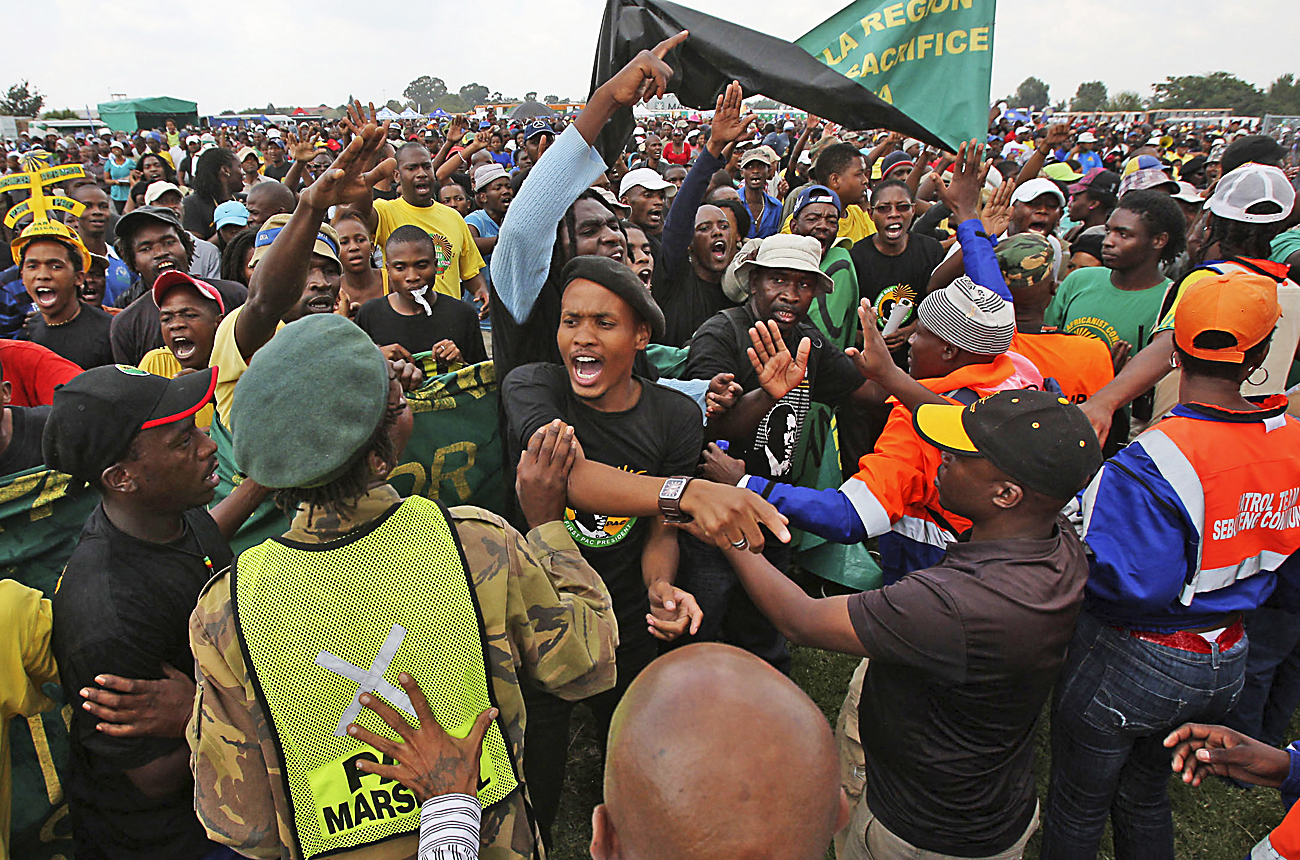 ANC Youth League president Julius Malema is getting some fabulous press by saying stupid and irresponsible things. So what to do if you are Malema’s political competitor? Say more stupid and more irresponsible things of course, and all the better if it’s about him personally. Like, for example, “we will kill you”.

The debasement of South African political discourse has taken a further step toward the worryingly absurd with a statement from Pan Africanist Youth Congress (Payco) President Pitso Mphasha that Malema would be “injured to death” if he does not apologise for misleading the country about the Sharpeville massacre.

The events of the Sharpeville massacre are a traditional hot potato in relations between the ANC and the PAC, since the ANC likes to believe that it was responsible for all civil disobedience during apartheid. But, in this case, as a matter of historical fact, the PAC were the actual organisers of the particular campaign which led to the shootings.

At a commemoration event Malema, in his usual delicate and precise way, suggested that in fact the protest action about the imposition of the pass laws had been organised by the ANC, but it was then hijacked by the PAC. The PAC has for the past week been expressing its outrage at this suggestion, which was in fact repeated in various permutations by other ANC leaders too.

At a media conference on Friday this all burst open, and Mphasha reportedly said: “We are saying to Malema to apologise within five days or we will injure him to death… He will either end up in a hospital or in a mortuary.”

This was not the only hyper-ventilating that Mphasha indulged in. He also demanded that the government change Human Rights Day to Sharpeville Day within 10 months. If the government did not listen, the PAC would “turn the country upside down”, he was reported as saying. Mphasha could not be contacted to confirm his comments.

The PAC proper was quick to distance itself from these rantings, with PAC Secretary General Mfanelo Skwatsha saying that the comments were “unfortunate” and not part of the PAC’s philosophy. “We don’t endorse the killing of others, and we want to believe that the best way is to educate people but not to threaten them.” The PAC would meet with Mphasha to discuss the issue on Saturday, he said.

The problem is that what is good for the goose is presumably good for the gander. Malema may discover he has little room to complain – which does not mean he won’t – since he himself is not above endorsing the deaths of others. Malema in involved in a different dispute with the civic body AfriForum over the fact that he twice participated in a “shoot the boer” song. In response to the Payco threat AfriForum spokesman Willie Spies said it “has gone a bit far”.

“It actually shows how dangerous these kinds of remarks are and how critical it is to get rid of these remarks and to get it out of our system.”

Spies said that freedom of expression was important in a democracy, but could become uncontrollable if used in a divided society. “And that is what I am hearing now.”

The police also think things are a little out of hand. “It is worrying… it doesn’t bode very well for society,” Zweli Mnisi, spokesman for Police Minister Nathi Mthethwa told Sapa.

The scaling up of the exchanges demonstrates the ratcheting-up process that is a common consequence of populist politics. To capture the headlines, you need to make statements of ever increasing volume and volatility – and for others to dislodge the populist from his media perch, they have to engage in the same process.

Pity the peacemaker in the middle of this verbal maelstrom.

Photo: Members of the Pan African National Congress (PAC) chant slogans during the commemoration of the killing of 69 people at Sharpeville black township a half century ago, in Johannesburg, March 21,2010. REUTERS/Stringer