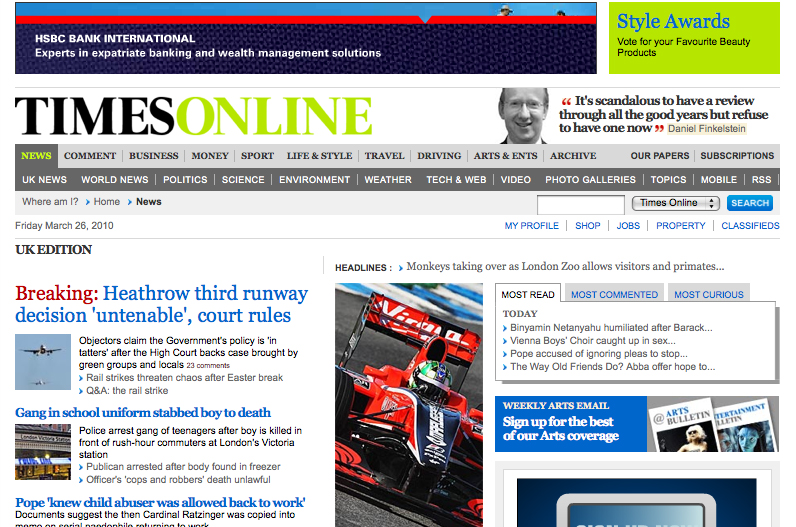 Rupert Murdoch’s News Corp. is putting its money where its mouth is. Not long after Murdoch said he’d charge for Internet content, the websites of The Times and Sunday Times newspapers in Britain will test the market’s appetite to pay for mass-market news online. From June, access to the pay-only websites will cost $1.49 a day, or about $3 a week. Subscribers to the print versions will get free access, in what the company says it just a start in making the business of news an economically viable prospect. The Web has killed off many papers in the US, and the Europeans are also struggling as print advertising declines at the same time as Internet ads are distributed cheaply among many rivals. The UK’s Financial Times and News Corp’s the Wall Street Journal already limit online access, but it’s not yet publicly known how this has affected their bottom-lines. One thing’s for sure, most people under 30 (and many above that age) will find their daily reading diet somewhere else.

The might of China’s Communist Party is intimidating several Chinese firms that do business with Google. They’re reported to be reconsidering their ties with the world’s largest search-engine company, after its clash with Chinese authorities over internet censorship. Xunlei, a video downloading site supported by Google, told the Financial Times its reviewing relations with the US company. So is Sina, a leading Chinese news portal, whose search function is powered by Google. Others say they’re unsure of what to do when their contracts expire. Already, two of China’s largest cellphone firms say they’ll no longer use Google’s search-engine. Two things come to mind. The Chinese tech community may benefit in the short-term, but will soon hit a brick wall when domestic networks stop talking to the rest of the world.

Obama under pressure over Chinese currency

The Obama administration is under increasing pressure at home to take action against China for undervaluing its currency. But the countries share the biggest trading relationship on the world, so mutual threats and sanctions will only destabilise global growth at a tricky time for economic resurgence. Political clamour in the US means the Treasury Department will soon have to decide on whether to label China a currency manipulator, for pegging its exchange rate at what’s thought in the West to be undervalued by as much as 25%. This makes Chinese exports cheap on world markets, and gives it massive surpluses with its most important trading partners in the US and EU. China’s economy is rebounding to levels last seen before the October 2008 crash, but unless it seriously stimulates domestic demand for foreign goods in future, economics will dictate that it precipitates the next great global collapse.

Geely’s buyout of Volvo may be nigh

Chinese Vice-President Xi Jinping is off to Sweden amid rumours he’ll attend the signing of a deal whereby Zhejiang Geely buys Ford’s Volvo car subsidiary for as much as $2 billion. Ford’s been trying to dump Volvo to concentrate on its own core business, but the Zhejiang Geely deal has been held up by red tape in China. Now the parties are keen to see finalisation of a sales and purchase agreement scheduled for the end of March. It’ll be the biggest takeover of a foreign car manufacturer by a Chinese firm, driven by a desire to enter Western markets and access the technology and brand recognition it badly needs. It’s potentially a win-win situation for everybody involved, as China is now the world’s largest car market, and Geely wants to build a new factory in China to nearly double Volvo’s annual production. There’re a few problems though. Unions at Volvo in Sweden don’t back the deal, and there’re still questions about which investors support the buyout, the scope of Volvo’s capital needs, and the composition of management.

Western business executives once got a hearty welcome in China, but now dozens of US companies are getting a taste of something different: China’s export-driven economic might, fuelled on the back of decades of huge Western investment, has slowly empowered domestic companies, especially state-owned enterprises. Now, new government rules that favour local firms for major projects have the potential to unwind billions of dollars worth of foreign technology transfer each year. Despite being a long-time member of the World Trade Organisation, China’s beginning to behave as if the space-race is starting anew. But locking itself into insular domestic growth while trying to hold on to its export-driven model of development, will be a grand act of nationalistic folly in the long-term, as its biggest markets will shrink. It may still dump cheap goods on Africa, Asia and South America, but it could start a new Cold War.

BA and union at stalemate over crew perks

British Airways’ chief Willie Walsh says travel perks will never again be reinstated for striking cabin-crews, despite the Unite crew union saying any peace deal must include the travel concessions. Workers and bosses are at loggerheads, and are rapidly reaching a stalemate. Cancelled and re-scheduled flights cost the airline millions a day in revenues and penalties, and will ultimately damage BA’s reputation in all its markets. Walsh says there’re no plans for management to negotiate with the union at all, which is likely to intensify hostilities. Now it’s a matter of who blinks first.