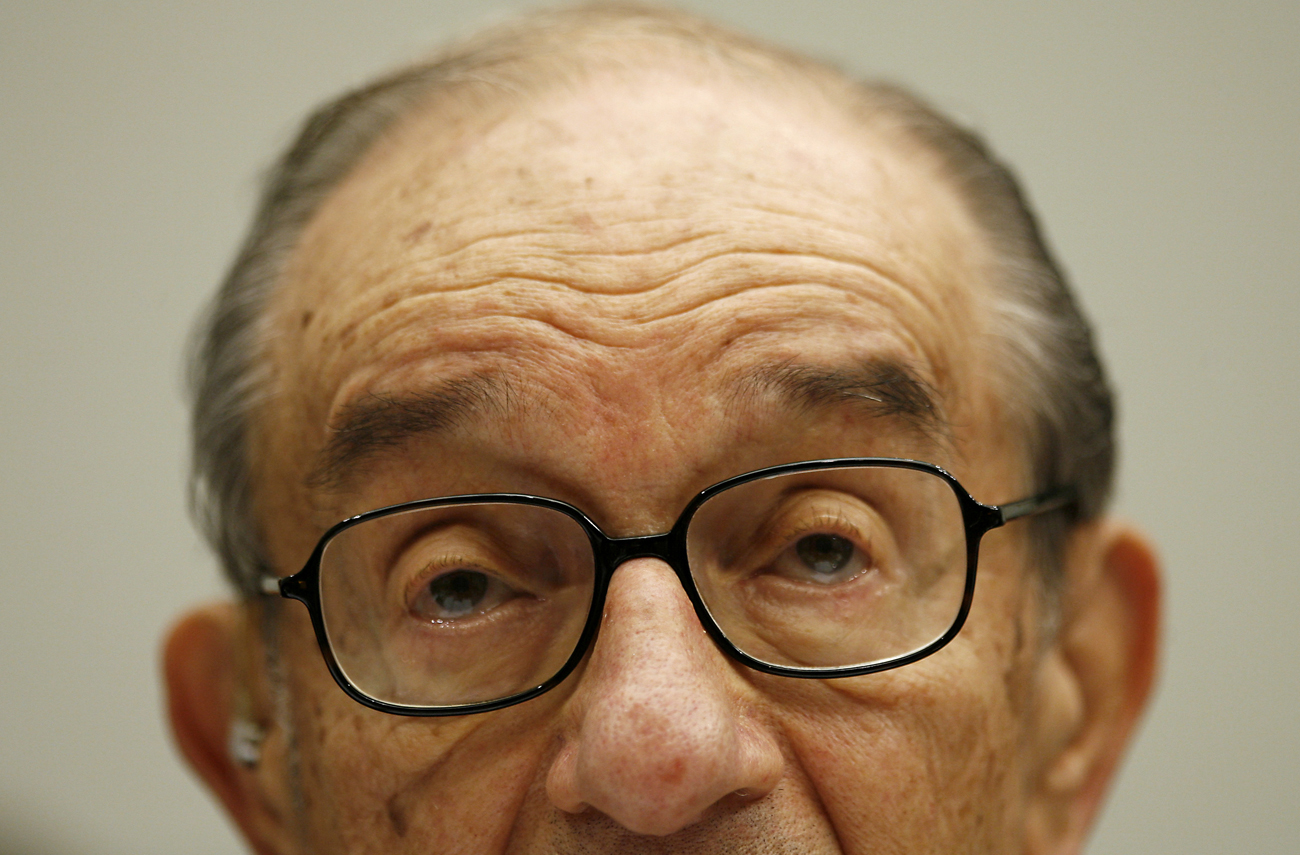 The eighty-four year old former Federal Reserve chairman, Alan Greenspan, is a great believer in markets and their need to be free, despite their sometime propensity to be over-exuberant. But now he might be having some second thoughts. Despite being a critic of so-called big government, he’s now suggesting that perhaps US regulators could rein in massive financial institutions by requiring them to hold more in capital reserves. This comes after Wall Street crashed in October 2008, and took the rest of the world with it. Giant assurer American International Group took some $180 billion in public bailouts, with more in hidden costs. That infuriated the American people, and many now accuse Greenspan, once the darling of US economic policy, of failing to avert the credit bubble that nearly brought the house down. So, he’s now issued a 48-page report, both analytical and somewhat apologetic, calling for banking regulation that enforces collateral and capital requirements, and limits or bans certain kinds of bank lending. One guesses wisdom has come with the golden years. Photo: Reuters.

Germans do about-face over IMF help for Greece

Germany’s backtracked on supporting a European rescue for cash-strapped Greece, and now says help should come from the International Monetary Fund rather than the EU. That’s a complete turnaround from the view that IMF backing would embarrass Eurozone countries, and leave them open to accusations that they can’t manage their own members. Greek Prime Minister George Papandreou says Greece needs to be able to borrow money on reasonable terms to pay down some $410 billion in debt. But the market has punished the country with higher interest rates on sovereign borrowings, because its annual budget deficit is hovering at three times the allowed EU limit. Papandreou has said Greece would turn to the IMF as a last resort, but was hoping that his European partners would ride to the rescue. But the EU hasn’t been able to agree on a specific plan to assist Greece, other than France and Germany indicating they might buy some $40 billion of the country’s bonds. The Greek government has announced a stringent package of budget cuts, but says at current borrowing rates, it won’t meet its targets.

Goldman Sachs chief economist Jim O’Neill says China’s yuan currency will in future become a global reserve currency rivalling the dollar and euro. He posits the Chinese will eventually allow the yuan to float freely on the world’s foreign-exchange markets, pulling other large emerging economies in the same direction. His views are expressed in a report published for Chatham House, a London-based foreign affairs research institute. That sounds pretty good from the point of view of encouraging global democratic capitalism. A free-floating yuan might truly encourage a “third way” in domestic and world affairs as envisaged by Tony Blair and Bill Clinton, and as evidenced by the desired bi-partisanship of Barack Obama. Naysayers fear China will become too powerful in the global future, but that’s going to happen anyway, so it’s best to get everything out in the open and push hard for greater democracy there. Reports indicate China will likely overtake Japan as the world’s second-largest economy this year, and that countries such as Brazil, Russia and India will grow exponentially in the coming 10 years. A free yuan would encourage other freedoms, and that serves everyone best.

Toyota claws back another bit of its reputation

US federal safety regulators investigating a crash of a 2005 model Toyota Prius say the car’s computer showed no evidence of braking by the driver at the time of the accident. To cut a long story short, the finding raises the possibility that the car accelerated because the driver mistakenly pressed the accelerator instead of the brake. It’s not clear if the woman pressed the brake at any time after the car took off, and then took her foot off the brake just before the crash, as the captured data only indicates what happened after the air bags deployed. And that showed the throttle was fully-open. Toyota’s trying to cast doubt on similar accounts, to obviate the possible success of a slew of lawsuits against it. Little more than a week ago, the Japanese car maker discounted the account of a California man who said his 2008 Prius took him on a wild, high-speed ride. Toyota said evidence obtained from the car showed the brakes, though severely worn, would have been capable of stopping the car.

Bloomberg reports that one of Vietnam’s richest men, property developer Dang Thanh Tam, wants Chinese companies to populate his industrial parks on the back of promised cheaper labour costs. He’s already lured Japanese high-tech manufacturers Canon and Sanyo, but now that Vietnam has begun to export higher-value goods to the US, some global technology companies are shifting some production from China. Vietnam already competes with the Chinese in exporting footwear, garments and furniture. But with US and EU pressure for China to strengthen its yuan currency, production costs in China are becoming more expensive. Tam’s Kinh Bac City Development Share Holding Corporation, operates industrial zones in the north of the country, where some of Vietnam’s biggest ports are situated. The Japanese already regard northern Vietnam as an extension of China’s economy, and are looking to diversify production in Vietnam, rather than moving altogether from China.