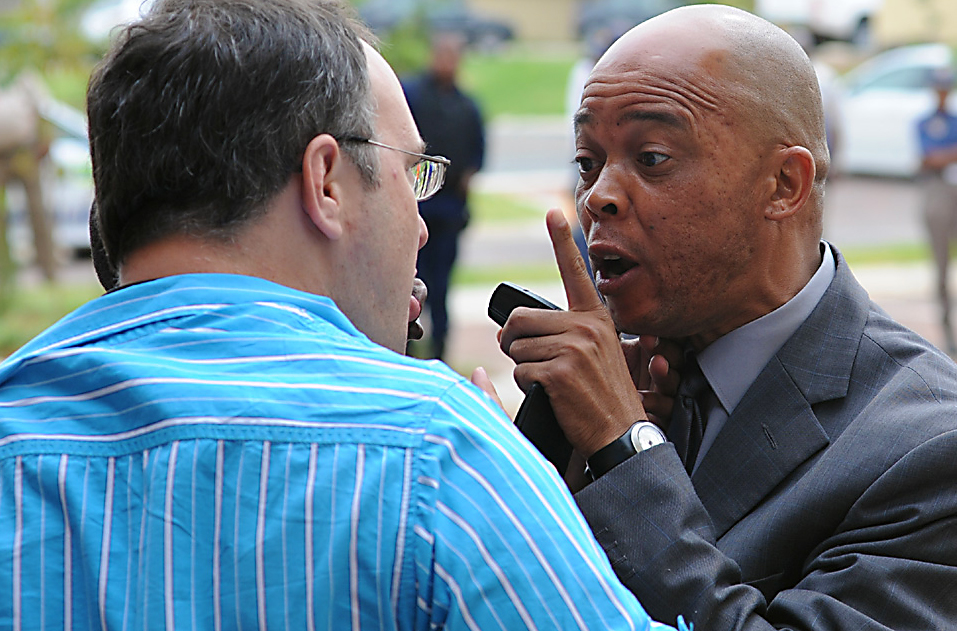 We've seen the brutality of the bodyguards of the rich and mighty way too many times already. These walking suspenders of South Africa’s Constitution seem impervious to public outrage, above the law, violent, angry and arrogant. This is our reporter's personal story about his brush with the untouchables.

It’s a terrible sight. To see your colleague, the guy you’ve bonded with, your mate, your brother in journalistic arms, kicking and screaming and shouting for help. He’s being held back, five large black-suited men surrounding him, shouting at him, ignoring the legal definition of assault and simply not giving a rat’s arse.

You do what any other person would do, you hit “Record”, and you run in to help. To no avail. It’s the most frustrating thing for a man. You can push and pull, you’re using everything you’ve ever thought of, including your brain. You’re shouting, “Why can’t we just talk about this”, in the back of your mind is that guy in Cape Town who just disappeared for 24 hours. And they just look at you and squeeze harder.

It’s humiliating. It’s embarrassing. There’s something about knowing the other side is stronger than you, more violent, they’ll do things you never would and it’s sickening to know they will get away with it.

This was my Tuesday morning. More importantly, it was Tshepo Lesole’s Tuesday morning. He’s an online reporter for Eyewitness News. In other words, he does the multimedia stuff for the EWN site. He’s a young guy, but tough as nails. And he wasn’t expecting what happened on Tuesday.

The media were invited (yes, invited) to watch the latest round of the Zuma comeback tour. It was at Chris Hani Baragwanath hospital, just south of Johannesburg central. There were the usual people waiting around outside, hoping for a glimpse of “the man”. It’s all good political stuff. We, the media, including Tshepo and me, had been herded into the arrivals area. There were about 40 of us, perhaps 10 photographers, maybe four television cameras, microphones all over the place. A little later than scheduled, the Zuma convoy arrived. It’s a sleek fleet of black BMWs, probably the largest collection in the country. It gleams, it shines. We’re not great lovers of bling, but it makes a great visual image. With all the cameras ready, Zuma got out, shook hands with Gauteng premier Nomvula Mokonyane and moved inside. We followed. About a minute later, we were ordered outside again. We obeyed.

Now, if you’re a photographer, and the President is inside, and there’s a fleet of shiny BMW’s outside, what would you do? For the record, I asked Tshepo to get a wide-angle shot, he moved a little out, past the main throng, so he could get a clear shot of all of them. By now, the beamers were parked in a smart line. Off he went. He came back, and we were heading inside when it happened.

It was one of the security men at first, shouting at him, suddenly there were many more. Tshepho was stuck in the middle, writhing. You have to hand it to these guys, they’re pretty well-trained. In some aspects at least. They grab your wrists, you see. It’s very difficult to shake them off if there are two of them. They take your wrists, and they shout. They engage their testosterone; they switch off everything else. I know this, because they simply won’t listen. They change mode. It’s really quite surreal, the mist comes down and the lights go out.

I’ve seen it before. It was at an ANC event at Esselen Park. I’d taken a picture on my cellphone of a VIP car that appeared to have mysteriously lost its number plates. It was also two or three big men, holding me, shouting and screaming. But that time I was lucky. Carl Niehaus emerged from a door, took one look, tapped the main guard on the shoulder and said, “Please go inside, my comrade”. To my eternal surprise, he did. Niehaus held out his hand, and said, “Oh Stephen, I’m sorry about that, please accept my apology”. And that was that. When I saw the guard about an hour later, he wasn’t even rude.

This time was different.

The main image I have is of Tshepo trying to wriggle his way out, I was still a little away from him at this point, and he was screaming. He told me what he said was, “I’m just working here”. I believe him because he’s letting us play it on the radio this morning. Then they upped the ante, shouting louder, and pulling him away from everyone else. By this point, I was pulling in the opposite direction. On my tape you can hear it clearly, I’m shouting, “Why are you pulling him? Leave him alone. Let’s just talk about this.”

The response is so childish not even Julius Malema could have thought of it. It was this, “He’s insulted us”. This is because Tshepo, like anyone who’s suddenly twisted and turned by a group of bigger, stronger men, had let slip a rude word. It’s as if someone went up to you and pushed you and, when you responded verbally, to be told you shouldn’t have said that. In the end (2 min and 34 sec later) Tshepo was dragged around a corner. I was still with him, and by this time the head of the detachment was there. He and his colleagues were refusing to talk to me, saying that they would only talk to him. I said that was ridiculous; he was my colleague. Once around the corner, he gave in. I really can’t blame him. He deleted the pictures.

Tshepo was censored yesterday. He was told by some guy who knows nothing about rights, about freedoms, who knows everything about simply just getting away with it, that he cannot tell the world what he wants to. He was placed in a position where some guy who was missing his jackboot and swagger stick decided what you and I will see on our site. He was the gatekeeper, for that moment, the webmaster. He, elected by nobody, took it upon himself, because he knows, as we all do, that nothing will ever happen to him. He did it because he is physically stronger than Tshepo and me. That’s all. It’s the strongest kid in the class running things. Worse. It is “might is right”. It is “all the times bad things have happened in history”. It is “only the strong rule”. We all know how it ends when that starts to happen. When people are only judged on how strong they are, and how far they’ll go. He was prepared to hit Tshepo, to hit me. He was prepared, and threatened to, destroy or confiscate Tshepo’s equipment.

His only argument was that they don’t want people to know the number plates of the unit’s cars. And this is where they reach the lowest intellectual level of this entire scene. It’s this. The President arrived in a car with the number plate that is so obvious that everyone with IQ higher than 50 will know it’s him. Isn’t that the stupidest thing you’ve ever heard? Wow, isn’t that just a terrible, terrible security risk. Of course, it was the very car that Zuma got out of in front of the cameras, invited for the express purpose of taking pictures of him.

And, if you missed it before: We had been invited.

It’s tempting to say that none of this really matters. But if Tshepo hadn’t given in, where would they have stopped? Would they have beaten him? Broken a limb, tortured him? And would anything have happened then? Have you ever heard of anything happening to a VIP Unit member?

This is serious. We have a group of guys running around the country. They are quite literally armed and dangerous. They have carte blanche to do anything to Tshepo, to me, to you.

This is how dictatorships start. We need to stop them.