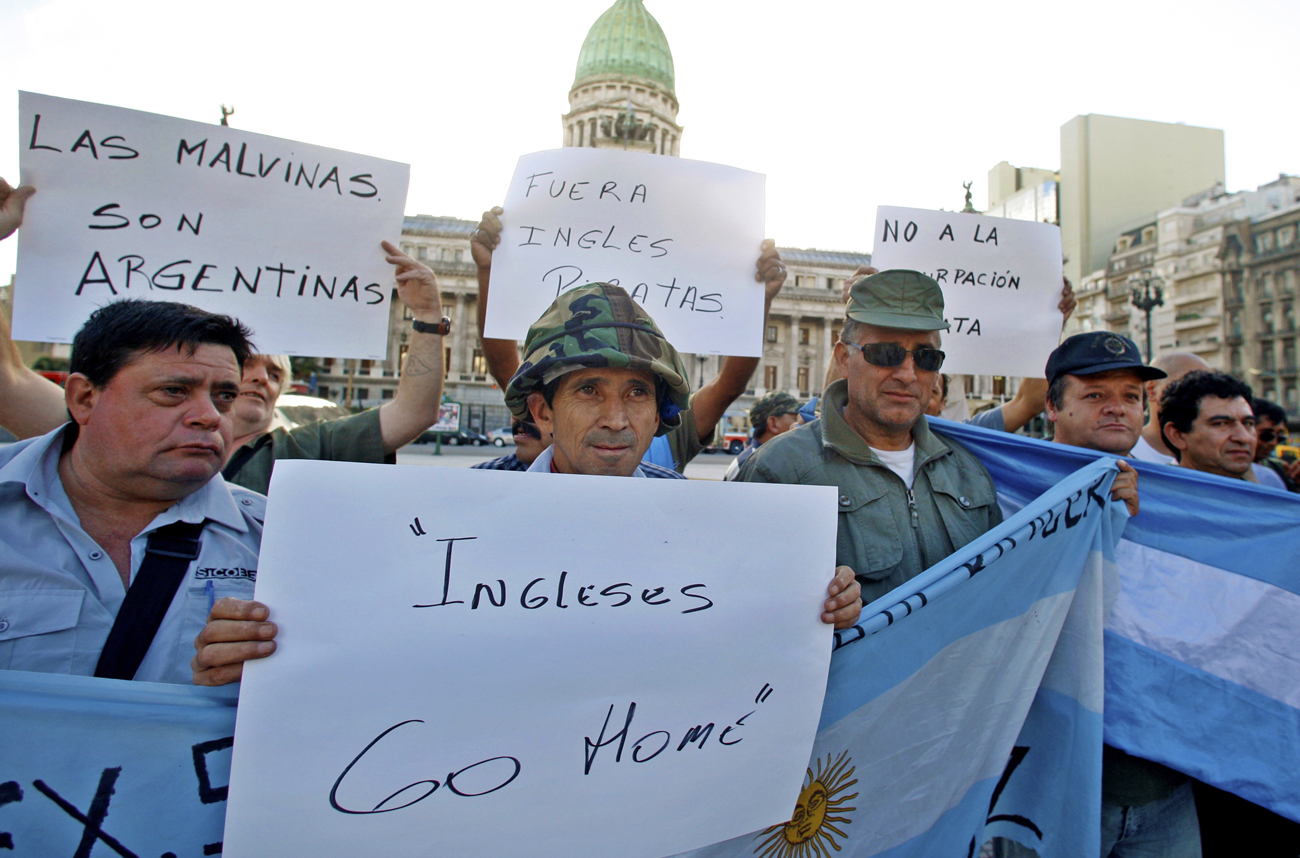 Where there’s oil, there’s trouble. So, Argentina formally asked UN Secretary General Ban Ki-moon to help stop unilateral drilling by the UK on the seabed off the Falkland Islands. They would’ve used the term Las Malvinas when approaching Ban, having invaded the islands they claim as their own in 1982. Maggie Thatcher walloped them, and now the Brits say the islanders have a legitimate right to develop an oil industry within their waters, under UK sovereignty that’s underpinned by the principle of self-determination as set out by the UN. It’s taken nearly 30 years to get to this point (actually the spat goes back centuries), so don’t expect a rapid solution to an intractable problem. The Argentinians are requesting that Ban press Britain to at least open talks about the dispute. But the warring parties don’t speak the same language, and observers say that with elections due next year, the Argentinian government will be in all sorts of trouble with voters if oil is found in large quantities.

Photo: A former Argentine soldier holds a sign that reads “Britons go home” during a demonstration in front of the Congress building, to protest against to oil exploration off the disputed Falklands Islands, in Buenos Aires February 24, 2010. Britain rejected Argentine objections to oil exploration off the Falkland Islands on Tuesday, saying the drilling was within international law. REUTERS/Enrique Marcarian

The US will stick to record low interest rates for now, to ensure that the economic recovery lasts, and helps put Americans back to work. But Federal Reserve boss Ben Bernanke told Congress the outlook was for moderate growth in gross domestic product, and this will only slowly dent the nation’s near 10% unemployment. Bernanke kept his cards close to his chest, avoiding telling lawmakers when interest rates might be raised. Many observers think this might be months away, but the Fed chairman concluded rates will need to stay at exceptionally low levels for an extended period of time. The latest data out of the US shows new home sales fell to a record low in January. So, the world’s largest economy is still peering through the gloom, despite Wall Street banks popping the champagne corks again as they awarded themselves huge bonuses.

Israeli spy spills beans in memoir about his Hamas brothers

It’s got the bite of a John le Carre novel. Who would have thought that the son of one of Hamas’ founders was a top spy for Israel for more than 10 years? But it’s true, according to a new memoir by Mosab Yousef’s called Son of Hamas. The book’s being published in the US, with the publisher’s blurb promising a gripping account of terror, betrayal, political intrigue, and unthinkable choices. The release of Yousef’s tell-all comes as Dubai is trying to shed light on the assassination of a top Hamas commander last month in one of the emirate’s fancy hotel rooms. They say Israel conducted the hit, and there’re reports a Hamas insider assisted the killers. Yousef’s father, Sheik Hassan Yousef, was a founder of the Palestine militant group in the 1980s and still holds a senior position in the body. He issued a statement saying his son was blackmailed by Israeli security services during a stint in jail in 1996. Yousef’s reports from Gaza are said to have led to the arrests of several high-ranking Palestinian militants. Ironically, he converted to Christianity and moved to California in 2007. His Dad is currently serving a six-year sentence in an Israeli prison for his political activities. Yousef will now spend even more time looking over his shoulder. Beat that, le Carre.

Dubai police are now looking for about 26 suspects in the killing of Hamas military commander Mahmoud al-Mabhouh in a hotel room in the emirate. They’ve added 15 names to their list, including those who held British, Irish, Australian, and French passports, in a case that’s opened a can of worms over identity theft that Dubai authorities blame on Israel’s Mossad spy agency. The police reckon the assassination squad used identities stolen from men and women with dual nationality who live in Israel, and travelled to Dubai in 2009. Some of the governments involved have now summoned Israeli ambassadors to explain why their security services might be travelling under false pretences. The answers seem obvious.

Few people believed art curator Dirk Hannema when he claimed to have seven Vermeers in his collection, Van Goghs and a few Rembrandts. But 25 years after his death the windmill has turned, and one 1886 work by Vincent van Gogh called “Le Blute-Fin Mill” is now displayed in a small museum in the Dutch town of Zwolle. Experts at the Van Gogh Museum in Amsterdam say the painting was unusual for the 19th century impressionist, as it shows large human figures in a landscape. But it’s also typical of Van Gogh’s rough, bright colours. So in the opinion of the art-world, the work adds to his “oeuvre,” because of its various unique characteristics. What’s special is it’s the first Van Gogh painting to be authenticated since 1995. Hannema bought the painting from an art dealer in Paris in 1975, who was unaware of its value, and immediately insured it for 16 times what he paid.