From our vault: The Karoo Chronicles I - The Moon is a...

From our vault: The Karoo Chronicles I – The Moon is a Baboon 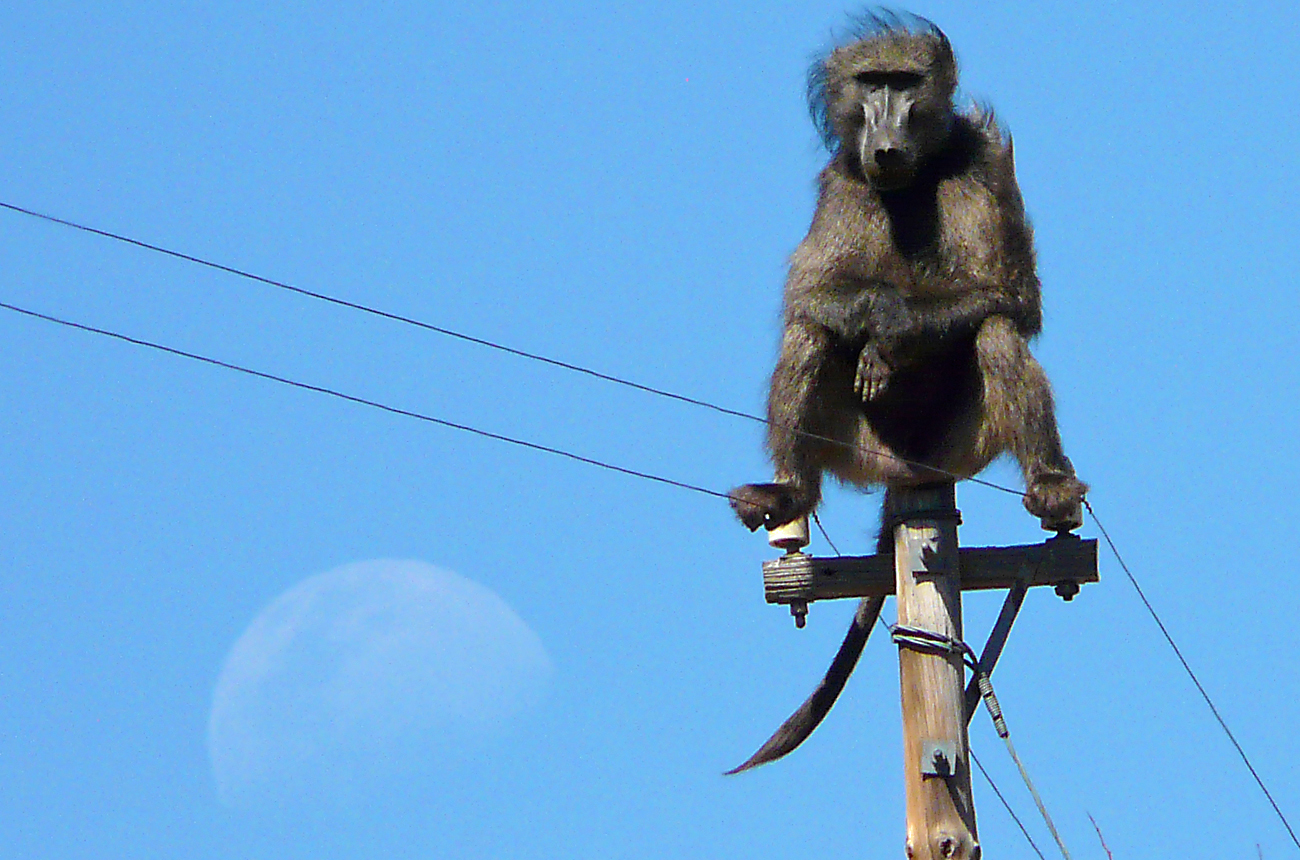 Animals. They are like humans, only more complicated. Ever since my wife and I moved from Johannesburg to the Karoo, our relationship with animals has changed. In the city, animals are akin to toys. In the wild, it sometimes seems as if we are their playthings. By TIM COHEN.

It’s something like the relationship between teenagers and an adult. Teenagers know that adults are perhaps somewhat necessary, and there are times when they need to be respected, they could even be useful and they are quite possibly more intelligent.

But that doesn’t matter, because the simple fact is that they are from a different planet. The essence of the relationship is that they will try to make you do things, while you try not to do them.

Living in the country is to forge a new relationship with animals, even the ones you like to think of as your domesticated pets.

Conversations that used to be filled with the antics of humans, such as crime, politics and the latest moves by the government suddenly become substituted by stories of snakes, birds, buck and baboons.

And everyone has a story to tell. Mention snakes, and serpentine stories come sliding out of their hiding places in people’s minds, just as one housebreaking story leads to another within city chatter.

As it happens, I did actually meet a snake on our small farm in the Karoo, sometime ago while visiting from Johannesburg. I was collecting rocks for a fire of the type I recalled so fondly from Camel adverts. I spotted a very large suitable flat rock, and lifted it only to reveal a coiled puffadder, perhaps the most deadly of the snakes in our area.

We both blinked at each other in the way that you do even before surprise sets in, which typically happens a moment before panic sets in.

I was not in the best situation to act on my natural inclination which would have been to run like mad, holding as I was, an extremely large rock. So instead of moving, I was transfixed; as was the puffadder.

In that frozen moment, an odd form of communication seems to have taken place. I agreed that I had in fact been out of line, removing, without prior authorisation, the roof off the puffadder’s house. We reached a quick agreement that we weren’t going to be friends, partly because of this irritation, but also because, well, he just didn’t like the look of me.

So we nodded at each other with brisk formality, the way gunfighters eye each other at the bar, and silently agreed that was not the day for a brisk walk out back.

I backed away, slowly, remaining facing the snake, which apparently is the accepted etiquette when it comes to human/snake relations. Then I ran like mad and had my moment of heart-thumping panic.

Yet in the Karoo, snakes are a rarity. The land is not verdant enough to supply snakes with much of a living, as it is in KZN where snakes are a weekly occurrence and a significant part of popular tales, even spirituality. The animals common in the Karoo are baboons, for reasons that are not clear to me. They are, however, something between a terror and a pest.

The cottage we built on our farm included, for reasons that I now see as slightly silly, gutters. Gutters are things built by people who live in areas where occasionally a wet substance known colloquially as “rain” comes, bizarrely and amazingly, out of the sky. This happens extremely rarely here, making gutters in the Karoo something of an affectation.

The gutters on our cottage were not, as it turns out, made for the purpose of guiding rain down from the roof. They were installed to give the baboons a place to grip as they launched themselves onto our rooftops.

Unfortunately, since they weren’t particularly well installed, the baboons constantly dislodged the gutters, until I finally gave up and took them off the cottage.

Ever since then we have taken to swearing at baboons whenever we pass them on the road. If you are in the Karoo, and someone opens a window and shouts “Hoodlum!”, it is us, and the insult is not directed at you. It’s directed at the baboon behind you who is just about to grab your ham-and-cheese sandwich.

Such is our distaste for baboons that one morning after we’d moved into our house before Christmas, I saw a troop of baboons coming over the ridge near our house. So I did what any sensible, mature adult person would do. I went outside, dropped my pants and mooned them.

Childish I know, but incredibly satisfying. I thought; me and these baboons, we are developing an understanding, as they looked at me askance and scuttled back over the ridge.

It made me feel better until a few weeks later when we had left the house to work on our cottage a little way down the road, and the baboons invaded our house.

Our city cats were amazed and appalled, and it must be said, traumatised. They scattered into the bush while the baboons rampaged through the house.

They scattered food, upset furniture and left their delightful little lumps of what we country folk lovingly call “spoor” all over the place. They made a terrible mess and it was late at night before the cats felt it was safe to return and we got the place back to normal.

Their curiosity would be delightful and interesting from an anthropological point of view if our vegetables weren’t the subject of their attentions. Almost every edible thing had a bite, sometimes just a single bite, taken out of it.

The baboon invasion was slightly frightening and otherworldly. My brother suggested I might get a get one of those new guns that shoots a capsule of hot pepper, because then it would hurt for weeks.

I said I thought this was a very good idea, but actually, I was thinking I might try using lead as the basis for a projectile, because that would definitely hurt for weeks.

Photo: The view from our bedroom window. Worth putting up with the baboons? We think so.

Gradually, however, I calmed down. Living in the country is to share your space, and you have to get used to that. The careful and distinct demarcations that city life dictates hold no sway here.

Kudu breeze over high fences, jackal laugh at the moon at dusk and snakes lie under rocks without the least concern for the jurisdiction laid down in a dusty corner of a hard-drive in some council building. Mostly the relationship is benign, and in some ways, rooted in a healthier notion of the world. Other times it’s adversarial, and it can be tragic. But it is what it is. There is not changing it.

Besides, there was another sneaking little reason I was feeling phlegmatic. When I took my shower the morning after the baboon attack, the soap felt a bit funny.

I looked down and there was a truly wonderful sight. A corner of the soap was missing. And incised in the bar were two neat baboon-sized tooth marks. DM

Related: The Karoo Chronicles II: The naming of parts