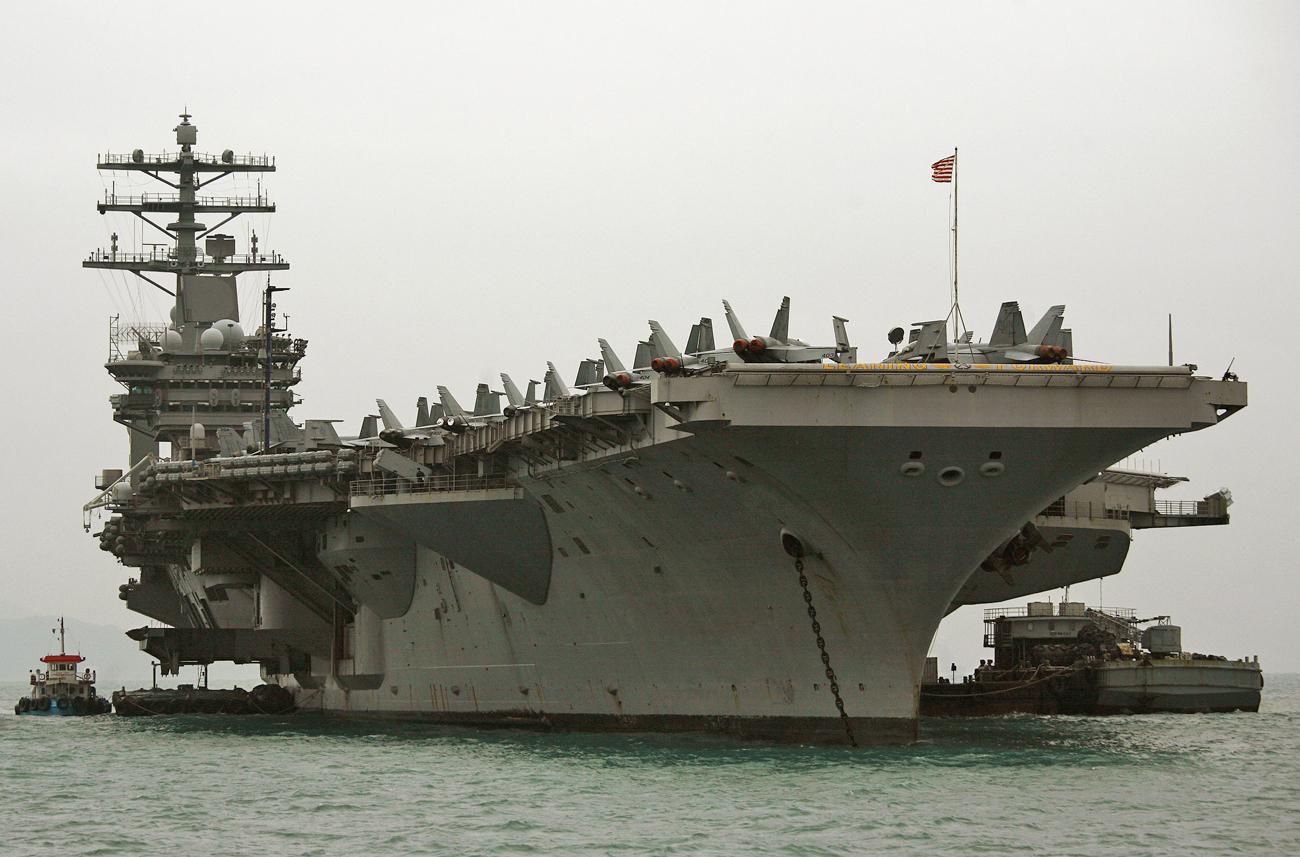 In a show of friendship amid current tensions between China and the US, five American warships made a port-call in Hong Kong. The current animosity stems from a multi-billion dollar arms sale to Taiwan, and Obama’s intention to meet with Tibet’s Dalai Lama. There’s also Google and issues over hacking and censorship, so the 5,000 sailors on a four-day rest stop, will no doubt try to be good ambassadors. Observers say China’s approval of the port call indicates it wants to keep Sino-US relations civil. There’s much at stake, not least the health of the global economy. But things have changed since the British left the former colony in 1997. China blocked a port call by a US naval vessel in 2007, which some saw as retaliation for the US Congress awarding the nation’s highest civilian honour to the Dalai Lama.

Nicolas Sarkozy’s visit to Haiti, the first ever by a French president, has recalled memories of the island nation’s bitter experience of independence war in 1804. Back then, one-third of the population was killed in an uprising against a very brutal form of slavery, and the masters of rich colonial France demanded huge reparations in the form of gold from the world’s first black republic. That debt has never been forgotten, and the French have much to answer for. But the country has always been plagued by natural disasters, and was brutally and corruptly managed after independence, and that is something only Haitians can resolve. Ousted President Jean-Bertrand Aristide in 2004 said Paris needs to pay its own reparations, and Sarkozy’s visit may pave the way for some mutual understanding on the issue, after he pledged some $370 million in aid. The French now say Sarkozy will announce a plan for the reconstruction of Haiti, that dovetails with that of the Haitians, the US, and UN.

Politics watchers in the US see evidence of greater than ever polarisation in the dual-party system. It appears the moderate middle ground is giving way in Congress, after pragmatic, bi-partisan politicians such as Senator Evan Bayh leave Washington. What remains is ever-more-polarised peers locked in political gridlock, and that’s what American voters hate. So the politicos better beware, because they might find the public casting them out of office in time to come. Those who take the centre have always been there, but a resurgence of aggressive conservative Republicans locking horns with President Barack Obama at every twist and turn, has made that middle ground an even lonelier place to be. The moderates tend to make deals and resolve critical policy standoffs. But partisan enmity now seems to be the order of the day, despite Obama’s efforts to institute a truly bi-partisan presidency. The filibusterers should fear the voice of the people.

The capture of the Taliban’s second-in-command in a joint CIA and Pakistani security effort may be critical to the successful prosecution of the Afghan war. But not so much because it denies leadership of the Taliban and al-Qaeda, but rather because it shows that Pakistani security services are finally, properly ready to deny militant leaders a safe haven. That’s not always been the case in the complex politics of the region, and this has made the task of Nato allies much harder. So, the arrest of Mullah Abdul Ghani Baradar in the Pakistani commercial city of Karachi, may force other insurgent leaders sheltering in Pakistan to talk with the Afghan government. The Taliban’s leadership council is believed to be based in Pakistan; but as the public opinion has turned after spate of bombings and murders by radical Islamist groups in Pakistan itself, it became difficult for elements of Pakistan’s security forces to aid and abet the them.

Toyota has conducted a national mea culpa in Japan, in very public Japanese fashion. The world’s largest car maker took full-page ads in major Japanese newspapers, apologising from the “bottom of its heart” to the nation for its woes over defects in its vehicles. Company President Akio Toyoda, the grandson of the group’s founder, is scheduled to update the public in a statement from the firm’s Tokyo headquarters, after the manufacturer recalled nearly 9 million vehicles globally. Toyota’s advertisements focus on the recalls in Japan, which affect the Prius gas-electric hybrid and two other hybrid models, including the upmarket Lexus. Toyota published similar ads in US papers as well, saying vehicle owners must take their cars to Toyota and Lexus dealers nationwide. The apology comes from deep within Japanese culture, although not everybody agrees it’s sincere.

Muslim and Jewish students are at loggerheads on the University of California, Irvine campus near Los Angeles, and the ructions cut to the heart of America’s First Amendment right to free speech. The New York-based Zionist Organization of America wants Chancellor Michael Drake to apologise for not condemning what it says is anti-Semitic speech on campus by the university’s Muslim Student Union. It says it’s not asking anyone to infringe on anyone else’s right to free speech, but that Drake has chosen to stay quiet on the matter, rather than condemn the Muslim students’ speech as hurtful and anti-Semitic. Drake continues to stay mum after 11 Muslim students were arrested by campus police for barracking during a talk by Israeli Ambassador Michael Oren. Some of the arrested students were from a different UC campus, which also brings up issues of jurisdiction in the US way of thinking. The Muslim students say they have a right to protest. Indeed they do, but being a place of higher learning, the Israeli ambassador has every right to be there, too.

Researchers say a lack of the right light each morning to reset the body’s natural sleep-clock may play a role in teenagers’ sleep problems. Teens should get about nine hours of sleep a night, but many can’t fall asleep until late and struggle to wake-up for early classes. Hormonal changes and social demands help fuel the problem, so a North Carolina school built lots of skylights in classrooms that made them brighter than usual indoor environments, and changed a specific wavelength of light. Some students then wore special goggles that blocked short-wavelength light for five days. This delayed by 30 minutes their evening surge of melatonin, a hormone that helps induce sleep. The researchers say teens who spend their days in light-challenged schools probably suffer the same effect, as daylight is the best source of those short-wavelengths. It’s just preliminary research, but shows that many people live and work in “sick” buildings. So, everybody should get outside more.