Plagiarism in the internet age: is there any room for d...

Plagiarism in the internet age: is there any room for debate? 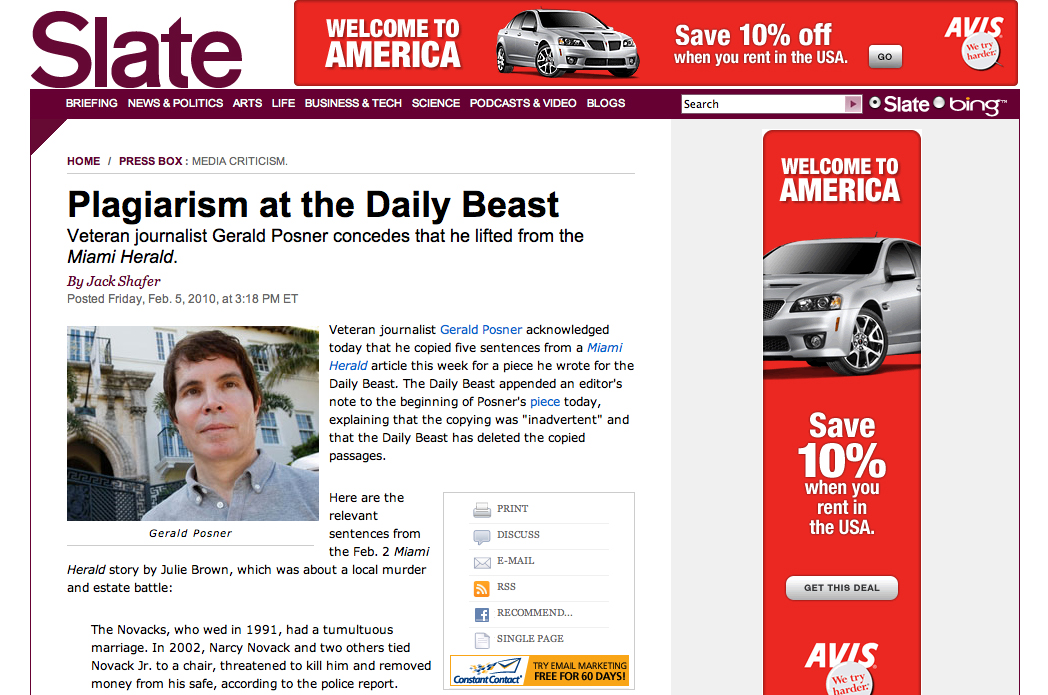 Two high-profile cases of plagiarism have hit the US media since the beginning of February. Jack Shafer of Slate is once again the moral voice at the centre of the controversy, but is it really as simple as he makes out?

The synonyms for “plagiarism” in the Encarta World English Dictionary spell it out plainly enough: “copying,” “lifting,” “stealing,” “illegal use,” “breach of copyright”. For a writer or journalist, these are some of the most loaded and emotionally fraught words in the lexicon. They can mean the end of a career for someone habitually caught in the act, and – at best – a really bad week for someone whose work has been appropriated. In the Internet age, where turnaround times are narrowing almost as fast as readers’ attention spans, plagiarism seems to be on the up – either (thanks to Google) way more journalists are doing it, or (thanks to Google) way more journalists are getting caught.

In the last ten days, two major plagiarism stories have broken in the US media. The latest one, published on the Huffington Post on Sunday night, involves New York Times reporter Zachery Kouwe, who – according to en editor’s note issued by his newspaper – “reused language from The Wall Street Journal, Reuters and other sources without attribution or acknowledgment.”

When the Huffington Post provided examples of the sentences Krouwe had “reused,” it became clear the New York Times was being polite – this was out-and-out stealing. To be fair to the newspaper, though, the story is still brand-new and more facts need to be established. Also, the Times made the following contrite statement in their editor’s note:

“Copying language directly from other news organizations without providing attribution – even if the facts are independently verified – is a serious violation of Times policy and basic journalistic standards. It should not have occurred.”

The Times apology comes in the wake of what is fast turning into the “Gerald Posner scandal,” a deepening case of consistent plagiarism involving the chief investigative reporter at The Daily Beast. On Friday 5 February, Jack Shafer, a leading media commentator for Slate, revealed that Posner had been copying sentences from the Miami Herald. Initially, the Beast’s response was to take out the offending sentences and explain that Posner’s error had been “inadvertent,” but last week, when more instances of plagiarism were uncovered, Posner resigned.

In a resignation letter published to his blog on Wednesday 10 February, Posner was humble and repentant. He accepted full responsibility for his actions, saying he did not want The Daily Beast’s “excellent reputation” to be tarnished by the controversy.

He also wrote this: “I realize how it is that I have inadvertently, but repeatedly, violated my own high standards. The core of my problem was in shifting from that of a book writer – with two years or more on a project – to what I describe as the ‘warp speed of the net.’ For the Beast articles, I created master electronic files, which contained all the information I developed about a topic – that included interviews, scanned documents, published articles, and public information. I often had master files that were 15,000 words, that needed to be cut into a story of 1,000 to 1500 words.”

It was a rejoinder that many observers and comment-posters accepted, even appreciated. Here, for once, was a guy caught red-handed who didn’t try to deny the charges. Instead of hitting back or retreating into silence, he immediately showed remorse. He also provided a context for his actions – the “warp speed” of the Internet, versus the much longer lead times for a book – which on the surface seemed like a reasonable argument, perhaps even symbolic of the very real difficulties facing professional journalists worldwide.

But Shafer was having none of it. He pointed out that since his original article, plagiarised material had been found in five separate Posner articles on The Daily Beast, and that an in-house review had revealed “additional examples”. He consequently had no sympathy for the “warp-speed” defence:

“As one who has been working at the warp speed of the Net since 1996, who routinely gathers Nexis dumps, clipped Web pages, scanned documents, handwritten notebooks, recorded interviews, DVRed news shows, hard-cover books bristling with Post-It notes, and nests of newspaper clippings fit for the incubation of Layson albatross eggs, I don’t buy it. In recent years, I’ve written upward of 120 pieces annually, and my harder-working Slate colleagues – John Dickerson, Christopher Beam, Emily Bazelon, Timothy Noah, William Saletan, Dahlia Lithwick, Farhad Manjoo, et al. – have posted similar or higher numbers while writing on deadline. None of them has plagiarized. Nor have I.”

The big weakness in Shafer’s statement, it seems, is his willingness to vouchsafe the credibility of seven journalists about whose publishing history he cannot possibly know everything. It would be a shame if one of these people were caught out, because that would damage Shafer, a man who’s become America’s most famous slayer of plagiarists. (In 2007, Jack Shafer himself was burnt by the so called Monkey-fishing scandal in which his own writer, Jay Forman, invented an entire story. – Ed). In 2008, he outed a New York Times repeat offender, Alexei Barrionuevo, his last scalp before Posner, and he almost always weighs in for the prosecution when a writer is felled at somebody else’s hand.

Shafer is no doubt a brave journalist. He’s convinced of the sanctity of his prose, and so is prepared to take on the role of moral authority before what must be a legion of enemies. But does he sometimes take this preacher calling too far? Consider what he said in 2006 about Ian McEwan, one of the finest writers in the English language, who in that year had been embroiled in a highly debated (and debatable) case of alleged borrowing regarding passages from the novel Atonement: “As a long-time magazine and newspaper editor, I’d have no trouble firing McEwan for writing as he did if he worked for me.”

The problem, of course, is that if journalists like Shafer always had their way, we wouldn’t have novelists like McEwan.  And yet, without Shafer-led crusades against ever-loosening standards, the New York Times’s Judith Miller would never have been exposed for freely disseminating the Bush administration’s lies about Saddam Hussein’s supposed nuclear programme, and many a PR-writer would have passed as a journalist.

So, yes. To answer the question we posed in our headline, there’s always room for debate. Maybe here it should just be a really, really small room.