Davos, place of doom and gloom

Davos, place of doom and gloom 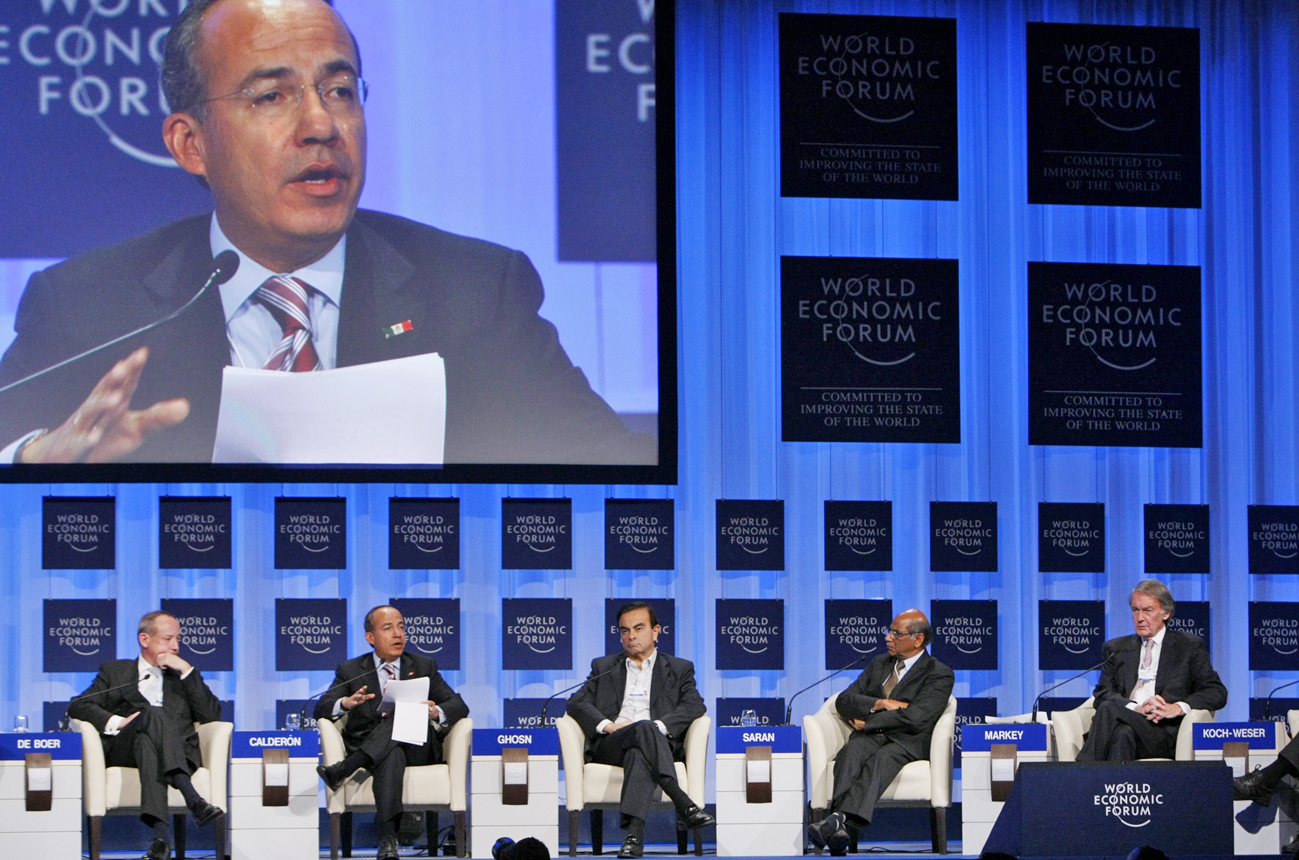 The great gathering's first three days did nothing to improve the mood, as it seems that just about everyone agrees that the future is not looking terribly bright.

After several days of meetings, speeches and seminars, much of the news from the World Economic Forum in Davos has focused on various government proposals to re-regulate financial institutions. French president Sarkozy made a fervent pitch in a speech observers described as eloquent but unclear and Barack Obama’s plans have provided even more kick to this discussion – even if they haven’t been made at Davos.  A banker like Barclays’ Robert Diamond Jr., took a swipe at Barack Obama’s plans while uber-trader George Soros gave Obama’s ideas thumbs up. Now, on Friday, Alistair Darling, UK chancellor of the Exchequer, has been at a back room meeting with British bankers to give them time to air their concerns about these proposed new banking rules.

This gathering has brought together the heads of HSBC, Barclays and Standard Chartered, as well as leaders from a gaggle of American banks like JPMorgan Chase and Morgan Stanley. According to The Times, the meeting is supposed to “achieve a consensus between London-based bankers before presenting the U.K.’s position” in the debate of new regulation.

However, some real heavyweights, such as JPMorgan’s Jamie Dimon and Goldman Sachs’s Lloyd Blankfein, aren’t even at Davos in 2010. Their absence and a relative lack of celeb stars and political heavyweights from Washington has itself become a topic of conversation in Davos. Now another no-show is Brazilian President Luiz Inácio Lula da Silva, who was hospitalized Wednesday with high blood pressure complications as he was about to depart for Davos. Lula was supposed to receive the WEF’s new Global Statesmanship Award.

In recognition of the chastened economic circumstances worldwide, and what was maybe the biggest blow to the overall mood in Davos, there will be no exclusive wine tasting for the masters of the universe. This may mean attendees have to deal with the WEF’s depressing discussions, in a most unpleasant state, stone-cold sober.

That may be a real shame – according to various commentators, an emerging consensus is the US and European economic recoveries may well run out of steam later this year, yielding an extended period of low growth, high unemployment, a big debt overhang on both governments and households, dangerous budget deficits, and a continuing loss of competitiveness (although new US growth for the most recent quarter at 5.8% may give some modest cheer). In contrast to western growth, however, China, India and the rest of Asia may be the only real engines of growth this year. In one sentence, very, very much not good for the western World.

Early on at the summit, for example, economist Nouriel Roubini, the man sometimes referred to as the prince of economic doom and gloom, said that the world, and most especially the US, faces a lengthy, slow recovery that will end with “subpar growth” and the risk of renewed recession. “I feel bearish about the United States [but] I’m also bearish about the eurozone, especially in the periphery…take Greece but the same problems occur in Italy, Spain and Portugal where there’s not just a public debt sustainability problem but there is also a competitiveness problem. They’re losing market share to China and Asia and their wages grew more than their productivity.” (Where does this guy invest his money?)

Not to be outdone on the doom and gloom front, Harvard economist (and former IMF official) Kenneth Rogoff explained the banking crisis has evolved into a long-term debt crisis. Then there was Zhu Min, deputy governor of China’s central bank who admonished his listeners, “You need growth to avoid debt and the real risk for the global economy is very weak growth over time.”  Perhaps the folks in that session were taking really good notes…

Zhu added, “The GDP in the United States in 2010 is likely to be equal to the level of 2007, and this is not a safe world if the US and Europe have 10 percent unemployment rates over time.”

The irrepressible Massachusetts Democratic congressman, Barney Frank, offered, “I am going to go back and try to raise the taxes of most people who attended here” and went on to say things were in a mess globally because “someone decided to get the joint Nobel prize for economics and fiction with the theory that you could finance two wars with five tax cuts.” (With a monologue like that, maybe he should have run for the senate in Massachusetts instead of that other Democratic candidate – whatever her name was.) Photo: Microsoft founder Bill Gates and his wife Melinda declared that the next decade should be ‘the decade of vaccine”. REUTERS/Arnd Wiegmann

Meanwhile, Bill Clinton made his widely anticipated pitch for lots and lots of help for Haiti at a special session that was added to the WEF schedule at the last minute. Clinton said the Haitian people had behaved “magnificently” in the aftermath of the earthquake but then he told his audience, “If anyone knows where I can get some trucks, I need hundred yesterday”. Other panellists such as Irish entrepreneur Denis O’Brien emphasised the potential investment opportunities in a rebuilt Haiti, such as tourism, biofuels and the reconstruction of the capital, Port-au-Prince. There is always an optimist in Davos!

While the South Korean and South African presidents spoke yesterday as well, Clinton on Haiti effectively got informal top billing at the WEF. Speaking as a keynoter, South Korean President Lee Myung-bak said, “The recent financial crisis has reminded us how closely our national economies are integrated in the global economy. It is not only the events in our near neighbours that have an impact on our lives. The degree of integration is now such that we saw how events on the other side of the world can impact our daily lives.”

Then Bill and Melinda Gates got everyone’s attention with an announcement that their foundation will commit US$ 10 billion over the next 10 years to help research, develop and deliver vaccines for the world’s poorest countries. “We must make this the decade of vaccines,” said Bill Gates. Mr and Mrs were joined at their press conference by Julian Lob-Levyt, CEO of the Global Alliance for Vaccines and Immunisation (the GAVI Alliance) – GAVI had been launched at the World Economic Forum 10 years ago this week.

For more, read The Atlantic, the AP, the Washington Post, the BBC here, here, here and here.