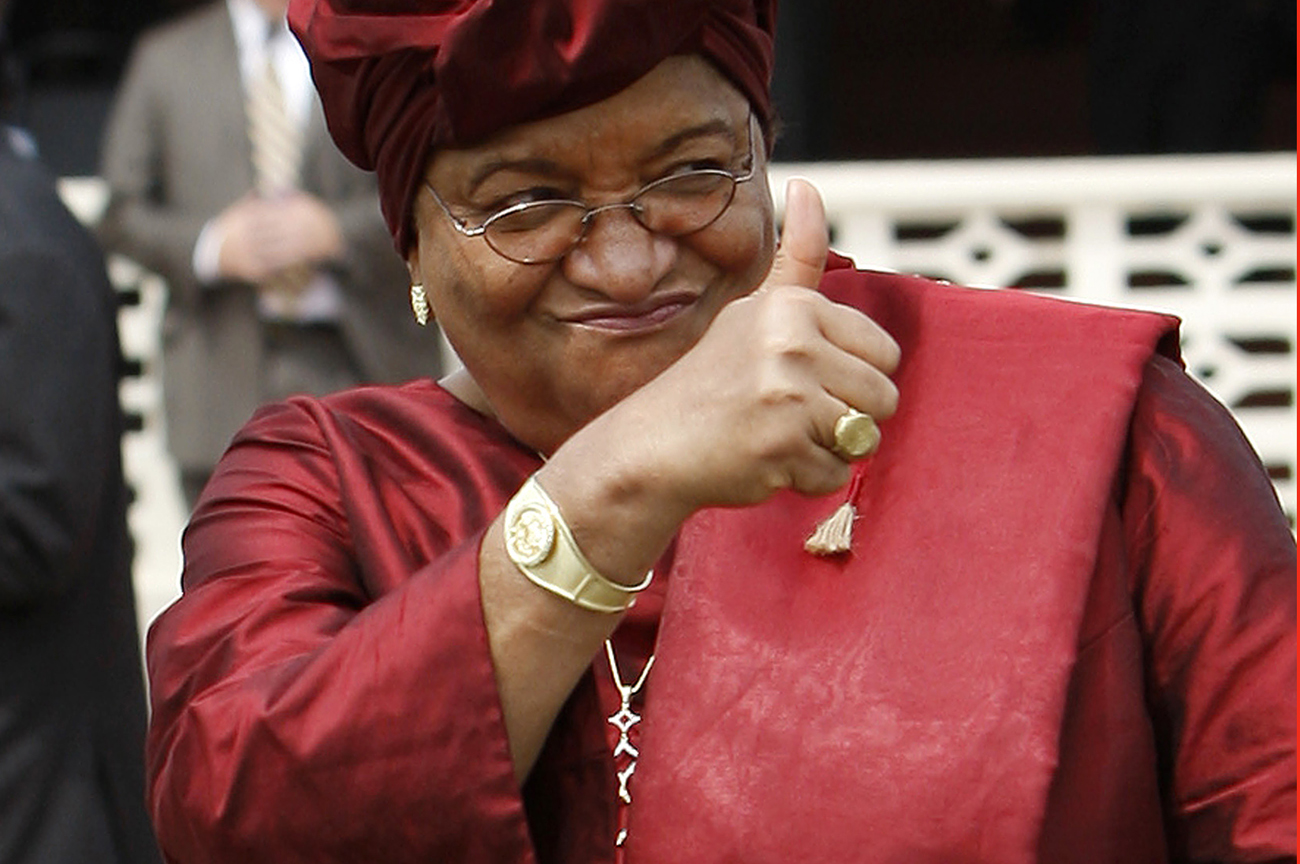 Liberian President Ellen Johnson-Sirleaf says she’ll stand for re-election in 2011, despite the nation’s truth and reconciliation commission proposing a 30-year ban on her taking part in politics after it said she backed a rebellion led by former president Charles Taylor. Taylor’s on trial in The Hague for war crimes including murder, rape, conscripting child soldiers and sexual slavery. Johnson-Sirleaf admits she provided Taylor with money, but says she was misled into supporting him. Since taking office as Africa’s first female president in 2005, Johnson-Sirleaf has won plaudits for her role in rebuilding Liberia, after a 13-year civil war linked to neighbouring Sierra Leone, that ended in 2003, left the nation shattered. Photo: Reuters.

Nigerian army swears to stay out of politics amid rising political, religious tensions

Nigeria’s army chief swears the country’s military will stay out of politics. That’s a good thing to promise, because Nigerians have had military rule many times before and tensions are currently rising over the continued absence of the country’s Muslim President Umaru Yar’Adua, who’s being treated for heart problems in Saudi Arabia. Yar’Adua’s two-month stint in hospital has raised questions about who’s in charge of the country of some 140 million, split pretty evenly between Muslims in the north and Christians in the south. The Nigerians rotate the presidency between Muslims and Christians, precisely to prevent the kind of mayhem that has just occurred in the central city of Jos, where gangs of youths fought pitched battles under opposing religious banners. Lieutenant General Abdulrahman Dambazau, who heads up the army, says it’s committed to the survival of Nigeria’s young democracy. These are heartening words at a time when mischievous politicians and activists are shaking up the peace. A court allowed vice president Goodluck Jonathan to take up power in Yar’Adua’s absence, but this isn’t enough for some, who say the president hasn’t formally handed executive powers over to his deputy.

About 300 people have been arrested over religious clashes in Nigeria’s central city of Jos. This is about the same number that were killed in days of recent violence before troops restored a semblance of order. Reports say half of those arrested have been taken from Jos to the capital, Abuja, for questioning. Jos saw similar violence in 2001 and again in 2008, which killed about 1,200 people in total. Many of the current detainees were also taken into custody late in 2008, meaning authorities believe the violence was sparked by the usual suspects, who were never prosecuted. Hundreds of police are on the streets of Jos to restore law and order, after a 24-hour curfew was relaxed to 12 hours overnight. The violence could be linked to the absence of Nigeria’s Muslim President Umaru Yar’Adua, who’s been eight weeks in a Saudi Arabian hospital being treated for heart problems. Unrest and dissatisfaction have become rife across Nigeria in recent weeks, and observers say people perceive a power vacuum in Yar’Adua’s absence.

Niger Delta militants get restless after promises not met

A coalition of former Nigerian militants who just months ago laid down their arms in return for a presidential amnesty that promised them education and jobs, are back on the warpath, saying that government efforts to reintegrate thousands of ex-rebels are inadequately organised and funded. Nigerian President Umaru Yar’Adua’s popular amnesty brought months of relative calm to the Niger Delta, Nigeria’s main oil-producing region. He further promised a $10 billion stimulus for the local economy, but now people fear this may have been put on the back-burner by the country’s notoriously corrupt bureaucracy after Yar’Adua went to Saudi Arabia some months back to be treated for a heart complaint. A joint revolutionary council representing several former militant commanders is now demanding that government significantly improve education facilities and include oil and gas training programmes, saying that promised training centres don’t exist, and those that do aren’t formally recognised.

Guinea’s new interim prime minister, Jean Marie Dore, who was appointed by the country’s military junta to organise elections to end military rule, has taken office. Guinea has seen little in the way of civilian democracy since former dictator Lansana Conte took control 25 years ago. The current army government staged a coup in December 2008 after Conte died. Dore says his priority is to reform Guinea’s armed forces. The country has been in chaos the past year after troops massacred civilians protesting against junta leader Captain Moussa Dadis Camara’s intention to run for president in 2010 elections. Camara was subsequently shot in the head by one of his own men and is recovering in nearby Burkina Faso. Dore will have his work cut out in a country controlled by the military for decades, but it seems Camara’s stand-in president, General Sekouba Kounate, saw the light, promising to form a transitional government that includes opposition parties and pledging to hold elections within the next six months.

A 74-year-old former Sudanese prime minister, Sadiq al-Mahdi, says he’ll stand against current leader Omar al-Bashir in an April presidential election. This adds a fresh and surprising political dimension to what has become an increasingly fragile prospect for a free and fair poll after the country ended a 22-year civil war in 2005. The promised election has been long-delayed after the former warring north and south of the country entered a power-sharing government dominated by Bashir’s ruling National Congress Party. Mahdi was elected in Sudan’s last multi-party vote in 1986, but was ousted by Bashir in a 1989 coup, so his entry into the presidential race in 2010 has added a new sense of urgency to the elections. He’s already raised the possibility of ending years of violence in Sudan’s western Darfur province, where the US says Arab militias committed genocide against the region’s black African populace. Bashir is wanted by the International Criminal Court in The Hague on charges of war crimes in Darfur. It’s likely that Mahdi’s decision to run in the election will dominate headlines from now on in.

Despite Angola having become Africa’s largest oil producer, the country’s state oil company, Sonangol, has gone offshore, signing contracts with Iraq to develop its 800 million barrel Qayara and 900 million barrel Najmah oilfields. Angola’s experiences in its restive province of Cabinda (the recent killings by separatists of members of Togo’s soccer team and the conflict of its 26-year civil war) should help Sonangol deal with life in Iraq’s violent Nineveh province, where Sunni Islamist insurgents remain active after the US invasion of that country. Sonangol won the fields after Iraq’s second round of bidding for oil contracts in December. The Iraqis want to push up daily oil production to 12 million barrels a day within seven years, compared with a current 2.5 million bpd, enabling them to rebuild the country after decades of war and sanctions. The Angolans should know how to do the job.