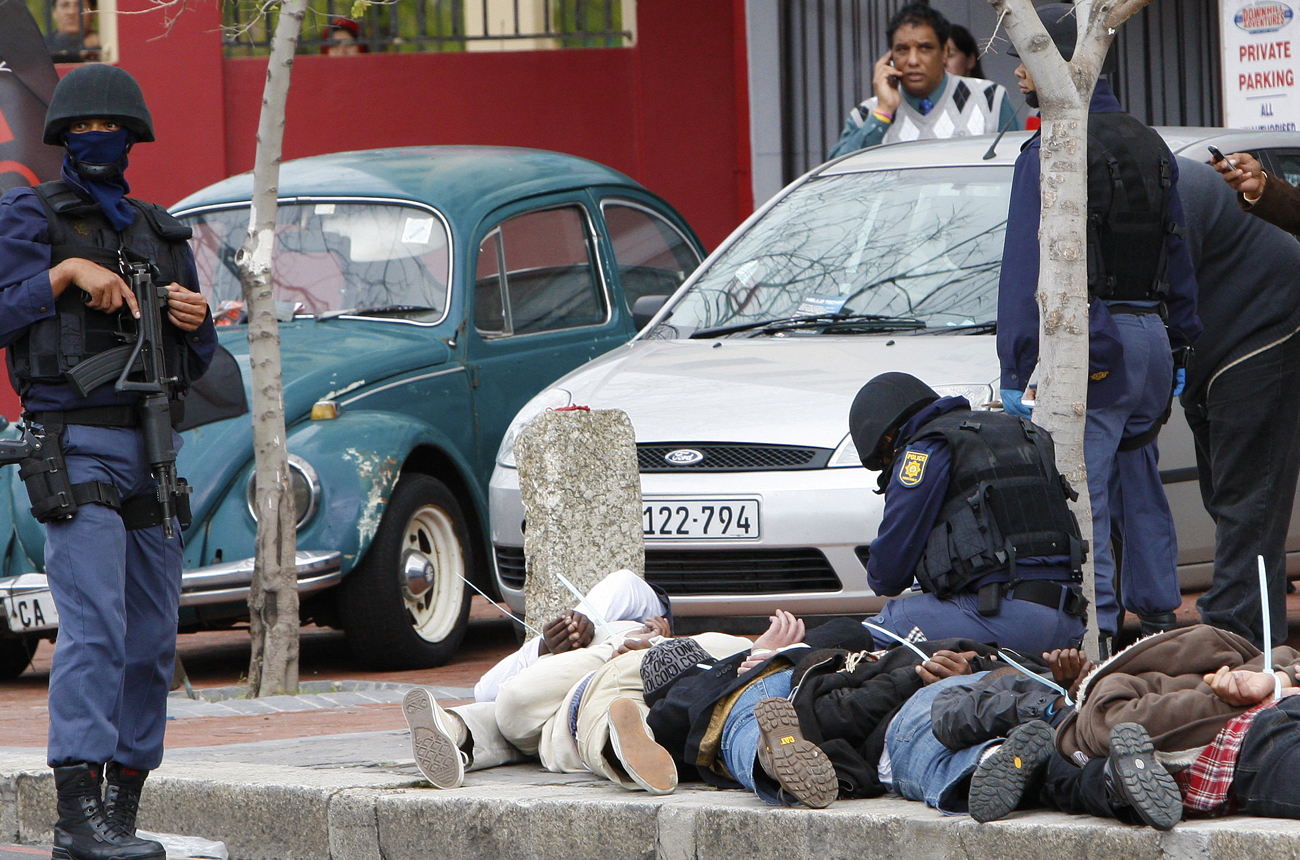 It was a battle in which e.tv shouldn't have aired the segment the SAPS shouldn't have used apartheid-era laws to attack. At the end, the two eNews Channel journalists, Mpho Lakaje and Ben Said, are told they don’t have to appear in court - yet, despite not having given up the identities of the two men they filmed.

It really has been all about the police ministry’s ego. Well, actually the ego of the police minister himself, Nathi Mthethwa, and his Commisioner Bheki Cele. When they saw e.tv’s broadcast of two men cocking pistols and claiming they were ready, willing and able to attack tourists attending the 2010 Fifa Soccer World Cup in June, they had only one question, “Who were those masked men?”. When e.tv was less than willing to stop the broadcast and then said they weren’t that keen to identify the men involved, the minister and the Commissioner resorted to their usual tactic of, how shall we call it, bombast.

That was followed by lots of sound and fury signifying pretty much nothing at all. You had the unedifying sight of a cabinet minister claiming e.tv was a criminal, using the mature logic of “a friend of a criminal is a criminal”, not exactly the height of political sophistication.

In the end, what journos call “205s”, a section of law that refers to what happens if you know about a potential crime, but don’t report it, were issued against e.tv. Famously they were used against reporters and journalists by the apartheid regime. As a result, it became one of those small legal niches occupied by lawyers who didn’t much like the previous regime. They knew all the arguments, how it was the job of the police to find crooks, not journalists, how journalists should not have to give up their sources, which would inhibit the entire practice and how society needed to hear from those on the other side of the legal curtain from time to time. Sometimes they were successful, sometimes not. In one case everybody saw and heard Peter Mokaba shouting “Kill the farmer, kill the boer”, but only a journalist was subpoenaed. That’s how this law was used – to get journalists to rat on lefty politicians.

There is no better expert on this than Gilbert Marcus SC. His previous client’s first name was “Constitutional”, it’s second name, “Court”. And so it was no surprise for us to find him in the bowels of the Johannesburg magistrates’ courts. And bowels is the word. The magistrates’ courts are probably the second most Kafkaesque building in the country, after that wonderful display of 1970s architecture now known as the Charlotte Maxeke Hospital.

It must have been quite daunting to be a badly paid prosecutor and walk into court yesterday as e.tv was not holding back. Its journalists arrived with the company attorney, a spokesman (of course) and the company’s MD, Bronwyn Keene-Young. So it’s safe to say Mpho Lakaje and his news editor, Ben Said, had their full support.

Their case was much more carefully thought through than the state’s. It must have been quite something for the minister and the Commissioner to hear that there’d been an official memorandum of understanding between government and the South African National Editors’ Forum. It’s something the NPA has studied quite intently in the last few days. They’ve realised it spells out, very clearly, that they should have spoken to e.tv first, tried some kind of negotiation and tried to see exactly what was going on.

The issue was particularly pertinent as one of the men on the tape had been caught by police officers, pretty much proving it was all bombast in the first place. SAPS seems to want to pick a fight with e.tv more than anything else – maybe trying to make others in the media think twice before publishing anything remotely similar. As a result, they shot their mouths off first and thought later.

For now, e.tv is off the hook. They have to make submissions to the NPA later this week. Then it’s up to our old friend, Menzi Simelane. He has never struck us the independent sort, so it should be interesting. Will he listen to them, and reckon it’s just not worth what will be a lot of time and effort? Or will he try to work out which way the wind is blowing first?

For e.tv, the best-case scenario is for the police to pull finger and catch the other guy on the tape. That would get them off the hook, and everyone would have the satisfaction of knowing that two bad guys are in jail.

But in essence this has been a ridiculous storm in a tea cup. The two men aren’t really journalistic sources worth protecting, actually they were not sources at all. However, journalistic principles are worth protecting, and e.tv is right to stand up for them. No one would really have cared about this had there been no reaction. No one would have picked it up and that would have been the end of it. But, as is beginning to happen too often in our politics, ego got in the way. Silly, isn’t it?

Photo: Police stand over six suspected armed robbers arrested in central Cape Town, September 3, 2009. South Africa has one of the world’s highest rates of violent crime, with 18,487 murders, 36,190 rapes, and 14,201 reported carjackings in 2007-8, according to police. REUTERS/Mike Hutchings