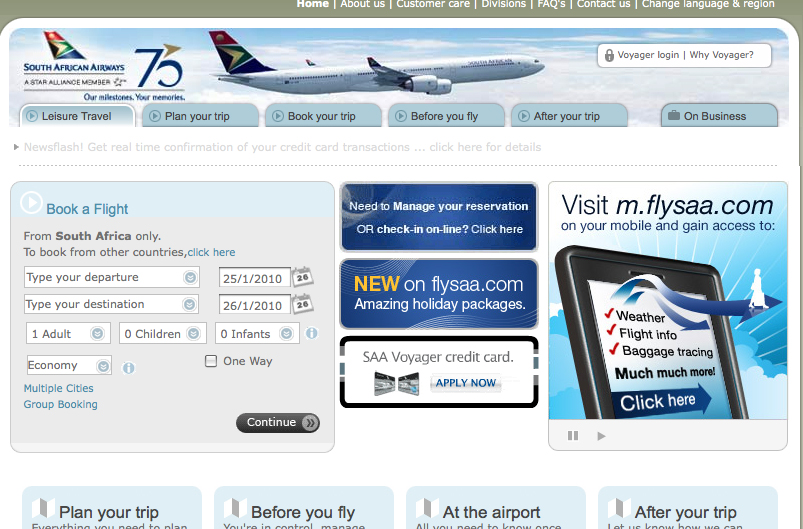 The primary SAA website, flysaa.com, was offline for part of Saturday and Sunday after an administrative error put the domain under suspension.

SAA’s internet service provider, The Net Technologies, neglected to pay the annual fees that give the airline the right to use the domain, and nobody noticed until it was automatically suspended. As a result, all customers who tried to access www.flysaa.com were instead presented with a message from the registrar for the .com top level domain, Network Solutions.

By Sunday afternoon the error had been corrected (all it took was a payment of a couple of dollars, which could be done by credit card within minutes) and SAA was down to the business of dodging the media while it apportioned blame and figured out how much business it had lost. Meanwhile the airline was being pilloried for its technical incompetence.

But SAA is in good company in this regard. Microsoft has had crucial domain names lapse more than once; in 1999 it failed to pay for the Passport.com domain, which locked many users out of its online services, and it temporarily lost control of Hotmail.co.uk in 2003. The predecessor magazine to The Daily Maverick permanently lost a .com domain that had been parked for future use when the service provider, WebAfrica, failed to do its part. Read the right blogs and you’ll come across similar incidents on a regular basis. The websites just aren’t significant enough for the temporary outages or loss of domain names to make the news.

In virtually none of these cases does the fault lie with the domain name holder, at least not directly. Just about every domain name registration is administered by an internet service provider; even individuals prefer to pay a small extra fee and use the automated or semi-automated systems of such companies rather than handle the paperwork themselves. Although annual domain name fees are tiny (on the order of hundreds of rands for almost every top level in the world), the cumulative amount that internet service providers pay on behalf of their customers every year can start adding up to real money. And like all clever businesses, these ISPs try to optimise their cash flow.

The result is that most ISPs will wait until the very last second before making a required domain name payment. Sometimes their systems fail. Sometimes they miscalculate. However it happens, when something goes wrong the impact on customers can be catastrophic. Yet the service providers tend to not learn from their mistakes.

Here’s hoping SAA sues the pants off The Net Technologies. If the damages are monumental enough it may provide a much-needed kick to the rear end of the industry.