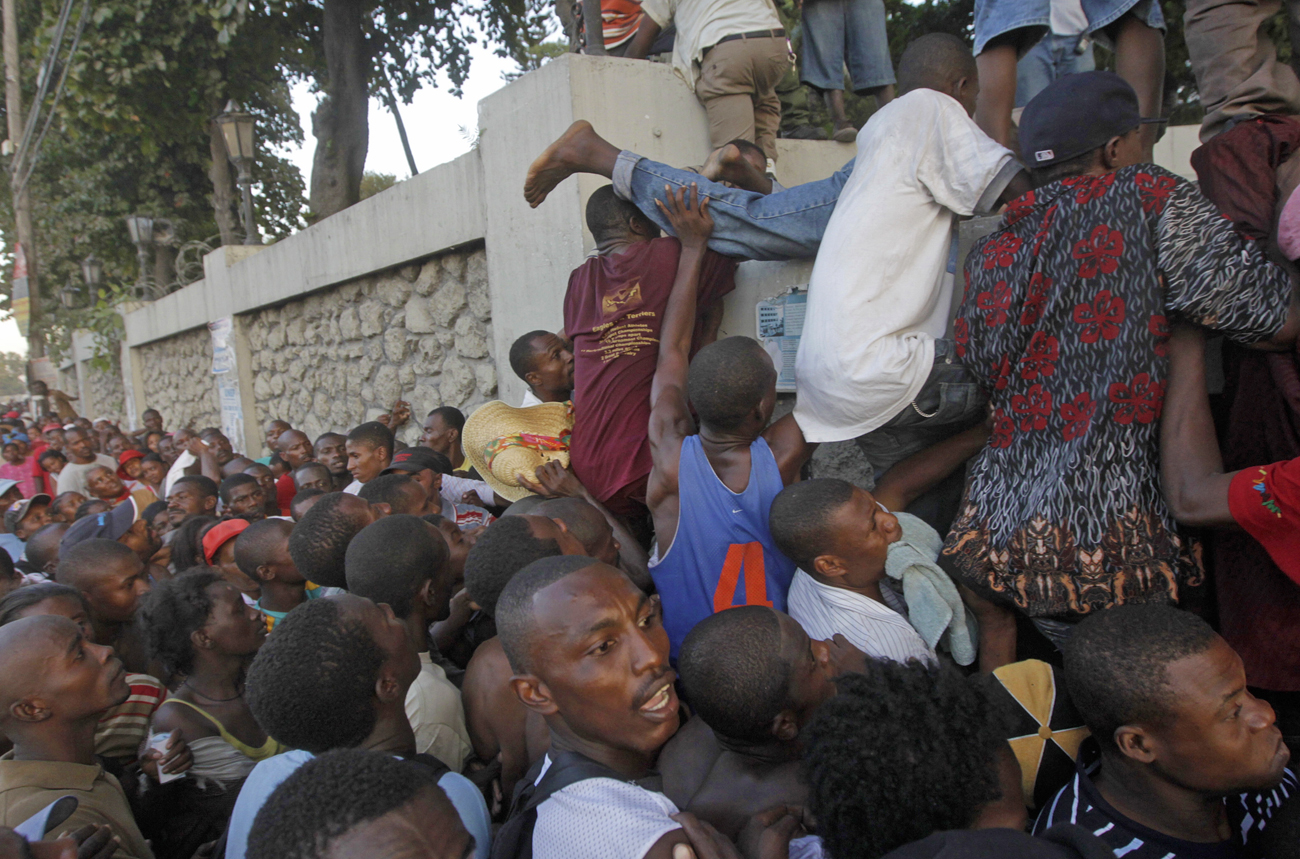 Also today: Obama’s promise dashed by resurgent Republicans; US Supreme Court hands over democracy to big business; Oprah to be undressed by kiss-and-tell-biographer; US wants China to look into Google hacking claims, but Chinese won’t blink; Holy Moley, he’s gonna blow us up (not); HIV spreads tentacles beyond drugs’ reach.

US troops have arrived in Haiti with more earth-moving equipment, and now mass graves are being dug near the capital Port-au-Prince to bury up to 10,000 people in a single day. Voodoo priests don’t like that though, so there is new trouble brewing. Many Haitians are still dying of injuries from the earthquake 10 days ago, as medical care is in short supply, and half-a-million people are living in the streets with little sign of food or water. International aid organisations are frantic, saying outbreaks of diarrhoea and respiratory tract infections could see another wave of deaths. The death toll from the quake is estimated at 200,000, and some 80,000 people have already been buried in mass graves. Across the epicentre of the temblor, officials now reckon they’re dealing with some two million homeless people. It’s a disaster on an epic scale, and Haiti’s airports can only handle a tenth of the 1,400 flights waiting to come in.

It’s pretty much how things work when you’re president. All your cherished ideas get put through the wringer, and then unwound. So, Democrats’ desperate efforts to save US President Barack Obama’s monumental healthcare overhaul are hitting a brick wall. Congress won’t play ball and pass a Senate version of a vision that they love to hate. Now there’s talk of watering down the proposed reform, in order for it to have bipartisan appeal, but the Republicans and their allies are unlikely to roll over that easily. House Speaker Nancy Pelosi doesn’t have the votes to move the Senate’s bill through Congress and into the Oval Office. Suggestions that the new law will be diluted by changes that Congressional members demand, like easing a tax on higher-cost health plans, are a case of shutting the stable door after the horse has bolted. The GOP has long left the party, and is coming out swinging after taking former liberal Senator Ted Kennedy’s safe seat in Massachusetts. A Democrat icon, Kennedy died last year, after holding the seat for 46 years. Republicans are newly invigorated by the defeat, and Obama’s cherished healthcare reform is now floundering.

US Supreme Court hands over democracy to big business

A bitterly divided US Supreme Court says big business can spend huge amounts of moollah to influence candidates for president and Congress. This green light for unfettered lobbying puts the kibosh on long-standing efforts to limit the political influence of corporations and labour unions on the electoral process. The limits have never really worked, though, as the suits who wander round Capitol Hill with bulging pockets have always shaped the political landscape. But now they have been allowed to let rip. The court’s decision could have a big impact on mid-term election campaigns, starting now, and comes at a time when US President Barack Obama’s Democrats are fighting a resurgent Republican onslaught. The court ruled in favour 5-4, overturning parts of a decades-old law that said commerce and unions can be prevented from using their own money to fund their own political campaigns. They still can’t give cash directly to candidates, but the court agreed that such limits are an unconstitutional restraint of free speech. This means that American politics will now be the preserve of agendas dreamt up by big oil, Wall Street banks, giant health insurers and powerful labour organisations. It’s another major loss for Obama. Ouch! McDonald’s for president.

Oprah to be undressed by kiss-and-tell-biographer

Kitty Kelley, known to some as “the colonoscopist of the stars”, is a kiss-and-tell US biographer, whose written books on Jackie Kennedy Onassis, Liz Taylor, Frank Sinatra, Nancy Reagan and the British royal family. She’s now unleashing the mammoth unauthorised Oprah: A Biography. You can bet that the lines will run for blocks around bookstores come the April launch. With the first printing said to be at least half-a-million copies, Kelley’s scandalous exposés will set the scene for Winfrey’s agonisingly long and self-promoting two-year exit from her hit show. Kelley says she likes Oprah, but is committed to writing the truth. We can’t wait.

US wants China to look into Google hacking claims, but Chinese won’t blink

The US wants China to investigate the recent cyber attacks on Google that have caused the company to say it might leave China. That’s a bit like asking the fox to empty its own hole of cubs. Google suspects the Chinese government is complicit in attacks on accounts held by Chinese human rights activists, and hacking into the networks of some of its biggest clients. Secretary of State Hillary Clinton says the world’s largest search-engine firm should point-blank refuse to support politically motivated censorship, and says other big Western companies should follow suit. But that would mean that all such companies would have to band together and threaten to exit China (Ha, ha). If they don’t, China will beat them hands down, and nothing will change in its race to become the world’s biggest economy, nor its unseemly practice of state control over common democratic freedoms. The Google issue is one that affects democracy as a whole, as too many nations to mention impose censorship in all possible forms. It’s time for the West to stand up and put its money where its mouth is.

Holy Moley, he’s gonna blow us up (not)

Passengers aboard a US Airways flight showed the true meaning of fear and ignorance, after a plane was diverted to Philadelphia when a Jewish teen’s prayer items triggered a bomb scare. He was wearing a phylactery, a small black box Orthodox Jews strap to their head as part of morning prayers. So, many passengers must have assumed he was from Al Qaeda and was about to blow them to Kingdom Come, after a Nigerian-born Muslim scared the bejaysus out Americans by trying to detonate an underpants bomb over Detroit on Christmas Day.

Here’s one that should terrify everybody. Just as malaria has outwitted many drugs, US researchers believe strains of drug-resistant HIV will soon stalk San Francisco. San Fran (no, not Frisco) is where it all began some decades ago, when homosexual men suffered a plague of deaths from their habit of frequenting gay bath houses. The researchers say numerous drug-resistant strains of HIV have evolved over the past 10 years in San Francisco. These are more noxious than ever, and much more easily transmitted between individuals than previously believed. It’s a no-brainer that this will have a hugely negative impact in the fight against Aids. And is something that South Africa should jump onto quickly.