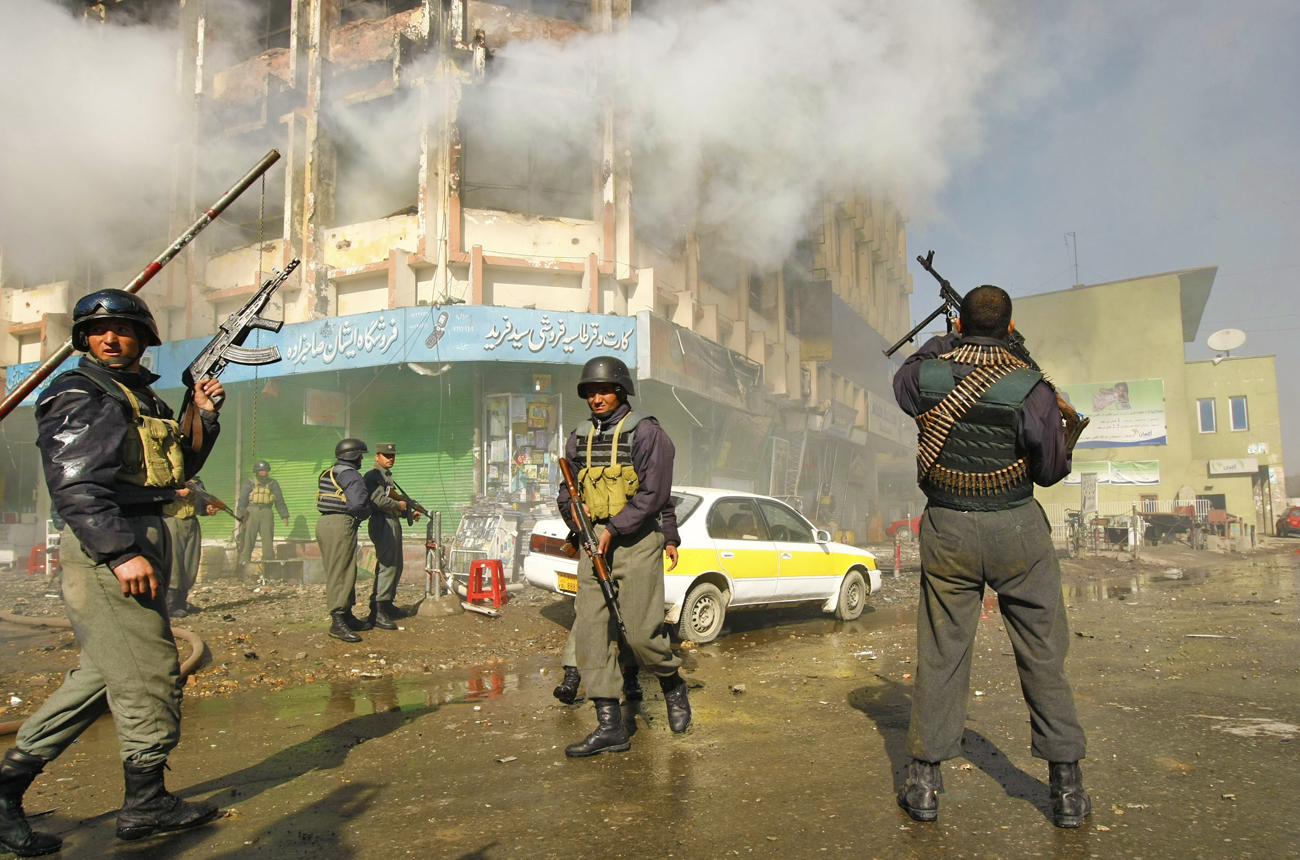 The US and Nato have tens of thousands of troops on the ground in Afghanistan, but Taliban suicide bombers still found their way to the centre of Kabul, causing mayhem near the presidential palace in a battle that killed 12. It goes to show that despite extensive security, the Taliban aren’t about to lie down in the face of an allied surge to end the war. The attacks took place over five hours, covering four different locations in the central city. One suicide bomber detonated his explosives at a major intersection near the palace, central bank and the luxury Serena Hotel, while others stormed a nearby shopping mall, where another two bombers were killed when their explosives detonated. It looks like the war is just getting started, as another 30,000 US troops enter the fray. Photo: Reuters.

So far, it’s just an assumption, but a ghastly one, and reminiscent of the death toll in the Asian tsunamis of 2004. The earthquake in Haiti may have killed as many as 200,000 people, says a US general leading rescue efforts. That’s a big temblor, with one of the highest tolls in recent history. Reports say at least 70,000 people have already been buried in Haiti, while troops, doctors and aid workers arrive ahead of a pledge by European nations to provide nearly $500 million in emergency and long-term aid. The US has promised another $100 million, but this doesn’t help the immediate situation, with people scrabbling for water and food. It’s become pretty anarchic, with transportation bottlenecks, bureaucratic confusion, and fears by rescuers of attacks on aid convoys as looting spreads in the capital, Port-au-Prince. More troops are on their way to help an existing 7,000 military peacekeepers and 2,100 international police in Haiti. But the magnitude of the job is as large as the magnitude 7.0 of the quake itself. Estimates say 250,000 people were injured and 1.5 million of the country’s 9 million people were made homeless.

Democrats and Republicans squared off in the battle for former Senator Ted Kennedy’s “safe” seat in Massachusetts. It became vacant when the famous liberal politician died last year after giving the Democrats 46 unbroken years of political security. Observers say the battle could turn on President Barack Obama’s health care overhaul and just about everything else he is doing. His popularity rating has plummeted since he took up the job of running the country, as he struggles with issues around Iraq, Afghanistan, the fallout from a would-be Nigerian airplane bomber and the continuing woes of the economy. Democrat Martha Coakley needs a win to deny Republicans an opportunity to block Obama’s initiatives to make healthcare a right, not a privilege. But the legacy of the markets crash is the biggest obstacle to a Democrat win, and blaming Republican predecessor, George W. Bush, for the mess — however true — is not what the public want to hear. Although Democrats outnumber Republicans 3-to-1 in Massachusetts, little-known Republican Senator Scott Brown is turning this into an extremely close battle.

The International Monetary Fund reckons China and other Asian emergent economies are leading a global recovery, and it’s faster and stronger than expected. Yippee! But slow down, as money rushing into these markets could lead to asset bubbles that bring the house tumbling down all over again. Particularly worrisome is China’s red-hot real estate market, which is being flooded by renewed Chinese bank lending. And resurgent economic growth from Thailand to South Korea is still not seeing job creation at levels governments want. The IMF’s operating chief, Dominique Strauss-Kahn, is hinting the body will raise its 2010 global growth forecast from the 3.1% it projected in October. He said it doesn’t foresee a “double-dip” recession, whereby markets plunge to renewed depths, but warns that the outlook remains very fragile.

Chilean President-elect Sebastian Pinera showed his true colours when he told his countrymen to head in a direction of which John F. Kennedy and Barack Obama would approve. The conservative billionaire businessman’s victory speech – he won Sunday’s election by a narrow margin – was long on rhetoric and short on detail, but it’s early days yet. Sounds a little akin to the situation in South Africa, as we report elsewhere today. Other than a vow to fight drug trafficking, foreign policy was put on the backburner. His victory has gone against the grain of a recent swing to the left in South America, and political overflow from Chile’s neighbours may make national unity difficult to achieve. The country’s centre-left politicians have had two decades of uninterrupted rule, so Pinera in his conservatism will have to avoid resurrecting memories of Augusto Pinochet’s 1973 to 1990 dictatorship. He’ll also have to avoid antagonising regional populists such as Venezuelan President Hugo Chavez, by his friendship with Colombia’s conservative President Alvaro Uribe (who’s a thorn in Chavez’s side). Pinera is one of a few centre-right leaders in Latin America today. He’s already called Cuba a dictatorship, and said Venezuela isn’t a democracy. Where will it go from here?

One problem with being the world’s greatest democracy is that your less-than-democratic friends (and enemies) use your freedoms against you, testing you in your own courts. That’s what happening over the infamous Guantanamo Bay prison detentions, and continues in the case of the World Trade Center suspects. Now Iraq has opened a new front in this campaign by collecting signatures for a class-action suit on behalf of people killed or wounded in actions involving US private security firm, Blackwater. Iraq’s Prime Minister Nouri al-Maliki says the country will seek reparations for incidents such as the 2007 killing of 17 Iraqis in a Baghdad square by Blackwater personnel. A US judge has already dismissed charges against five of the company’s guards over those killings. In the face of the controversial and complex legalities, American officials are terrified of courts setting a precedent on such issues. They’re already fending off a bunch of apartheid-era lawsuits that make the woes of Ford and General Motors seem far more pressing.

Exit polls in the Ukraine show that the battle is on between current Prime Minster Yulia Tymoshenko and a former PM Viktor Yanukovych, who will now fight each other in a run-off in three weeks, because none of the candidates has gained the 50% plus one vote needed to win the elections. Tymoshenko and current President Viktor Yushchenko, who garnered a meagre 6% of the vote and looks set to exit the scene, have bickered for years, stalling any advances in the former Soviet state that now looks largely to the West for its salvation. As a measure of the political atmosphere, Yanukovych, who was accused of rigging the 2004 election, has garnered more than 31% of the vote. Tymoshenko has more than 27%. How it’s going to go from here is anybody’s guess. But the public will decide, and that’s that.