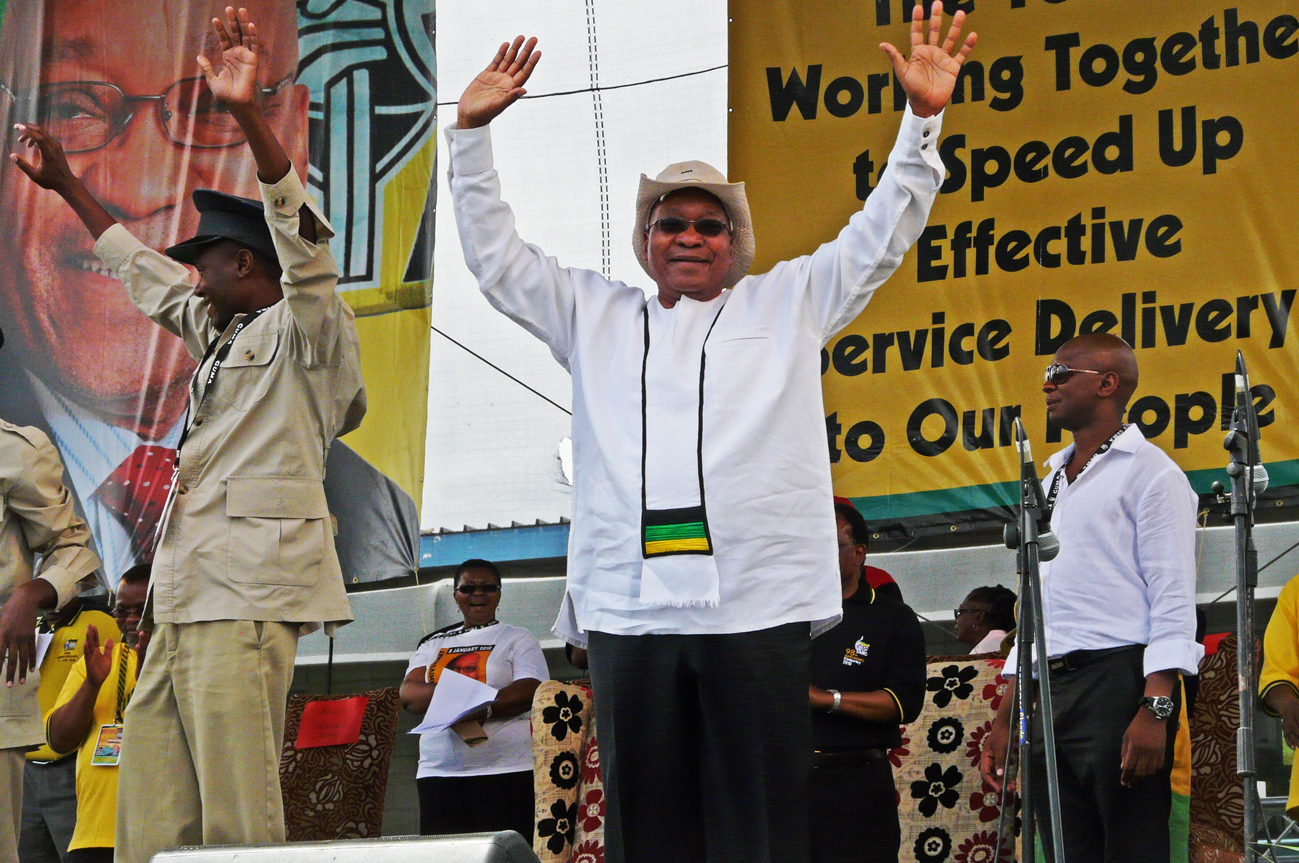 There’s nothing quite like an ANC rally and Kimberley on Saturday was no exception. It was an assault on the senses; a near-riot of people, T-shirts, colours, and sounds. Especially sounds. They’re loud. Gobsmackingly so, make-your-chest-hum loud.

There are several key ingredients to a good ANC rally. The politics of T-shirts. They used to proclaim to be “a hundred percent someone”. Now they’re white (sporting the ANC logo with a picture of you-know-who) and red (for the communist brothers). Then there are the slightly frustrated marshals, a sound system to make an ANC Youth League member cry with envy. And, of course, Jacob Zuma. Our President isn’t just the rock star of South African politics, he is THE rock’n’roll. He is the vibe, the noise, the dancing, all rolled into one. (I notice you stayed away from any mention of sex? – Ed.)

Tens of thousands of people made the trip; many of them would have been up all night for a glimpse of South Africa’s rock’n’roll. And for a cheap T-shirt, of course. (Were they made in China? – Ed). The ANC is great at organising these events, and Fikile Mbalula should get most of the credit, as organiser-in-chief. He’s a pretty dab hand as MC as well – in our opinion, slightly better than Thoko Didiza when she used to do it in happier days for the Mbekites. But you don’t care about that. You want to know what the rally means for your life, and, because you’re kind of interested, what it means for Alliance politics.

Let’s start close to home. The ANC wants the National Health Insurance Scheme, and it wants it now. Like in 2010. Okay, they did say that last year, but this time around, President Jacob Zuma says: “We’re determined to bring it in this year.”

There’s also an interesting line in the full January 8th Statement from the ANC. (The president only delivers an executive summary, while the full document is published separately. It is actually put together by the NEC, with a lot of history behind it, so the party takes it seriously.) It reads: “It is an established fact that the current command of health resources by the private health sector which serves a minority section of the population, has been to the detriment of the public sector on which the vast majority of South Africans depend.” In short, the ANC believes that the existence of private hospitals detracts from public hospitals, which is very much like saying that private security companies operate to the detriment of the police. But more on how we feel about that later.

The ANC is also going to prioritise local councils this year. It’d better, because municipal elections are upon us next year and the DA will probably be a formidable challenger this time around. It does look as though the party is, finally, very worried about the spectre of service-delivery protests, particularly if they move to the bigger cities. (As a result, expect a few big ANC names to head to the municipalities, and a lot of talk about this over the next 12 months.)

Zuma also wants more effort put into education. In particular, and he’s said this before, “Teachers must start on time, and teach for seven hours a day.” He’s absolutely right. But he’d better have a few friends in the room when he tells the South African Democratic Teachers Union (Sadtu) the same, as they’re not likely to take kindly to such a pronouncement. The ANC will be putting itself on a collision course with Sadtu, and soon, which could be a good thing, as teachers do need to be held more accountable and the ANC is probably the only remaining body in the country capable of achieving this.

Then there were the usual mentions of the electricity problems (but no solutions offered); the state of the economy (it may be growing but don’t bet on any new jobs yet); and, of course, the World Cup. There was plenty about that actually, and an appeal to everyone to use the tournament to bring the country together. It’s such an easy goal for Zuma that he’s likely to mention it in every speech he gives for the next six months. Photo: The T-shirts were white this time… (Photo by Stephen Grootes)

As always, more interesting were the politics of the alliance. At the Kimberley rally there was plainly some booing as the name of SACP General Secretary Blade Nzimande was announced, but it was surprisingly brief. To avert any further mishap, ANC Chair Baleka Mbete took the precaution of announcing all the speakers at once, and then having them go up in order.

Mercifully, Nzimande wasn’t interrupted while speaking. But he did hit back cunningly, saying that the SACP was part of the Alliance. He continued in Zulu, but roughly translated, he said: “We’re part of the Alliance, whether you like it or not.” He also had a go at the media (it’s an ANC rally, after all) for trying to create problems within the Alliance. He was happy to say that the Alliance is in better shape than it has ever been. It didn’t take the sharpest mind to see he’s officially on the same page as Zuma, who said much the same thing, almost word for word. Photo: … And the red T-shirts were left to communists. (Photo by Stephen Grootes)

All in all, a rally is a rally is a rally. But this reporter will now drop the reporting hat and do some analysis, because it is screamingly necessary: the assumption of President Zuma and the ANC NEC that the existence of private hospitals is to the detriment of public hospitals is just plain wrong and downright dangerous. And it is the type of statement that will go pretty much unchallenged; it will be repeated and repeated, until in the public mind, or at least the ANC voters’ mind, it becomes the truth.

The problem is, it isn’t. Aside from all the issues that attend the private health system (like inflation that is way higher than general CPI, not just here but in much of the developed world), private hospitals are still capable of providing service that the public system is clearly not up to. The real truth to all of this is that the public system is a complete mess. And it’s like that because of bad management (anyone want to re-read the ANC’s official obituary for Manto Tshabalala-Msimang?), and a desperate, systemic lack of resources, financial and human. The system is broken not because some nasty man in a Discovery Health coat came and took all the cash (although medical aid providers, and private hospitals especially, are coining it). It’s because we’re a developing country, and we haven’t put our best government brains into running the thing.

If you tried to say that people who use private security companies are a drain on the police, you’d be laughed out of politics. It’s exactly the same in the health system: people use private hospitals because going to state hospitals would be detrimental to their survival. And as they’re the ones paying most of the tax, they end up helping out those who have no choice but to use state hospitals. It doesn’t help that the ruling party will, in their ideological blindness, once again divert resources in the very wrong direction of destructing a system that works, albeit expensively, before recreating a system that will not work, and even more expensively so.

The real problem is fixing state hospitals, and that would probably take a generation of time and plenty of skills and resources. And there’s not much evidence that the ANC cadres have either, or even the will to do it. Photo: Gwede Mantashe and Julius Malema were friends for a day. (Photo by Stephen Grootes)

Spleen thus vented, let’s return to the matter of reporting. Overall, the Kimberley event went as expected. There were no major policy announcements; nothing we haven’t heard before. Most people behaved themselves. And despite some public disagreements, everyone in the Alliance is united in a hunky-dory kind of universe.