The Moonie church loses its grip on doctrine, money and...

The Moonie church loses its grip on doctrine, money and leadership in slo-mo 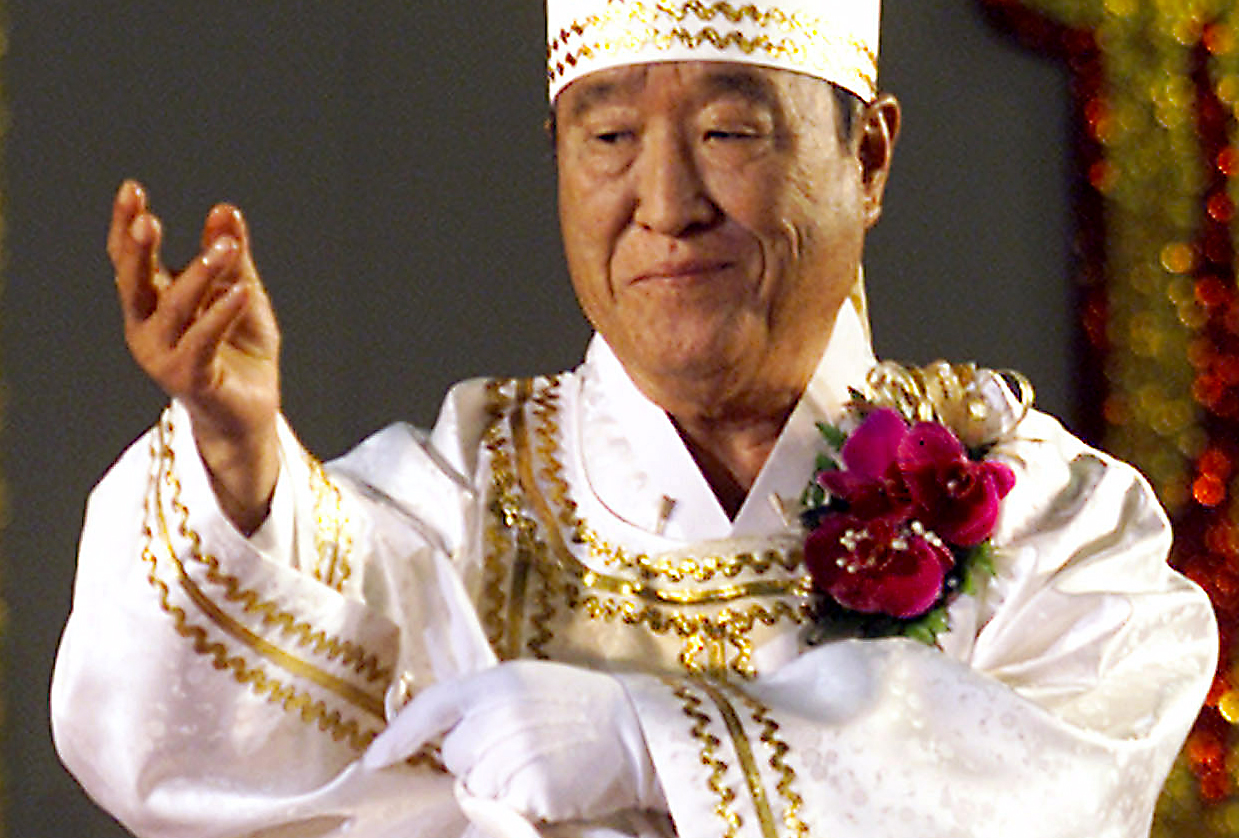 The Unification Church, better known as the Moonie church and best known for its enormous mass-wedding ceremonies, is in crisis. And it's not just a struggle for leadership either, though that isn't helping the slide of its once-prosperous business empire.

First it was the purge in its allied publishing arm, with three senior executives fired at the Washington Times newspaper after humongous amounts of red ink. Most recently it has had trouble in a clutch of Moon-connected businesses. And with its founder, Reverend Sun Myung Moon, having reached the 89-year mark and stepping aside, it is at least a question as to whether the church has another decade in it, unless something changes fast.

Moon is still alive and kicking, but that won’t be for much longer, and once he leaves this mundane plane of existence, so may much of the power he has accumulated in the last 55 years. After all these years of pursuing both business interests and political influence, it all seems to be slipping away.

Since its heyday in the 1970s, Unification Church membership has slipped significantly. Recently, the church even rearranged its marriage customs so that parents – and not just clergy – can pick marriage partners.

To outsiders the change in fortunes have become clear since last month, when Moon handed over day-to-day control of the whole shebang to his three American-educated sons. But Preston Moon (aka Hyun Jin Moon) and Sean (aka Hyung Jin Moon) promptly issued dueling memos to assert control over various, competing parts of the Moonie empire. Its clergy are trying to stay out of the crossfire, and, as one of them told the Washington Post, “I don’t think it’s my responsibility to know. Things are normal.” There is no need to “get into all that drama.” Obviously no troublesome, questioning priests here to be gotten rid of, regardless of who triumphs.

Meanwhile, back at the office, it sometimes seems that the church has not a single material asset that isn’t in trouble. It prized possession, the Washington Times, has been subsidised to the tune of a billion bucks (that’s Dollars, not Rand) since 1982, and sources say the paper has lost twice that since it was started. Also suffering are the United Press International wire service (a news service that has long since lost the luster it had many years before) as well as a TV/video production house. The video house (a provider of production services for ESPN) has laid off half its staff, UPI is a hollowed out shell and a jewelry chain it also owned went bankrupt last year. On the non-profit side of the empire, its private school in the DC area is struggling and a Moon-supported ballet academy has had half its subsidy cut.

In politics it hasn’t done so hot either. Over the years, the Unification Church has been linked to various influence-peddling efforts and has been the subject of American congressional investigations. The church’s founder was convicted of tax fraud and conspiracy in 1982. Linked to a variety of anti-communist political efforts, the church even paid for full-page ads in major newspapers in 1974 to defend then-president Richard Nixon – just before the Watergate scandal engulfed him.

And when it comes to theology, a slow shift has become a rapid slide away from its relatively mainstream roots. Unification Church members believe Jesus appeared to Mun Yong-myong (the reverend’s original name in Korea) when Moon was 16, and asked him to accomplish the work left unfinished after his crucifixion. After a period of prayer and consideration, Moon accepted the mission, says the church.

American social historian, Irving Louis Horowitz has compared the attraction of Unification teachings to American young people at this time to the hippie and radical movements of the 1960s and 1970s. Horowitz has written that Moon’s church “is a ready-made doctrine for impatient young people and all those for whom the pursuit of the complex has become a tiresome and fruitless venture.”

In recent years, however, the church has taken an increasingly eclectic approach to its religious doctrine, claiming direct communication with the spirits of such varied figures as Confucius, the Buddha, Jesus, Muhammad and St. Augustine, as well as political leaders Karl Marx, Friedrich Engels, Lenin, Joseph Stalin, Leon Trotsky, and Mao Zedong, among others. This litany has obviously moved it a growing distance away from most mainstream faiths. Along the way, the church has even argued that the Holocaust was God’s way of taking back from those affected by it – something that you won’t see in the texts of most organisations.

The Unification Church isn’t the only new religion that found fertile soil in northeast Asia after World War II and its political and military turmoil. Neither is it the only religion to get tied up in complex legal and business trouble (witness Scientology’s problems in Germany, Australia, America, for example). But while Scientology managed successfully to navigate the choppy waters of life after its founder, L Ron Hubbard, died in 1986, it remains to be seen how the “Moonies” will fare once Rev. Moon finally joins his eclectic list of communicants from beyond.