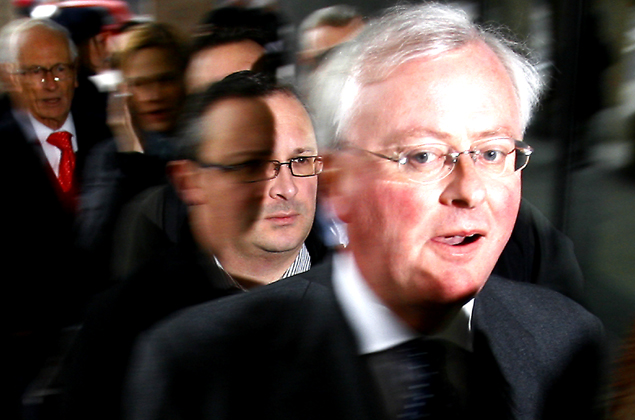 Two London bankers have now turned to the church to defend the banking system, its profits and the bonuses paid to senior executives. Perhaps they fear a turn to the rock-solid (if less wildly profitable) imperturbability of Islamic banking. Or, more likely, the wrath of the British public by way of their government. Or, even more likely, the damage some see being done by their own colleagues who are calling for a moral reawakening.

If two make a trend, then the trend is now for bankers to invoke Christianity in defence of their business practices.

“Profit is not satanic,” the chief executive of Barclays, John Varley, told the congregation of London’s famous St Martin-in-the-Fields Church on Wednesday. He later expanded on the topic to Bloomberg, pushing the point that “fair reward” is compatible with Christianity.

That might have been remarkable in itself, especially before the 2008 crash led to so much navel gazing within the finance industry. But Varley is only echoing, slightly weakly, what Brian Griffiths of Goldman Sachs said more than two weeks ago. “The injunction of Jesus to love others as ourselves is an endorsement of self-interest,” is the best sound bite to come out of his address in St Paul’s Cathedral.

Churches in and around the City of London have reported an increase in attendance by financial sector workers, and many have organised discussions around the morality of high finance. That meshes with other reports of both genuine soul-searching among those responsible for the recession and the clearly fake repentance of others who are seeking to limit future government involvement in banking.

The issue of greater regulation has just about been settled in both the US and Europe; the zeitgeist will not allow a return to laissez-faire. But public opinion on remuneration for finance workers, by contrast, could still be swayed. That is the battle now being fought on religious turf.

Lazard International chairman Ken Costa, who is deeply involved in church work, is one high-finance leader who has called out his industry for its moral failings, citing irresponsibility and greed as examples of how banking strayed from the path. He isn’t alone, and these internal critics have added credibility to the greed-is-bad camp, which wants a ceiling on how much banking executives can earn.

Clearly the debate is still hot, and clearly theologians and church leaders have the power to shape it. Who’d have thought it?