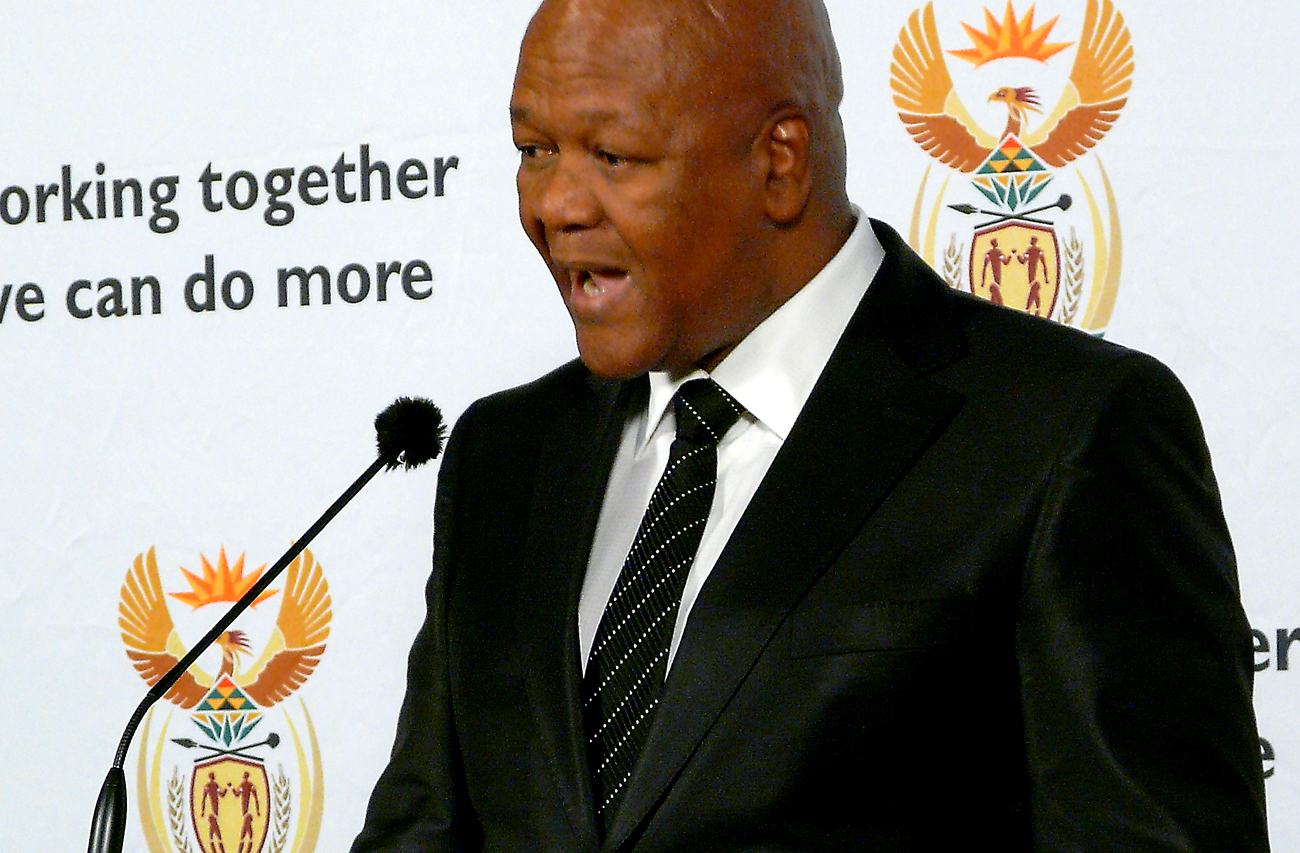 Monday’s press conference called by justice minister Jeff Radebe was a strange affair. Radebe came out shooting from both hips. And yet nothing really new was heard. At the end of it all, the same old question was still up in the air somewhere, unanswered: Why did President Zuma pick Menzi Simelane?

Justice minister Jeff Radebe came out with guns blazing at a press conference at the Union Buildings on Monday, saying new director of national public prosecutions, Menzi Simelane, was fit to hold office in every respect, whether by virtue of his legal qualifications, or the legality of his actions in telling former national director of public prosecutions Vusi Pikoli to drop charges against former top cop Jackie Selebi.

Radebe firmly rejected any hint of controversy over interpretation of the various laws governing the National Prosecuting Authority and the limits of departmental oversight, saying in his previous role as director general of the department of justice, Simelane was fully entitled to call Pikoli to account over Selebi, according to the NPA Act. He also said Simelane’s subsequent failure to disclose to the Ginwala Commission the letter he drafted to Pikoli, and which was signed by former justice minister Brigitte Mabandla, and Pikoli’s response to that letter, was just a simple memory lapse that was corrected at a later date.

In a side attack on Ginwala, Radebe said the letter was, in fact, submitted to the Ginwala Commission, and criticism that Simelane failed to disclose the letter was, therefore, a misrepresentation and attack on his credibility. He also attacked Ginwala, claiming she should have called former justice minister Brigitte Mabandla to testify. (It must have been a great pleasure to attack two opponents in one sentence!)

Radebe continued that, based on the findings of a legal report into the recommendations of the Public Service Commission (PSC), which conducted an investigation into Simelane’s conduct during the Ginwala Commission, he found no reason to censure Simelane, nor stand in the way of his taking up the top job in the NPA. He further called the PSC investigation a “flagrant abuse of [Simelane’s] fundamental rights” because its terms of reference focused only on Pikoli and not on the conduct of Simelane. Radebe said Simelane was never allowed to provide his own inputs into what was only a fact-finding enquiry, without any judicial basis, and that Ginwala was not required to draw legal conclusions.

On the question of Simelane’s later contradiction of his submission to Ginwala on whether he had legal advice over the Pikoli issue, Radebe said Simelane had later corrected himself. He said this did not mean he had lied to the Commission. He also pointed that, while the executive would never interfere with the prosecutorial independence of the NPA, the law states that cabinet has final responsibility over the National Prosecuting Authority.

Through all the cut and thrust of Radebe’s response, we’re still no closer to knowing why Zuma picked Simelane. We’ve had the “he didn’t get a fair hearing” defence, and the “we think he’s fit and proper” defence. But there’s been no attack. And in politics, like all things, if you’re not attacking, you’re defending.  There’s been no “this is why we picked him”. No extensive list of achievements, no “this is what he did in the struggle”. It begs the question, that there may not be any actual solid reason after all.

And another thing, as Radebe is not the best picker of words, he sometimes likes to mix up concepts. And there is one in this case that is quite crucial. David Unterhalter is seen as credible and independent. Radebe mentions him as one of the advocates who persuaded him that Simelane didn’t have a case to answer. But Unterhalter had been briefed by Simelane. He was paid to take that view. That’s perfectly ethical, it’s what lawyers do. But Radebe should be careful about disclosing Unterhalter’s real role in this.

Radebe also says Simelane “corrected himself” during the Ginwala Commission, when asked about whether he’d received a legal opinion on a certain aspect. This is the example so often used (yes, by us as well) to point out that Simelane may have a loose relationship with the truth. But you could argue that Schabir Shaik “corrected himself” when he argued that he was innocent during his corruption trial, and then in the Constitutional Court after that conviction was confirmed, when his lawyers accepted his guilt in his assets forfeiture case. Correcting yourself in court also has another name. It’s called Perjury.

Having a press conference to discuss this was not the best idea for Radebe. If he had something earth-shattering to tell us, then why not do so. Otherwise, one runs the risk of looking silly. When asked specifically about why Simelane was considered to be the best possible candidate, he said it was the president’s decision, and people in the room feel embarrassed for you. You have a press conference to justify the decision, and you can’t even answer the most obvious question: Why Simelane?

And so we’re back to what we asked originally: What’s in this for Zuma?