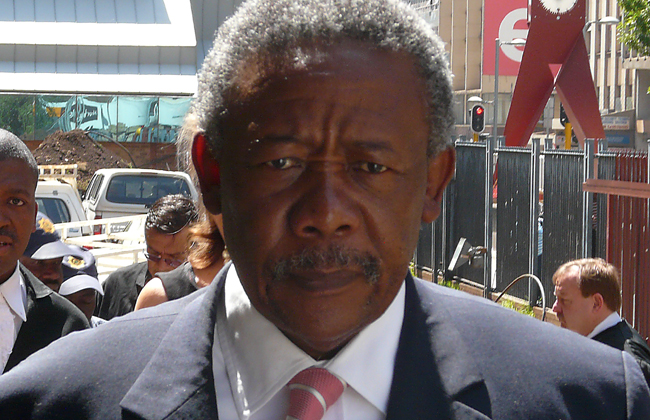 It was a hot, stuffy and forensic day in Court 4B at the South Gauteng High Court. Last week Judge Meyer Joffe got the lights fixed. This week the air-con broke down, leaving the witness, director of KPMG Services (the company’s forensic arm), Dean Friedman, telling the judge he felt lucky he didn’t have to wear robes on top of his suit jacket.

Friedman’s low-pitched testimony and the almost no-pitch court microphone had the gallery straining to catch a Sudoku session’s worth of numbers, including cheque, credit card and forex amounts paid to and from the accounts of accused, Jackie Selebi. Judge Joffe had little difficulty hearing, but was unable to present the court transcripts to the public, saying it would infringe Selebi’s rights until after cross-examination.

Most importantly, perhaps, Friedman said he could find no relationship between what were ostensibly Selebi monies and the death of Brett Kebble, but this will feature large in Agliotti’s trial over the killing of Kebble next year.

The upshot of the day’s evidence was clear. Selebi earned less than he spent, which meant the state questioned whether there was another source of income. This could be cash cheques emanating from Kebble slush fund, Spring Lights (holding R39 million at its peak, with similar amounts withdrawn), and controlled by Agliotti – and an amount of $30,000 Agliotti says he funnelled to Selebi via former fugitive businessman Billy Rautenbach.

KPMG’s forensic detail was telling, regarding cash cheques ostensibly paid to Selebi at the Midrand offices of event-management company, Maverick (also Mavericks in court records) – a company run by Agliotti’s former fiancée Dianne Muller, and serving as his “virtual office” over a period of years.

Friedman said the Scorpions asked him to investigate Kebble payments (by JCI and Consolidated Mining Management Services) into Spring Lights and a loan account called Misty Mountain, and to look into Selebi’s bank, credit card and investment accounts, including forex transactions conducted by himself and his wife, Ann. But Friedland said this exhaustive detail was a small part of the total remit, which no doubt included the missing billions from Kebble companies.

In a day of detail and minutiae, made more intense by a late start at 11.30am, Friedman described his methodology, and said he had also compared South African Reserve Bank forex records with Selebi’s bank statements over a three-year period. But not all went the way of the prosecution, with Friedman stating: “I don’t profess to understand where each payment went out of Selebi’s account,” referring to 112 cheques worth R450,000 between 2004 and 2006, including two debits of R200,000 each (for an investment and a car payment) that still left Selebi with R152,000 more than he started with.

“There was more debiting to the account than crediting,” Freidman said, indicating a R14,000 net difference on one occasion.

There were also periods when Selebi’s credit card expenditure dropped significantly relative to earlier purchases, and when payments to various utilities seemed only to be in cash, while transactions in foreign currency rose. Apart from the alleged Rautenbach money (said by Agliotti to be a cash payment in dollars), Selebi was receiving forex advances for international travels related to his job as police commissioner – travels that included his wife. During this period, Friedland said there were times when actual expenditure exceeded Selebi’s advance, meaning the SAPS subsequently owed him money. “I found there was more currency sold than was left after expenses,” he said, referring to an amount of R143,000.

Friedman also focused on the trail of cash cheques derived from the Spring Lights account, ostensibly the source of Selebi payments. “There was nothing in [payee] cheques indicating that Mr Selebi was paid, so I focused on cash cheques,” Friedland said. And here he largely came up trumps. One cheque for R10,000 was marked with the initials JS/GA.

“I associated it with Selebi and Agliotti, but also John Stratton,” Friedland said. The fugitive Stratton is a Kebble murder accused, and formerly a JCI director and Kebble’s right-hand man.

Chief prosecutor Gerrie Nel then returned to a previous cross-examination of Agliotti where defence counsel Jaap Cilliers attempted to show the alleged drug lord had his dates wrong in asserting he had given Selebi R200,000 sometime between 13 and 14 December 2004, saying the commissioner was in Upington at that time. But Friedland said there were no expense claims for that period.

At this point Cilliers interjected, telling Judge Joffe he was not objecting, but just ensuring the court knew the defence’s silence did not mean it accepted this testimony as evidence.

It’s going to be a long, hot summer from now on.