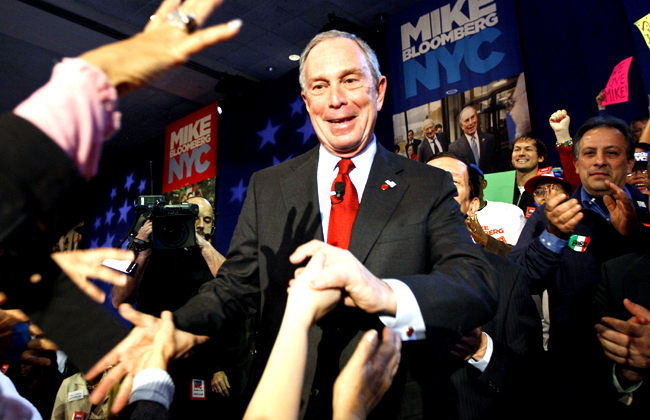 F. Scott Fitzgerald famously remarked there are no second acts in American lives. Wrong. Michael Bloomberg has now fully and successfully completed his transformation from Wall Street wunderkind to benevolent prince of America’s largest city by his third term win in this week’s off-year election. While his victory in a largely independent, largely self-financed campaign wasn’t as overwhelming as he had hoped, still, he won.

Now, after the election has happened, Bloomberg has suddenly demonstrated a real – if slightly belated – political nous towards opposition Democrats. Bloomberg reached out quickly to the various Democratic winners of other city-wide offices like public advocate (a sort of deputy mayor) Bill de Blasio and speaker of the City Council, Christine Quinn. The incoming city-wide comptroller, John Liu, however, couldn’t find time immediately on his schedule for Bloomberg.  Somebody’s still angry.

Bloomberg himself has admitted that some public annoyance with his candidacy contributed to his narrow margin of victory. People were clearly put off by his extraordinary personal spending in the campaign, his ultimately successful effort to repeal the term limits bar that had been passed by public referendum in 1993 and confirmed in 1996, as well as his roughness during this campaign towards his opponent.  Rarely at a loss for words, Bloomberg responded to these charges with a somewhat humbled, “Well, you know, I’m – maybe – I’m sure there were some.”

Michael Bloomberg famously made a fortune with his economic news service and the ubiquitous Bloomberg machines – computer terminals – that reported on a host of economic, stock market and other commercial data and that became an absolute necessity for financial services businesses.  But then the public service bug bit and Bloomberg sought public office to see if he could put his much-vaunted business acumen to work on fixing the city he said he loved.

Despite spending some $90 million on this campaign, Bloomberg still lost wide swathes of New York City’s voters to his opponent, William Thompson Jnr, including two of the city’s five boroughs – the Bronx and Brooklyn. Observers already are saying that this close win may well mean Bloomberg will face more opposition on a range of different things from the City Council and the New York State Legislature, now that it is clear Bloomberg is mortal.

Still, with this third term win, and as only the fourth mayor to do so in over a century, Bloomberg joins the company of a legendary former mayor like Fiorello LaGuardia (after whom the airport was named, yes). LaGuardia was also a non-Democrat whose terms of office helped define an era in New York City.

In his first two terms, Bloomberg championed improvement in public schools, after gaining administrative and political control of the city’s public school system, pushing for public health measures (banning smoking and trans fats) and achieving an increase in the property tax to cover the city’s budgetary deficit.

While he was still a business tycoon, Bloomberg famously told friends only four other jobs in the world could possibly lure him from his company, Bloomberg L.P.: president of the United States or of the World Bank, secretary general of the United Nations or mayor of New York.  While three of these may not happen, he’s now scored a hat trick with New York City.