A Gordhan-Nyanda standoff over the SABC. Result? You lo...

A Gordhan-Nyanda standoff over the SABC. Result? You lose 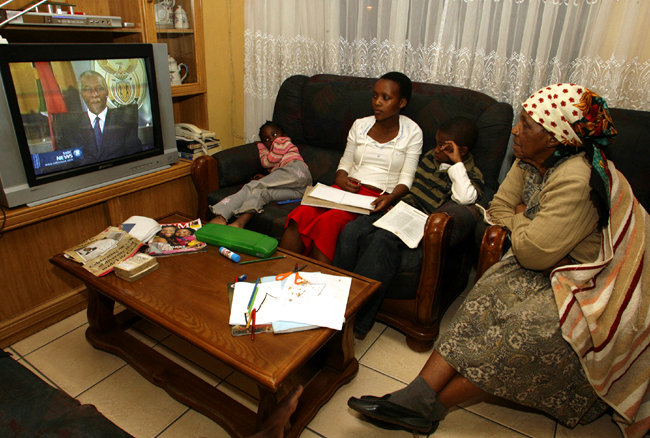 The Department of Communications appears to be emerging as the first institution to mount a direct assault on the authority of the Finance Ministry, proposing in legislation a direct tax which would double the SABC licence fee.

In an era of huge and mounting costs and massively declining revenue, the Finance Ministry has been loathe to promise external organisations new funds, so the Department of Communications has apparently attempted to short-circuit the process by sneaking a new tax into legislation.

The new tax takes the form of substituting the existing SABC license fee with a general personal tax. Business Day quotes Department of Communications director-general Mamodopi Mohlala as saying will increase personal taxes by “a maximum 1%”. It appears in the Public Service Broadcasting Bill.

This doesn’t sound like much, but a 1% increase in personal tax would net the SABC around double what it is getting now from license fees.

Mohlala justifies the tax on the basis that it’s a more efficient way of collecting the SABC license fee, which huge numbers of television viewers just don’t pay. Why huge numbers of South Africans don’t pay is a matter of dispute, but it does not seem impossible that they are not satisfied with the service, or alternatively, they just can’t afford it.

At the moment the SABC board is appointed by the parliamentary communications committee, and the funding of the institution is more or less at arm’s length. Funding the organisation directly out of government coffers makes the SABC effectively an arm of government – although cynics might argue that it has been that already.

For example, the SABC has four reporters assigned to covering the Presidency, an indulgence that most news managers around the world would consider gratuitous even for the most authoritarian of government news gathering systems.

Because the SABC only partly gets its income from the license fee, its income is also dependent on commercial advertising sales, and due to the recession and general mayhem that have enveloped SABC in recent years, this income has plummeted. Former communications minister Ivy Matsepe-Casaburri noted earlier this year that R400-million would not be forthcoming because of “unforeseen cancellation of advertising expenditure”. She said the SABC was not “in crisis” although it’s clear now it was and it is, since a host of locally produced television productions have just disappeared.

Earlier this year, Gordhan wrote a letter to Minister of Communications Siphiwe Nyanda in response to an application by the SABC for a R1,8 billion state guarantee. Although Gordhan said government was willing to help, and Gordhan provided R200 million in stop-gap funding, Gordhan basically said ‘no’ to the bigger request. According to the Mail and Guardian, the letter said that the SABC “ needed to sort out its own current shortfalls”.

Nyanda’s response has been to publish legislation which adds a tax to the personal tax category, raising the question once again of who carries the ultimate responsibility for government expenditure – the finance department or the department concerned. This would be egregious enough, but the Communications Department is apparently making a stab at increase its funding at the same time.

The existing SABC license costs R250 a year, which is already a hefty increase over the R200 it charged last year.

Personal income tax for the 2009/2010 financial year is estimated to come in at R203 billion, meaning at its maximum, the tax would net R2 billion for the SABC. Business Day reports that the SABC in its 2007/2008 financial year got R822 million from license fees.