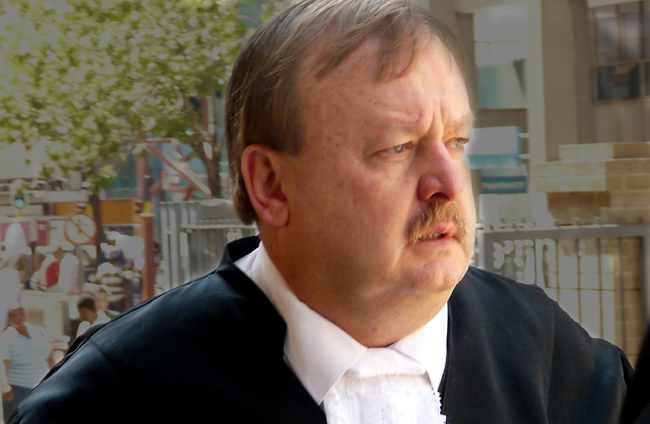 Seasoned silk Jaap Cilliers attempted to prove 'bias' on the part of Judge Meyer Joffe in example after example on Thursday, but each time the judge gave back as good as he got. Are stall-tactics now part of Selebi’s strategy?

If Judge Meyer Joffe does eventually decide to recuse himself from the bench in the corruption trial of former top cop Jackie Selebi, it won’t be because he declined to put up a fight. Court 4B of the South Gauteng High Court was a veritable boxing ring on Thursday morning, with Joffe and defence counsel Jaap Cilliers trading legal jabs like heavyweights at a title bout.

It was a hostile affair from the moment the gloves touched. Cilliers put it to Joffe that he was bringing the application with much difficulty and the utmost respect, to which Joffe dryly replied, “I’m sure.”

Cilliers then attempted to establish the parameters of the argument. The test in such a case, he said, is whether there has been in the mind of the applicant “a reasonable apprehension of bias.” The test is objective, Cilliers added, and the onus is on the applicant – in this instance, Selebi – to prove the prejudice.

Joffe came back at Cilliers with a series of questions designed to ascertain whether Selebi’s standing as former national police commissioner should have any bearing on the “reasonableness” of his apprehension – the judge was asking, in other words, whether he should treat the application as that of an ordinary man.

“The accused is in no better position than a normal intelligent accused,” said Cilliers. “There is no indication that he has got legal qualifications.”

If Joffe was unconvinced by this, his face didn’t show it. But his impassiveness was in marked contrast to what would occur a few minutes later, when Cilliers asked the judge why he did not interject when the State’s chief witness, Glenn Agliotti, admitted to lying to the court. Cilliers’s contention was that the prosecution should have already acknowledged the fact that their witness was lying, and that the judge should have censured them for not doing so.

“There’s been no formal attack by the defence on the prosecution in terms of them continuing to prosecute the matter,” Joffe forcefully interjected. “Why not raise the objection at the time? Why take me to task when it is your duty to raise the objection?”

Joffe referred Cilliers to the court record, and got Cilliers to admit that there had been no formal objection. The defence counsel, however, persisted in his line that the judge had shown bias towards the prosecution, returning to the matter again and again.

“What I’m trying to come to terms with is what you expected me to do,” said the judge, his anger now fully on display. “How do you take umbrage with me when it is your job to object?”

The next point Cilliers raised was similar in intent, although this time it had to do with Joffe allegedly allowing State prosecutor Gerrie Nel to withhold documents from the defence.

“Mr Cilliers, how long have you been senior counsel?”

The following thirty minutes was given over to a heated exchange between Joffe and Cilliers regarding the admissibility of a secret videotape leaked to City Press, which neither the defence nor the prosecution had seen. At the time, Joffe had voiced his concern that someone was trying to influence the proceedings of the court.

Said Cilliers: “M’lord, with respect, why…if someone intended to influence proceedings, would they not give such material to me?”

“I can’t answer that,” Joffe retorted. “I am quite satisfied with the concern I have raised.”

“M’lord, we disagree with that.”

After a few more skirmishes – one of which involved Cilliers complaining about the judge’s “rudeness” – State prosecutor Gerrie Nel took the stand to oppose the application.

Nel, in arguing that the move for recusal was “weak” and had “no real merit,” suggested that the defence was attacking him rather than the judge. He referred to the defence team’s assault during trial proceedings on key former members of the National Prosecuting Authority, and said he’d expected to be next.

Nel also quoted Harvard law professor Alan Dershowitz, who once remarked that in defending a guilty party, the best defence is to blame the government.

Joffe will announce his decision on Friday, when court resumes at 11.30am. The big question, should he choose not to recuse himself, will be whether the defence team accepts the outcome or takes the matter on review. The latter option is likely to result in a postponement of this trial for months or even years – by which time Joffe may well have retired.