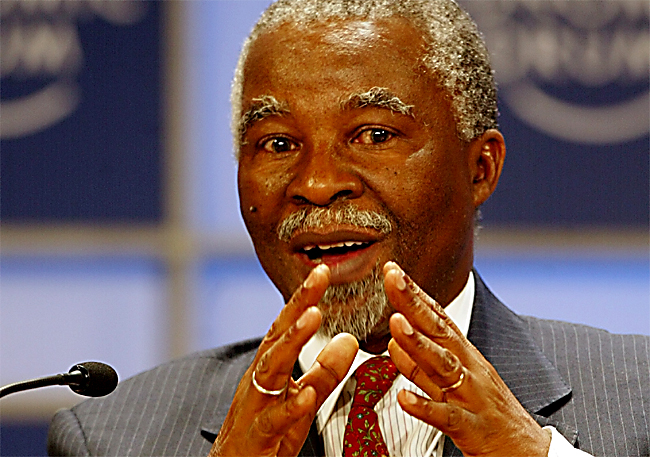 Thabo Mbeki finally starts to grant interviews again. Has he realised history might forget him?

Being in the public spotlight is not former president Thabo Mbeki’s default happy place.  He’s famously contemptuous of the South African media, occasionally reading the Business Day, but generally only giving  interviews to the foreign press.  He only really broke with tradition during the 2004 election campaign, when he was pictured sitting on the floor of a hut, listening, almost intently, to what village elders had to say.

So it’s something of a surprise that he’s suddenly stirring, like the political giant he once was.  A month ago, he gave brief interviews to Eyewitness News and eTV.  During the EWN interview, he was careful with his words and, as the interviewer, I had to tread very carefully to get him to say something on the record about his recall.  At one point I made him a promise that I wouldn’t follow up on a question, before asking him fairly directly about what the country had “learnt about leadership during that time”.  If it had been phrased any less carefully, he was certain to evade the issue completely.

Now suddenly, he’s been more forthright in the Sunday Independent.  He’s spoken of his “hurt” at the Nicolson judgment, and how “it made him feel bad”.  That’s right, Mbeki spoke about how he felt and actually used an emotive word in public.  It’s possibly the first time we’ve ever seen him do that.

Mbeki’s been very quiet domestically over the last few months and after the recall he seemed to disappear.  He popped up briefly for President Jacob Zuma’s inauguration, and then disappeared again.  He was still active in Sudan and Zimbabwe, and that seemed to suit him just fine.  But now he’s on the offensive again.  This has possibly been sparked by the fact that he is not really accepted by anyone as the person driving any of the processes in Zimbabwe.  Since Zuma became president, Morgan Tsvangirai comes to see him, not Mbeki.  Mbeki’s name hasn’t even been mentioned during the latest crisis in Harare. This means he has loads of time on his hands, sitting in his mansion in Killarney.

That has probably led him to a conclusion that he’s in danger of being written out of history.  And the only way to stop that is to jump back in.  It’s a process very familiar to watchers of US politics recently. Dick Cheney, the famously inaccurate handgun of George W Bush’s presidency, was not the easiest person to pin down for an interview.  Now, as he’s watched Barack Obama turn US foreign and domestic policy around, he’s realised the only way to stay a part of the game is to actually play it.  Hence his comments last week accusing Obama of “turning the gun on our own guys”.

For Mbeki, it’s slightly more difficult.  For a start, he doesn’t have around 40% of the nation in support of him, or his views.  Zuma rules the roost now, and if there was a direct presidential election between the two of them tomorrow, Mbeki would be lucky to get about 10% of the vote. Cheney has to deal with an image of someone who doesn’t care about the rest of the world, who’s in it for business, and who is willing to protect his friends.

Perhaps the biggest claim Cheney has to cope with is that he abused his power to further his own ends.  He doesn’t have the cool clear words of a judge against him. Mbeki does. While the Nicolson judgment was overturned, many people still believe it was bang on about his behaviour.

The very timing of this interview is also interesting.  It’s well over a year now since Mbeki was recalled.  Perhaps the broadcast interviews he did were part of testing the water, before launching through one of his more favoured vehicles, the Independent Group (he’s always got on well with its owner, Tony O’Reilly).  What was published on Sunday is also just a taster, really.  Perhaps on his suggestion, or perhaps because the paper wants to advertise its own content a week ahead of time, more will be revealed next Sunday.

There is another aspect to consider.  The Selebi trial is under way in the South Gauteng High Court. Perhaps Mbeki is aware that some of what could come out may be less than flattering to him.  It won’t all be about the size of his shoes.  He’s got to start improving his image now, to get his retaliation in first. And with every passing day, that need is becoming ever more obvious.