The Arch is 78: happy birthday from all of us!

The Arch is 78: happy birthday from all of us! 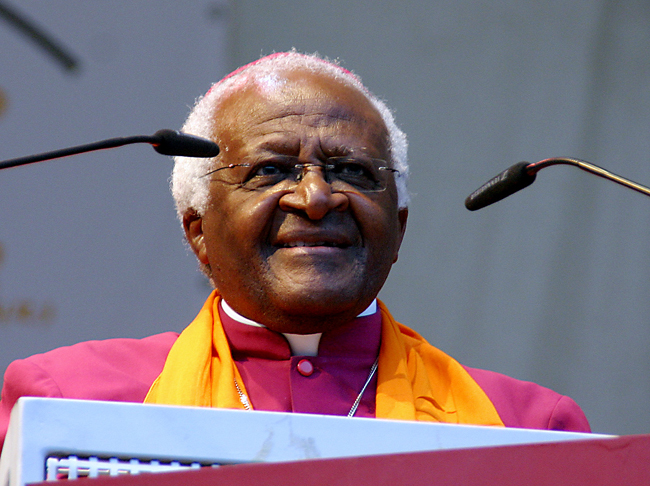 He continues to be an outspoken critic of oppression, wherever it is to be found.

Archbishop (emeritus) Mpilo Desmond Tutu is 78 today.  Born in Klerksdorp, the “Arch,” as he is familiarly and affectionately known by South Africans, was one of the country’s leading anti-apartheid activists, the chair of its iconic Truth and Reconciliation Commission, and a noted theologian.

First trained as a teacher, he resigned to protest the Bantu education system and elected to study for the priesthood instead.  After study at the famed St. Peter’s Theological College, he became an Anglican priest in 1961. After further study in the UK, Archbishop Tutu returned to South Africa to teach at the Federal Theological Seminary at Alice in the Eastern Cape. In protest against further moves by the apartheid government, he moved to Lesotho to teach at the university college there.

After a second stint in the UK, he returned to South Africa in 1975 to become the head of St. Mary’s Cathedral and the Anglican Dean of Johannesburg. A St. Mary’s parishioner from his time there recalled he was “funny, aware, and very spiritually connected” to his congregation.

Between 1976 and 1978, Tutu was the Bishop of the Anglican Church in Lesotho and then the Secretary-General of the South African Council of Churches. Over the years, despite having been arrested and prevented from travelling abroad, he gradually became a symbol of morally principled resistance to the apartheid regime.

In 1984, he received the Nobel Peace Prize award for his untiring efforts in calling for an end to minority rule in South Africa, the un-banning of liberation organisations and the release of political prisoners. Two years later, he became head of the Anglican Church of the Province of Southern Africa (1986-1996) and Bishop of Cape Town.

Following the end of apartheid, Tutu became internationally renowned for chairing the Truth and Reconciliation Commission. The image of him breaking down and crying as he listened to horrific testimony is indelibly etched in the minds of those who watched South Africa’s reconstruction.

As South Africa moved from its apartheid past, he coined the phrase “Rainbow Nation” to describe the possibilities of an interracial harmony in South Africa.

Apartheid over, the Archbishop continues to speak out about injustice and oppression internationally. He has been firm in his condemnation of the military junta in Burma, the Mugabe regime in Zimbabwe and other repressive governments. For many years, he was also a vigorous critic of the South African government for its past failures in dealing effectively the AIDS epidemic.