It is Angela's Germany now

It is Angela’s Germany now 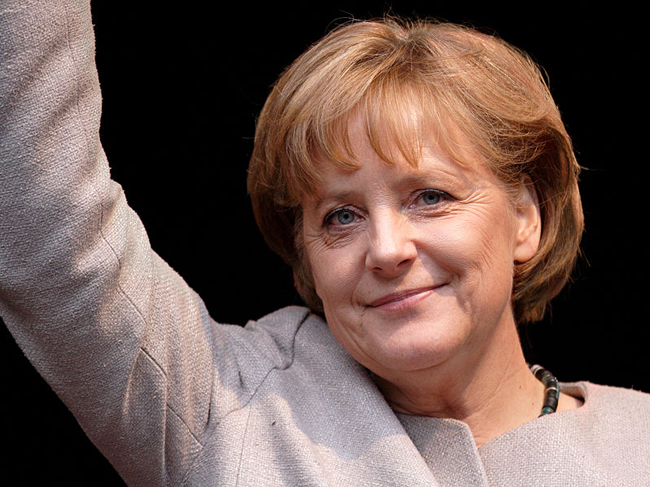 Following her election victory, German Chancellor Angela Merkel has vowed to press ahead quickly with forming a new centre-right government, in place of her current broad – but sometimes awkward -- coalition with the Democratic Socialist Party. By Brooks Spector

­The extent of her victory gives the Christian Democratic Union’s (CDU) leader her second four-year term and a chance to form a coalition government with the pro-business Free Democrats.  Promising swift action, Merkel has told the media she aims for discussions with the Free Democrats “in the coming days and weeks.”  Merkel is widely expected to name the leader of the Free Democrats, Guido Westerwelle, as her deputy and foreign minister.

Some analysts are already suggesting that a pro-business coalition may actually put her new government into a potentially difficult spot in a country used to its generous social welfare state, and reluctant to face big changes.  The influential Sueddeutsche Zeitung newspaper has already opined that “The golden times for Angela Merkel are over. If she continues to play the role of mother of the nation, she will have difficulties with the Free Democrats and her own party. If she becomes an iron lady, she loses her reputation with the people.”

Merkel’s CDU and its Bavaria-only partner, the Christian Social Union, won 33.8 % of the overall vote and the Free Democrats captured 14.6 % – together enough to ensure a majority in parliament. Merkel’s former partner, the Social Democrats, took 23 %. The Left Party had 11.9 % and the Greens 10.7 %.

Despite this decisive win, her own party’s share of the overall vote was its second-worst since World War II and some analysts speculate she may face difficulties with the more traditional wing of her own party. Moreover, in partnership with the Free Democrats, which was the big winner of this election as they gained 4 % more votes than ever before, she will face “stronger pressure from industrial lobbyists, from her pro-business partners, as well as from the conservatives within her own party,” the Berliner Zeitung commented.

The poll gives the CDU 239 seats and the FD 93 in the lower house – resulting in a comfortable center-right majority of 332 seats to 290. The SDP won 146, the Left Party 76 and the Greens 68.  Together, the tally for the anticipated new coalition adds up to less than half the total number of votes, but will yield a majority of the actual seats in the German parliament because 6 % of the votes went to parties finishing below the 5 % threshold needed to win seats.

In common with most global economies, Merkel’s Germany has been badly hit by the international economic downturn.  Even though it showed a modest level of growth in the second quarter and business confidence indices are starting to rise, GDP is projected to fall 5% — or more – the poorest performance since the war.

Merkel will finally have a real chance to carry out the liberalizing economic plans she proposed when she first ran for chancellor four years ago, with tax relief, simplification of the tax code and a possible extensions that nuclear power plants can continue to operate.  But rising budget deficits as a result of the economic crisis have drastically limited the kind of tax cuts the would-be coalition partners can actually carry out.

Internationally, Germany’s continued participation in the NATO-led Afghan mission is probably its most difficult problem. Al Qaeda and the Taliban recently delivered messages aimed at Germany, promising retaliation if the 4000+ German troops were not withdrawn. Newspaper editorials are already calling on Merkel to come with clear thinking on the Afghan deployment.

Merkel is unified Germany’s first chancellor from the former communist east. As a protestant north German, Merkel, age 55, broke the leadership mould of the Christian Democrats (CDU), traditionally dominated by Catholic west German men.  She is divorced, although she has kept her first husband’s surname.  Former Chancellor Helmut Kohl was her mentor and it is said that she cowed many in her party by publicly criticising him in a funding scandal, and then replacing him.

After being elected in 2005 she entered into coalition with her rivals in the Social Democrats (SPD), including her 2009 election challenger, and foreign minister, Frank-Walter Steinmeier.

Born in Hamburg, Angela Merkel was only a couple of months old when her father, a Lutheran pastor, was given a parish in a small town in East Germany. She grew up in a rural area outside Berlin in the communist east, and showed a great talent for maths, science and languages. She earned a doctorate in physics but later worked as a chemist at a scientific academy in East Berlin.

At the age of 36, she became involved in the burgeoning democracy movement in 1989 and, after the Berlin Wall came down, she got a job as government spokeswoman following the first democratic elections. She joined the CDU two months before the reunification of Germany and within three months she was in the Kohl cabinet as minister for women and youth.

She is married to a chemistry professor from Berlin, Joachim Sauer. The couple do not have any children.

Guido Westerwelle has moved to the front tier in European politics after his party scored a resounding success in German elections and he will now negotiate the terms of engagement with Chancellor Merkel.  One of those terms will probably be Mr Westerwelle’s promotion to foreign minister.

His antics have included appearing in Germany’s Big Brother house and painting the figure 18 on the soles of his shoes (the vote percentage he targeted in the 2005 election) and he has broken new ground in becoming the first openly gay leader of a major German party.

He is a trained lawyer and is respected for his debating skills and his market-friendly party is committed to cutting taxes, welfare payments and the size of government.  It also wants the US to remove nuclear warheads stationed on German soil, to reverse Germany’s rollback of nuclear power and is against punitive cuts in greenhouse gas emissions.