November was a really bad month for the US dollar, which depreciated notably against the Euro, the Australian dollar and virtually all emerging market currencies (Argentina being an exception).

For the second month running, the South African rand was among the best performers for emerging market currencies, strengthening by 7% against the greenback. The Brazilian real came in first, with an appreciation of almost 8%. Since its low early in April, the rand has gained 25% against the US dollar and has clearly shaken off any effects relating to sovereign credit downgrades (in the same fashion as Brazil when it was also downgraded to sub-investment status at the end of 2015). 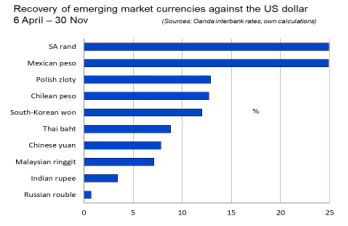 Despite concerns over South Africa’s rising public debt, it should remain below parity to GDP until a fiscal consolidation strategy starts paying off in a couple of years’ time. Fiscal challenges are not unique to South Africa, with a host of countries experiencing the negative effects of declining tax revenues due to the pandemic.

Prospects for greater geopolitical stability in the wake of Joe Biden’s election victory in the US, combined with an element of capital market euphoria over three different successful Covid-19 vaccine trials, created a strong risk-on sentiment in November. As a result, global investors started to switch off their preference for so-called safe haven assets and flocked back to higher-yielding bonds and equities in emerging markets.

Notwithstanding a resurgence of Covid-19 infections in the world’s largest economy and in Europe, most of the listed companies on US stock markets also benefited from the perception that an effective vaccine would be available early in 2021. A number of prominent hi-tech brands proved to be an exception, but they had enjoyed a surge as a result of the “stay-at-home” syndrome induced by Covid-19.

Recent medium-term forecasts for the rand are likely to be proven horribly wrong as a result of the consistent recovery since April, which has gained considerable momentum over the past two months, despite volatility being omnipresent.

It is always useful to delve into history in order to better inform likely future exchange rate trends. In the case of the rand, three different periods of sustained recovery after abnormal weakness over the past two decades suggest that a level of between R14.50 and R15 early in 2021 may be in the offing. 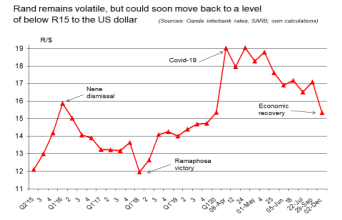 An underlying cause of all of the rand’s recoveries from grossly undervalued positions is the phenomenon known as an “automatic macro-economic stabiliser”, a variant of which is also evident in the area of public finance. In the domain of international economics, this stabiliser operates to ensure that any lengthy period of currency weakness ultimately leads to enhanced export earnings (in domestic currency terms) while simultaneously acting as a disincentive for imports. The latter has a two-pronged effect, namely to also stimulate import replacement of manufactured goods, some of which may be exported.

The net effect is to eventually strengthen the current account of the balance of payments to such an extent that currency appreciation becomes inevitable — hence the reference to the term “automatic”, as it obviates the need for any central bank intervention (which has been proven to be ineffectual).

A standard caveat for the functioning of such a stabiliser is that the relevant economy should at least possess emerging market status, with a critical mass of economic diversity into manufacturing and services industries, a diversified taxation base and the presence of well developed financial markets. South Africa comfortably meets these criteria. BM/DM