The level of economic growth South Africa needs to progress

Instead of tracking what economic growth SA is getting, we should be asking a different question: What kind of growth does SA need?

Much ink has been spilt in the analysis of Finance Minister Tito Mboweni’s recent supplementary Budget, in particular to the revised GDP growth estimate of -7.2% in 2020 (which seems too optimistic against private-sector forecasts of closer to -11%) and the explosion in government debt to 81.8% of GDP in the current year. It is likely that the importance of the denominator in the latter calculation explains the optimism of the former.

“Need” is a path choked with weeds to walk down, and it is worth approaching any calculation with caution — many politicians will tell you that SA needs universal basic income, free healthcare for all and a dozen new SOEs for good measure — which would necessitate far higher rates of growth than the need of just being able to scrape together enough to feed the population.

So, let us side-step the weeds and frame the question more intuitively in terms of GDP per capita — a useful (if imperfect) measure, implicitly encompassing the welfare, living standards, institutional quality, governance and stability of a country. In other words, all the factors we are trying to maximise in a needs question. It’s a crude measure of the progress of a country through time and space.

Tracking SA’s GDP per capita (GPC) is informative. From 1990 to 2000 in real (adjusted for inflation) terms it picked up only very slowly. Then from 2000 to 2008 GPC rose strongly and relentlessly, interrupted by the financial crisis which led to a one-year contraction. From 2010-2014 GPC picked up again but at a far slower pace, struggling to make headway in an eroded economy. Finally, from 2014 onwards this eroded foundation could no longer hold, and GPC has declined ever since (and will likely continue to do so until at least 2024). 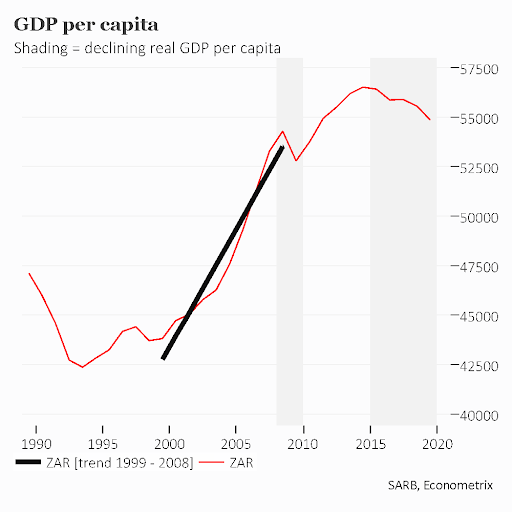 Let us base our needs answer on this outcome, then — it would be hard to argue that this period 2000 to 2008 was not the economic halcyon day of democratic South Africa. Government still largely had a measure of private-sector trust, the middle-class was growing (thanks to government employment), real incomes were rising, and a debt-fuelled consumption boom meant new cars, houses and clothes were in reach of whole new socio-economic strata.

Property prices were soaring, and new infrastructure meant cities were changing their faces. After serious weakness in 2001, the rand had come roaring back and would stay below R8/$ as SA attracted international investment and improved credit ratings. Unemployment was declining from 2003 to 2008 and government, amazingly, was managing to balance its books.

The quality of growth was questionable and the seeds of much future erosion and mismanagement were being sown, but at the time many South Africans would have agreed their lives were getting measurably better.

So let’s go back to the improving GPC trends over that period and extend them forward in time, pretend that we never had to sleep in the bed of economic mismanagement we were making and that the financial crisis and Covid-19 were all figments of the imagination. What level of economic growth do we need to bring those halcyon days back?

Assuming this process of restoration occurs over the next decade, we can calculate that real GPC will need to improve by 45% by 2030. In order to achieve this, and assuming a population growth rate of 1.5% per annum (average since 2000), real GDP growth needs to be in the order of 5.0% per annum for the next decade. Benchmarking this internationally, this improvement would roughly elevate South Africa’s international standing to levels currently seen in Botswana, Bulgaria and approaching those in China — a realistic assessment.

This seems like a high required level of growth, but we can test the same problem against a back-of-the-envelope calculation from a government expenditure approach under the following assumptions:

Assuming a tax buoyancy ratio of say 1.0, so tax revenues grow at the same rate as the economy, we find that the minimum required real growth calculated via this method comes in at around 5.5% annually.

By either (admittedly rough) hypothetical method, consistent growth in the region of 5.0% over the medium term is required to push progress in South Africa — improve the welfare of society, increase living standards, maintain government expenditure levels in inflation-adjusted terms on healthcare, schooling, social support and other institutions such as the police and the court systems.

Of course, embedded in any growth measure is the assumption that growth benefits are broad-based and restorative of structural inefficiencies. Much growth over the past two decades has come off the back of a larger public sector (which is not an economically productive sector beyond a certain point) and firm growth in the tertiary (financial and consumptive sectors) which do little to create the sort of large-scale employment and deep restoration of investment levels the country “needs”.

Fortunately, some of these positive benefits are implied in such a strong GDP growth rate in an almost paradoxical way — that is, such rapid growth needs huge structural reforms and huge structural reforms will be facilitated by such rapid growth. Growth so strong is only achievable if there is significantly more participation of the labour force in the economy. Institutions would need to improve to facilitate rational regulations, an efficient government and improved education. Costly SOEs are done away with and the political sphere becomes less volatile, to support improved confidence and FDI.

Faster growth also sets off a virtuous cycle — more tolerance towards democracy, a shift away from identity politics as inequality is reduced, less social support and lower crime levels as jobs are created. Government finances also get a boost as tax revenues increase and borrowing costs fall as credit ratings improve.

Of course, levels of growth around 5.0% per annum for the medium-term are unrealistic given the structural make-up of South Africa’s economy and its place in a slowing global market. We are not unique here — many countries in the world find themselves in a similar situation. What these calculations do provide is a framing benchmark for understanding what level of growth South Africa “needs” to progress as a country. Anything below this and we progressively lose ground both against our own historical improvements and against the ability of government to maintain its current expenditure levels.

With this framing in mind, it is easy to see why slower growth, like the type we are expecting for the foreseeable future, will continue to reduce the average living standards of all South Africans, undermine the funding of institutions and infrastructure of the country and, without dramatic readjustment of government’s expenditure (as Minister Mboweni is proposing), is likely to end with a sovereign bailout. BM/DM

Jeffrey Dinham is a senior economist with Econometrix.

Jeffrey Dinham is a senior economist with Econometrix.