Moody’s rating decision in March… is much ado about nothing

It has been difficult to ignore the post-Budget 2020 pundits who have been preoccupied with whether Finance Minister Tito Mboweni will avert a possible rating downgrade by Moody’s in March. This is the wrong question — the right question is: what will happen if there is a rating downgrade?

Even before the Budget speech, prevailing sentiment on streets across South Africa — amid ongoing load shedding — was more negative than positive.

Moody’s itself recently more than halved its 2020 growth forecast for South Africa to 0.7%, from its September 2019 forecast of 1.5%. Considering that Moody’s is the only one of the three major international rating agencies (the others are Standard and Poor’s and Fitch) to maintain an investment-grade rating on SA’s sovereign debt. One more rating downgrade by Moody’s will affirm South Africa as a sub-investment destination for international capital investors.

Moody’s is expected to announce a review assessment of SA in March, just on the heels of its decision in November 2019 to revise its outlook on South Africa to negative (from stable).

The good news for South Africans is that regardless of what Moody’s decides, the economy and the financial markets have adjusted to the sombre reality of a potential downgrade. Sure it might be a tough pill to swallow for those who follow these things, but amid media reports that have been blowing this issue out of proportion for years, the sobering news is that South Africa is already considered to be a sub-investment grade destination for foreign investors and has been for some time. That reality was already priced in around mid-2018, and we have a greater potential for bond prices to recover more than recede from current levels despite Moody’s decision in March.

However, there is a silver lining if SA Inc is downgraded in March — hopefully government will take the necessary steps to rein in the country’s massive debt, aggressively implementing growth strategies and plugging drains on our economy, for example State-owned companies such as Eskom, that were explicitly cited as risks to the economy by Moody’s in November. South Africa is a proud nation and I believe that we will rally to fix our problems.

In this regard, labour must recognise that it has a significant role to play. All of South Africa needs a social compact between government and labour in this regard. The question about whether Mboweni will be successful in this endeavour and establish this social compact is another matter altogether.

That aside, I would argue that we might be witnessing a policy shift where government is reining in consumption spending — which has been central to its spending policy, resulting in explosive growth in the public sector wage bill after the last global economic crisis (2008-2009) that will continue to burden future generations — to a policy more geared towards investment and greater bang for buck. However, it is still early days to make an informed call. If this is indeed the case and government does follow through with action, global goodwill towards SA will surge and it will be rapid.

We have been asked by many clients about what to expect around SA’s rating in March. Vunani Fund Managers does not forecast events or risk drivers. We merely infer the risk premia from bond prices, including how much of a downgrade is already priced by the market.

Therefore, we don’t make judgment on the probability of a downgrade but simply infer its pricing. Based on prevailing data, it is clear that a sovereign downgrade is already in the price judging by where South African sovereign spreads and government bond yields are trading relative to peers and the US curve respectively. The following charts illustrate the point. 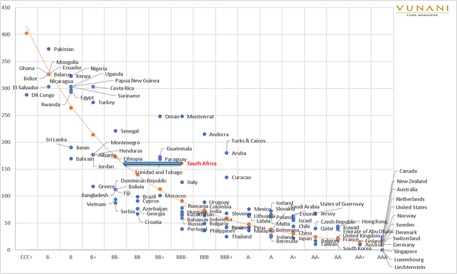 To better understand how investors price South Africa’s risk, we use Credit Default Swaps (CDS) price spreads. A CDS is effectively an insurance policy that pays out in the event that the underlying financial instrument (in this case sovereign bonds) default or experience a similar event.

The implied rating using South Africa’s five-year CDS spread relative to All Countries/Peer or Middle-Income Group of Countries show that SA sovereign debt is priced at a spread consistent within the BB band — which is a sub-investment rating. 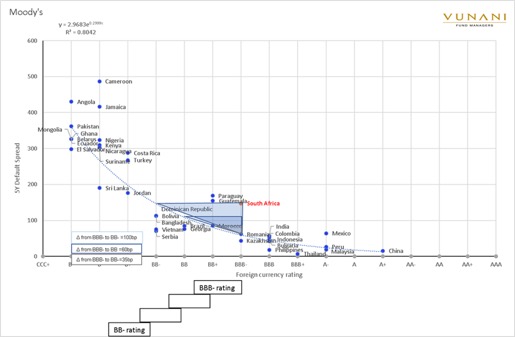 Chart 2 conveys a similar message when we use S&P or Fitch ratings — the only difference is that SA’s foreign currency rating by Fitch is BB+ and by S&P it is BB, meaning that S&P is the most punitive of the three rating agencies. The CDS market (shown above) is more punitive than the S&P rating.

The Bond Market, viewed through the Constant Maturity 10-year Government Bond time series, is pricing in a more punitive rating than the CDS Market — at BB-. The negative rerating of SA’s sovereign bonds appears to have started mid-2018. The current 10-year benchmark bond, R2030, is priced at a yield of 9.02 (as at 29/01/2020) which is also consistent with a BB- foreign currency rating.

Regardless of what happens in March, bad news has already been priced in, with limited impact on SA’s asset prices including stocks.

The steepness of the yield curve suggests well-anchored inflation expectations in the near future and increased discounting of further interest rate cuts by the South African Reserve Bank.

South African bonds will be the obvious benefactors from an accommodative monetary policy stance. On the other hand, SA equities which have lagged other emerging markets due to derating that began in 2015 — have more upside potential than down. Local equities, like bonds, have priced in a lot of bad news in recent history — poor growth prospects, downgrade risk, load shedding uncertainty, and fiscal deterioration — and as a result, local equities are trading at relatively attractive Price-to-Earnings ratio to global peers.

A stable macroeconomic environment, attractive valuations, scope for further interest rate cuts and a return to fiscal prudence will be among several catalysts for a strong recovery in equity markets in 2020 — factors that will all have a greater impact than Moody’s rating decision. BM