STATE OF THE NEWS OP-ED 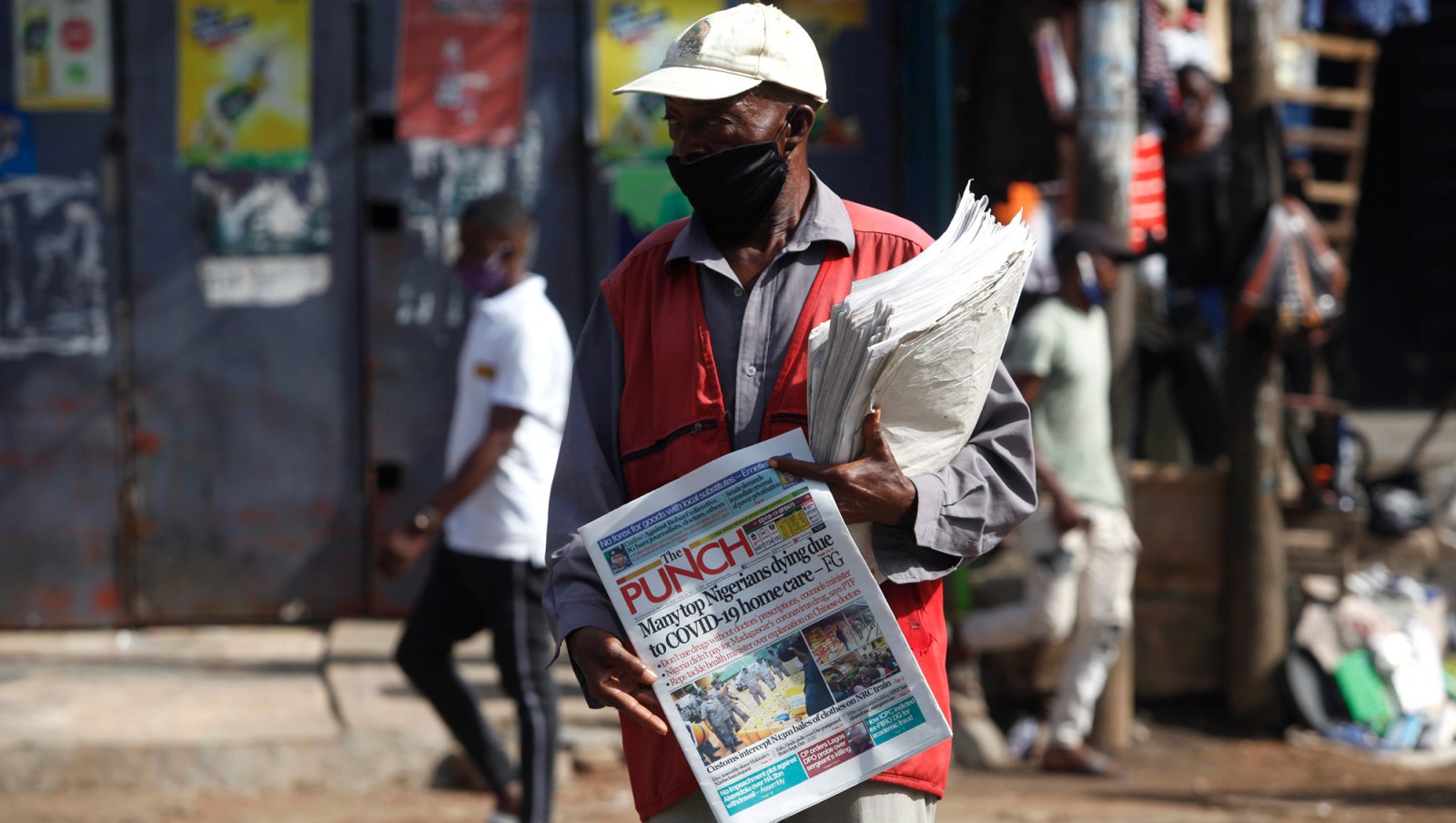 A vendor wears a mask and holds a newspaper along a road in Lagos, Nigeria, 20 May 2020. (Photo: EPA-EFE / Akintunde Akinleye)

It is in lower-income countries where a stronger independent media is most vital. Public newspapers and broadcasters are not the answer. While many countries have national news services, they are usually poorly resourced and seen as propaganda platforms.

Social media was once seen as the disruption traditional media needed. It certainly did disrupt. Trust in democracies and institutions has diminished, misinformation has proliferated, and public debates have descended into shouting matches.

Economically, social media eroded the business models that funded public interest journalism – the style of reporting that holds governments to account and informs the public on the issues that shape lives and enable debate (the vital reporting which, for reference, brought us Watergate, the News of the World hacking scandal, and the Pandora Papers leak).

Without action, we will lose this vital pillar of our democracies, and in some countries, we may already be too late.

The demise began slowly, almost imperceptibly. Consumers bought fewer newspapers, opting for the convenience of online. As consumers moved online, so did the classifieds, the original “rivers of gold” that kept the printing presses running and journalists on their respective beats. As revenue declined, savings were found – journalists and editors were usually the first to go, after which print runs were reduced, or removed entirely.

The Covid-19 pandemic saw revenues decline further – the global loss in revenue for newspapers in 2020 was estimated at $30-million. As revenues decreased, audiences flocked to trusted news brands. The BBC gained an extra 20 million people each week, delivering a weekly global audience of almost half a billion adults.

Outlets also saw unprecedented growth in digital subscriptions. Digital subscribers to The Guardian increased by 43%, while The Atlantic attracted more than 300,000 new subscribers – three times the number it was expecting after raising a paywall.

Read more in Daily Maverick: “Does journalism have a place in contemporary society? This is what young reporters have to say”

After a bumpy start, where audiences looked for opportunities to dodge paywalls, digital subscriptions are helping to plug the revenue gap for many media houses. The New York Times, for example, now boasts 10 million subscribers, with the majority paying for digital products. Critically, the growth in subscribers is delivering profitability.

Subscriptions accounted for $1.4-billion of The New York Times’s $2.1-billion in revenue last year. The Financial Times, which offers a more targeted product, is seeing similar success, with digital journalism revenues equal to all other revenue streams combined. Western outlets remain bullish on growth. The New York Times reckons at least 135 million adults around the world are, or would, subscribe to an English-language outlet.

But it’s a different story in lower-income countries. Last year, Kenya’s largest newspaper, Daily Nation, introduced one of the first metered paywalls on the continent. With an annual subscription of about $7 a year, it is hard to see how digital subscribers will fill a widening revenue gap in the short term.

In low- and middle-income countries consumers lack the disposable cash to spend on digital subscriptions, even if they are $7. Lower literacy levels also mean more people turn to radio and TV for news and information. Meta’s attempt to overcome this challenge was to offer a tailored “Free Basics”, where people could access a limited version of Facebook, along with other websites, without incurring data expenses. Given Facebook is often seen as a major source of misinformation, it is hard to imagine this is leaving audiences better informed.

Read more in Daily Maverick: “Closure of ‘New Frame’ a blow to social justice journalism as yet another newsroom sinks into media’s stormy waters”

But it is in lower-income countries where a stronger independent media is most vital. Public newspapers and broadcasters are not the answer. While many countries have national news services, they are usually poorly resourced and seen as propaganda platforms.

In countries with strong and vibrant media sectors like Kenya and Nigeria, journalists often lack the money to get to press conferences, let alone fund extensive and often expensive investigative pieces.

In countries with weaker media sectors, the impact of journalism is often subdued by government restrictions. In Tanzania, bloggers are forced to pay an annual $900 registration fee and disclose financial backers to the government. In Ethiopia, the government targets national and international press alike. In May 2022 alone, it kicked out The Economist’s Ethiopia correspondent and arrested at least a dozen journalists and workers from private media.

And it isn’t just in Africa where public-interest journalism is struggling. Most major independent media outlets in Russia have closed since the war in Ukraine began. Not even the public broadcaster is allowed to mention the war. Void of accurate and impartial reporting and information, how will Russian citizens hold Vladimir Putin to account?

The evolution taking place among international outlets like The Times and The Guardian give hope that consumers see value in paying for trusted news. But, in low- and middle-income countries, often where we need strong media the most, we have some way to go before strong income streams can be found.

Maintaining a strong public interest media isn’t something to be left for others.

Consumers have a role to play, paying and supporting quality and trusted local news outlets where they can. Donors and NGOs, who are already supporting a range of programmes, need to explore opportunities to collaborate, avoid duplication and enhance existing programmes. For example, is there value in creating more opportunities for media houses to share knowledge and insights on what business models are working, or funding studies to identify new business models that work in low- and middle-income countries?

We must not shy away from this challenge. The continued demise of a free and independent press comes at a time of great disruption globally. A war in Europe, increasing tensions between America and China and the growing impact of the climate crisis only heighten our need to be more united and informed than ever before. DM

Simon Crump is based in Nairobi and has led pan-African communications for a range of international corporate and philanthropic clients including the Bill and Melinda Gates Foundation, Bloomberg, Hyatt, FSD Africa, and British International Investment. He previously worked as a journalist with the Australian Broadcasting Corporation.