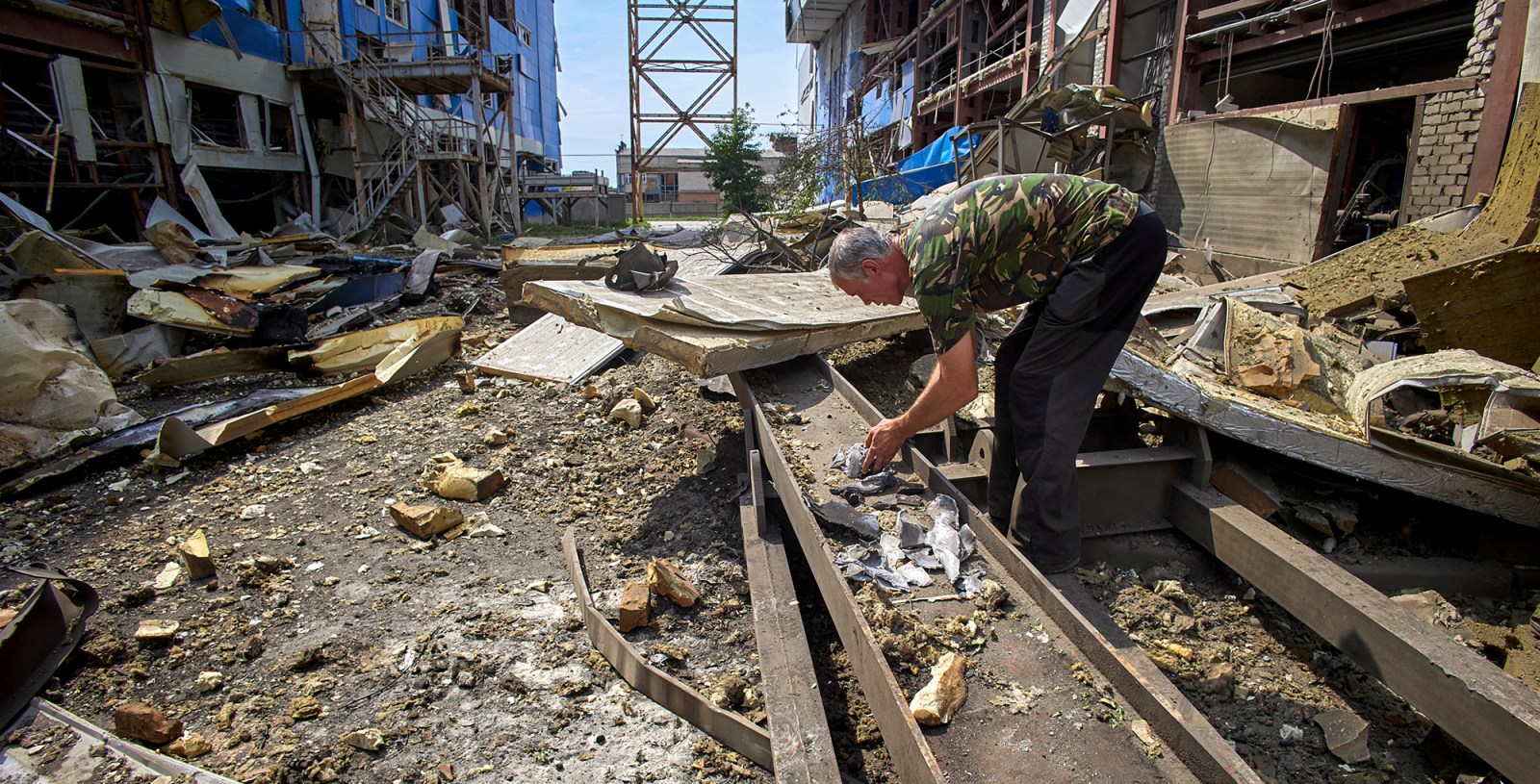 A man collects debris from a rocket near a damaged factory after a rocket hit the small city of Merefa in Kharkiv, Ukraine, on 1 August 2022. Kharkiv and surrounding areas have been the target of heavy shelling since February 2022, when Russian troops entered Ukraine starting a war that has provoked destruction and a humanitarian crisis. (Photo: EPA-EFE / Sergey Kozlov)

Ukraine made its first shipment of grain since Russia’s invasion, a small but crucial initial step towards unlocking the millions of tonnes of grains piling up in the country and boosting global food supplies. Ukraine said shipments from its ports will initially be limited to three vessels a day while safe routes are checked.

Speaking to a United Nations conference on nuclear non-proliferation, US Secretary of State Antony Blinken condemned Russia’s “reckless” threats of nuclear escalation over its invasion of Ukraine. In a statement issued to participants in the meeting, Russian President Vladimir Putin said there can be “no winners in a nuclear war”, which should never be allowed to happen.

Ukraine’s grain shipment triggered a fall in wheat and corn futures, bringing some relief to a tight market. Oil also slumped on the back of lacklustre global manufacturing figures, with West Texas Intermediate briefly slipping below $93 a barrel.

Russia continues to launch air and missile strikes against military and civilian targets. Fighting was under way in most of the southern Kherson region, Ukraine’s military said. Russia shelled Mykolaiv again, following the most significant attack on the southern port city since the war started, according to its mayor. Russian forces may be preparing a new offensive towards Kharkiv even as they are “extremely unlikely” to seize Ukraine’s second-largest city or the region around it, the Institute for the Study of War said.

Russia baulks at US prisoner swap offer as unequal

Moscow is leaning towards rejecting a prisoner swap unless it gets two Russians in return for the two Americans the US wants released, according to people familiar with the Kremlin’s thinking.

The US has called on Russia to free basketball star Brittney Griner and former US Marine Paul Whelan, offering to free convicted arms dealer Viktor Bout. Discussions have been stop-start since June, with Moscow reluctant to agree to a deal it sees as unequal, the people said, asking not to be identified discussing confidential matters.

Russia has not yet supplied a detailed response to the US proposal, another person familiar with the discussions said. The delicate nature of the discussions shows the level of mistrust that has only heightened since Russia’s invasion of Ukraine in February.

Ukraine will limit grain shipments from its ports to three vessels a day for about two weeks, infrastructure minister Oleksandr Kubrakov said on Bloomberg Television.

After safe routes are checked out during this trial mode, grain exports may reach three million tonnes a month in four or six weeks from now, he said.

​The next ships loaded with grain will be leaving the ports of Chornomorsk, Odesa and Pivdennyi after the first one departed Odesa on Monday en route to Lebanon.

Blinken condemned Russia’s “reckless” threats of nuclear escalation over its invasion of Ukraine, warning during the UN non-proliferation conference on Monday that such actions may prompt other nations to pursue their own nuclear weapons.

“The world must reject the spread of nuclear weapons,” the top US diplomat said, beginning with compliance by state parties with the Treaty on the Non-Proliferation of Nuclear Weapons, known as the NPT.

The Russian leader said his nation has always implemented nuclear disarmament treaties it’s signed with the US, according to a statement posted on the Kremlin site addressed to participants in a UN review of a key disarmament pact.

The US, France and the UK called on Russia on Monday to cease its “irresponsible and dangerous nuclear rhetoric” as delegates gather in New York for the 10th review conference of the Nuclear Non-Proliferation Treaty.

Russia’s foreign ministry announced sanctions against 39 British politicians and journalists, including former prime minister David Cameron. The decision is a response to the UK’s continued punitive measures, the ministry said.

Others targeted include the leader of the opposition Labour Party, Keir Starmer, and former Nato secretary-general George Robertson.

Wheat and corn futures fell as the first grain ship since Russia’s invasion left Ukraine. The Razoni, a cargo vessel carrying corn, headed to Lebanon on Monday morning, according to the UN. Ukraine infrastructure minister Oleksandr Kubrakov said there were 16 other ships in the greater Odesa region waiting to sail.

The German government, which came under criticism for being slow to deliver military aid to Ukraine, announced plans in June to provide three Mars rocket launchers with munitions.

Similar systems provided by the US have been critical in allowing Ukraine to target Russian munitions depots deep behind the front lines, a development that’s disrupted the Kremlin’s troops and opened the possibility for a Ukrainian counteroffensive. Reznikov also announced the arrival of four more so-called Himars systems from the US.

The European Commission, on behalf of the European Union, disbursed the first half of a new €1-billion macro-financial assistance for Ukraine, according to a statement. The second tranche will be disbursed on Tuesday.

Kremlin spokesman Dmitry Peskov said the first shipment of Ukrainian corn since Russia’s February invasion of its neighbour is “very positive” and “a good opportunity to test” the agreement reached on freeing Ukraine’s grain exports.

The Razoni, a cargo ship loaded with 26,527 tonnes of maize, set course for Lebanon on Monday morning, according to Turkey, which helped broker last month’s deal with Russia to restart grain exports.

Ukraine is one of the biggest wheat, corn and vegetable-oil suppliers and the loss of exports via its Black Sea ports blockaded by Russia has shaken the global food trade and raised the threat of a global food crisis. DM