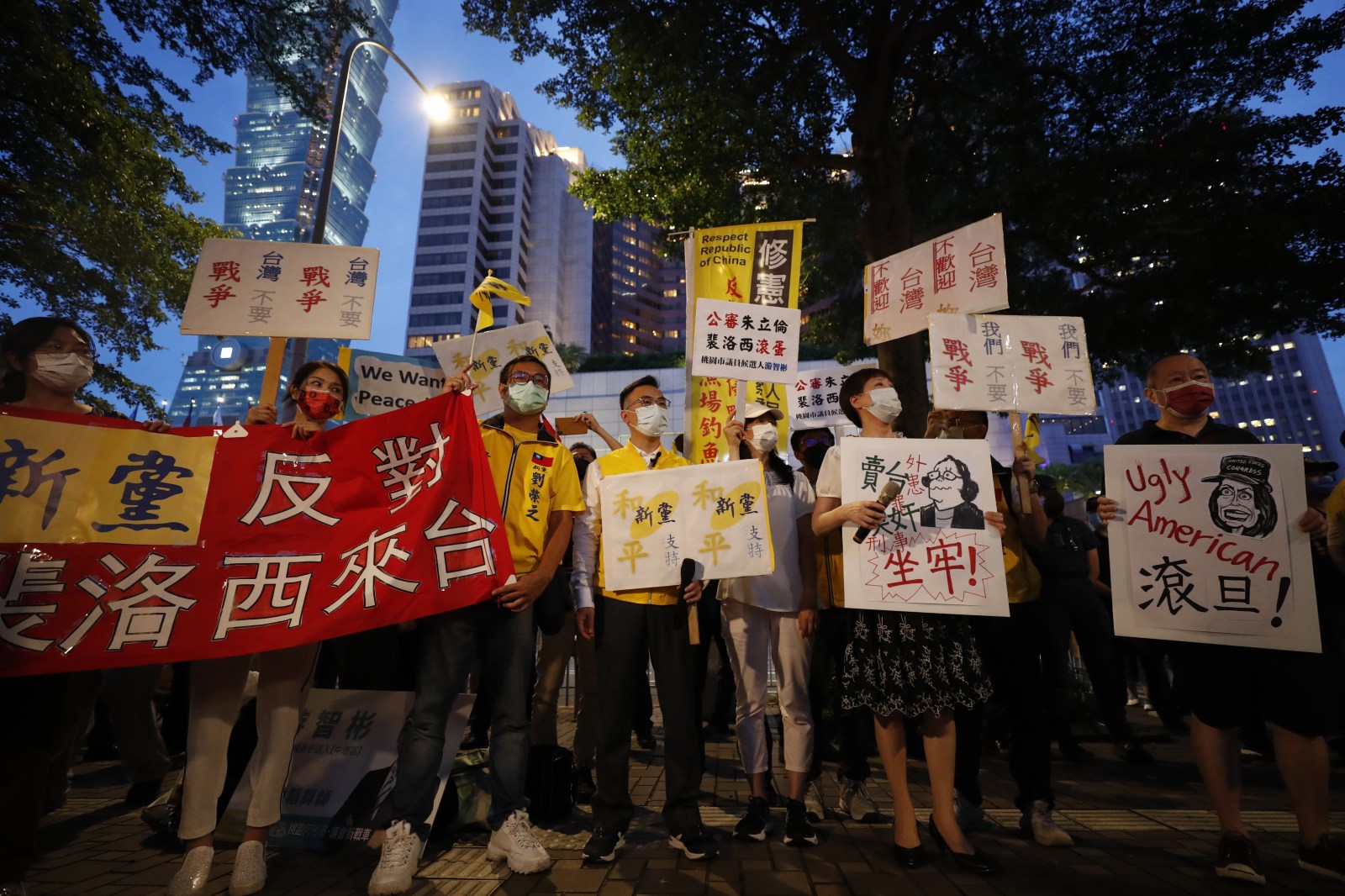 Taiwanese hold placards during a protest against the visit of US House Speaker Nancy Pelosi, in Taipei, Taiwan, 2 August 2022. (Photo: EPA-EFE/RITCHIE B. TONGO)

China has repeatedly warned against Pelosi going to Taiwan, which it claims as its own, while the United States said on Monday that it would not be intimidated by Chinese “sabre rattling”.

The Chinese aircraft repeatedly conducted tactical moves of briefly “touching” the median line and circling back to the other side of the strait on Tuesday morning, while Taiwanese aircraft were on standby nearby, the person said.

The Chinese planes left the area in the afternoon but the ships remained, the person said.

Taiwan’s Defence Ministry said in a statement it has a full grasp of military activities near Taiwan and will appropriately dispatch forces in reaction to “enemy threats”.

China’s defense and foreign ministries did not immediately respond to requests for comment.

In the southeastern Chinese city of Xiamen, which lies opposite Taiwan and is home to a large military presence, residents reported sightings of armoured vehicles on the move on Tuesday and posted pictures online, which could not immediately be verified by Reuters.

Chinese social media was abuzz with both trepidation about potential conflict and patriotic fervour, and the topic of Pelosi’s visit was the top-trending item on the Twitter-like Weibo.

Most of Pelosi’s planned meetings, including with President Tsai Ing-wen, were scheduled for Wednesday, a person familiar with her itinerary said.

Four sources said Pelosi was scheduled to meet a group of activists who are outspoken about China’s human rights record on Wednesday afternoon.

Earlier on Tuesday, Pelosi visited Malaysia, having begun her Asia tour in Singapore on Monday. Her office said she will also go to South Korea and Japan, but made no mention of a Taiwan visit.

Taiwan’s foreign ministry said it had no comment on reports of Pelosi’s travel plans.

China’s foreign ministry reiterated its opposition to a Taiwan visit by Pelosi.

“Faced with reckless U.S. disregard of China’s repeated and serious representations, any countermeasures taken by the Chinese side will be justified and necessary, which is also the right of any independent and sovereign country,” spokesperson Hua Chunying told a daily briefing in Beijing.

Beijing’s responses could include firing missiles near Taiwan, large-scale air or naval activities, or further “spurious legal claims” such as China’s assertion that the Taiwan Strait is not an international waterway, White House national security spokesperson John Kirby told reporters in Washington on Monday.

“We will not take the bait or engage in sabre rattling. At the same time, we will not be intimidated,” Kirby said.

China views visits by U.S. officials to Taiwan, a self-ruled island claimed by Beijing, as sending an encouraging signal to the pro-independence camp in the island. Washington does not have official diplomatic ties with Taiwan but is bound by U.S. law to provide the island with the means to defend itself.

A visit by Pelosi, who is second in the line of succession to the U.S. presidency and a long-time critic of China, would come amid worsening ties between Washington and Beijing.

The White House has dismissed China’s rhetoric as groundless and inappropriate.

Kirby said that nothing about Pelosi’s possible trip changed U.S. policy toward Taiwan, and that Beijing was well aware the division of powers within the U.S. government meant Pelosi would make her own decisions about the visit.

“The speaker has the right to visit Taiwan,” he told the White House briefing.

During a phone call last Thursday, Chinese President Xi Jinping warned U.S. President Joe Biden that Washington should abide by the one-China principle and “those who play with fire will perish by it”.

Biden told Xi that U.S. policy on Taiwan had not changed and that Washington strongly opposes unilateral efforts to change the status quo or undermine peace and stability across the Taiwan Strait.

Beijing considers Taiwan to be part of its territory and has never renounced using force to bring the island under its control. Taiwan rejects China’s sovereignty claims and says only its people can decide the island’s future.

Accustomed to being caught in the middle of China-U.S. tensions, people in Taiwan expressed mixed views on a Pelosi’s visit.

“Regarding China’s statements or hateful comments, this has actually always been like that. So, we look at it with peace of mind and are not overly scared,” Yang Hsing-ruel, a 22-year-old university student, said while expressing hope that the visit would bolster ties between Taiwan and the United States.

“In the end we are just a chess piece in someone else’s game,” he said.

By Yimou Lee and Sarah Wu